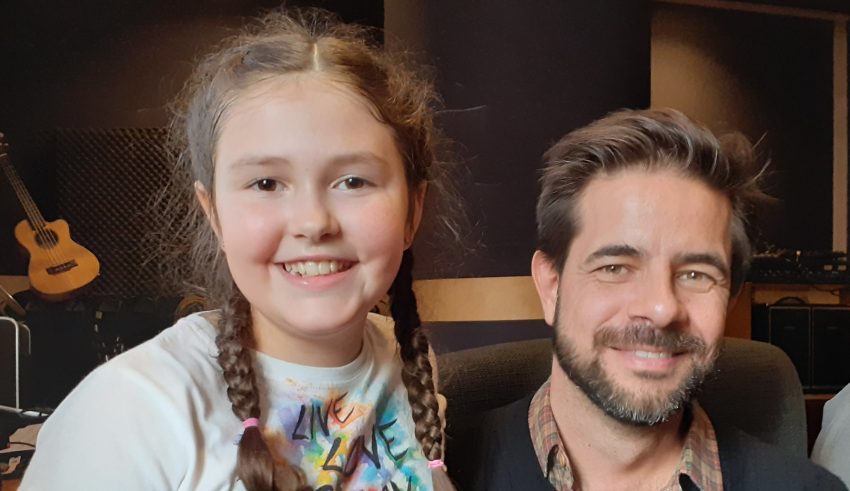 It’s 7 days to go until Junior Eurovision 2019, and we are counting down the 19 nations who are participating in Gliwice-Silesia on Sunday, November 24, 2019.

Next up we check out Portugal, another nation that took a decade off after flopping early on.

Born in Paços da Serra, Gouveia, 10-year-old Joana Almeida has a raft of Portuguese singing contest awards under her belt. Her impressive resume can be found here.

Almeida had a narrow escape from the forest fires that ravaged Portugal in 2017, with fast moving fires killing 66 people. She posted this in the YouTube comments of her official video: “Hello everyone. I lived running away from the fires in Portugal in 2017, I wish my song to be an appeal, a hymn to the union to save the planet. United we are stronger, Nature needs us is our most precious asset, our home – mother … I want no one to have to be afraid again with I had … kisses from Portugal to the World.”

Joana told junioreurovision.tv that her song “It speaks of nature and environment and how, all together, we can help saving the planet, our home.”

“Vem Comigo” was written by and produced by João Pedro Coimbra, a famed drummer and percussionist in Portugal who went on to become a prolific award-winning performer, writer and producer.

This is what our editors had to say about “Vem Comigo”:

Boris – 7 – “Every year there’s at least ONE obvious bottomfeeding entry with an astronomical “Aww Bless” factor and this year that award goes to Portugal. The aggressive synths to mask that the arrangement is exactly like “O Jardim” <3 Joana’s cat-eared fedora is an A+ prop <3 the BIZARRE key+language change between chorus and verses <3 And there’s no chance it will finish last because France and Spain participate. LOVE.”

Connor – 4 – “Finally we have a song from Portugal that isn’t about Social Media, what a treat! This is a welcome departure for Portugal, but I feel like there’s a big rift happening in the song. Joana has this really cute and sweet song, and it doesn’t work with this electro pop track they’ve paired it with. I feel like it could be so much better with an orchestration track. The chorus and melody are also really…..lackluster. It just sounds like a 3 minute musical clash.”

Daniel – 5 – “This song gets high marks for the musical elements, it sounds very modern, particularly for Portugal in JESC. My issue seems that the lyrics feel more forced into the music rather than integrated into the music. A nice message that seems like the unofficial theme of this year.”

James – 8 – “There’s a duality to this song that I like – the beat and the keyboards from the go give a sense of impeding doom, but there are moments of light puncturing it by way of Almeida’s vocals and the optimistic lyrics. Production and tone wise, it reminds me of Ladytron’s “You’ve Changed,” the album cover its from also referencing the horrifying forest fires of 2017 in Portugal that killed 66 people. Almeida herself talks about these fires, and I think this song perfectly captures the panic of an approaching fire while simultaneously keeping in mind that we will get through this. If ever a song wants to convey a message of clarity and purpose in the face of imminent demise it’s “Vem Comigo.””

Melanie – 3 – “Joana is sooo adorable and she can sing. But this song is a complete mess. The production is really
weird that it sometimes feels a little bit uncomfortable listening to it. And that’s too bad, because it has a great message.”

Roy – 1.5 – “Ayee, it is time for my lowest rating of this years Junior Eurovision. I’ve been waiting to write about this song since I think it is absolutely foul what they did to poor Joana. Her vocals are literally the only  points that I can give to this. They will probably also be decent to good live, but WHAT ON EARTH did they do with the melody production. This is how it probably went down: “Let’s start with a simple kick, okay perfect. Now let’s add a few synthed-up snares. That’s already a great (read bad) base for the song. Ooh god damn it John the gardener, stop using that leaf blower while we are producing a song. Actually, do that again! Yeah, let’s distort it a bit and add it to the base. Perfect, the song is done together with Joana’s vocals.” And it is an absolute atrocity! I don’t get that somebody gave the green light for this production. What was Portugal thinking? I feel bad for Joana!”

Sean – 5 – “Oh, this is so disappointing. Musically this is one of the most interesting songs in this year’s contest and the dark, brooding electronics backing this track are really intriguing to me and fits in with a lot of the music I would choose to listen to outside of Eurovision. But… it just doesn’t work with the song. Joana’s vocals aren’t suited to this type of backing and the lyrics really stick out like a sore thumb against a track like this. It sounds cobbled together and unfinished, which isn’t exactly Joana’s fault.”

Stefan – 3 – “I just want to pinch her chubby cheeks. 😊 When the song started I really had high hopes, but as the music continued to play it became monotonous. Unfortunately I think this will flop so hard. Bottom three material.”

Fourteen countries in, here are our current rankings:

We had two positive reviews (for two very different reasons), but unfortunately “Vem Comigo” did not click with the majority of our editorial team. Carla still maintains the lead with a 9.0 average, and five countries remain in our series.

What do #YOU think of “Vem Comigo?” If #YOU liked or did not like the song, what reasons do #YOU have for that? Let us know in the comments below, on our social media, or in our forum.