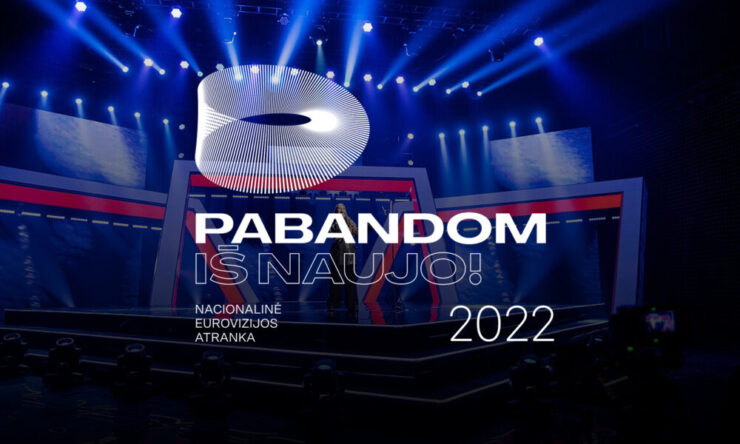 Tonight, another nation kicks off their search for the latest Eurovision star for Turin – the first in a long line of shows in Lithuania’s favourite music contest Pabandom iš Naujo! takes place, with heat one of the selection show being aired on LRT!

The selection show, which was revamped in 2020 to replace the lengthy “Eurovizijos” dainų konkurso nacionalinė atranka process, will see 11 acts perform their songs for the first time to the Lithuanian public. The 11 acts competing tonight are;

Basas Pegasas were due to perform in this heat, instead their song “Ponai” will be showcased in next weekend’s show.

There are a number of familiar faces in tonight’s heat. Erica Jennings is familiar to Eurovision fans as the lead singer of the group SKAMP who represented Lithuania in Eurovision 2001 with “You Got Style”, finishing 13th on the night. Voldemars Petersons is a veteran of the Lithuanian selection shows, having competed in each selection since 2019 and finishing third last year behind Gebrasy and eventual winners The Roop. Algedunda also returns to the competition, having taken part in the Lithuanian selection twice before.

Tonight’s heat will be hosted by Ieva Stasiulevičiūtė, Giedrius Masalskis and Richardas Jonaitis. Six acts will qualify from tonight’s heat from a combination of televoting and jury voting during the show. Pabandom iš Naujo! will take place from 20:00 CET and #YOU can follow all of the action from Lithuania on LRT’s live stream HERE.

Lithuania will be hoping to follow up a successful Eurovision year in 2021, where The Roop made it third time lucky making it to the contest. “Discoteque” was an infectious hit in Rotterdam, earning 8th place and the Baltic nation’s second highest finish in the contest, having participated since 1994.

Who are #YOU looking forward to in tonight’s first Lithuanian heat? Share your thoughts with us in the comments below and on social media, or join in the discussion with other Eurovision fans over on our forum HERE or on our dedicated Discord server HERE!