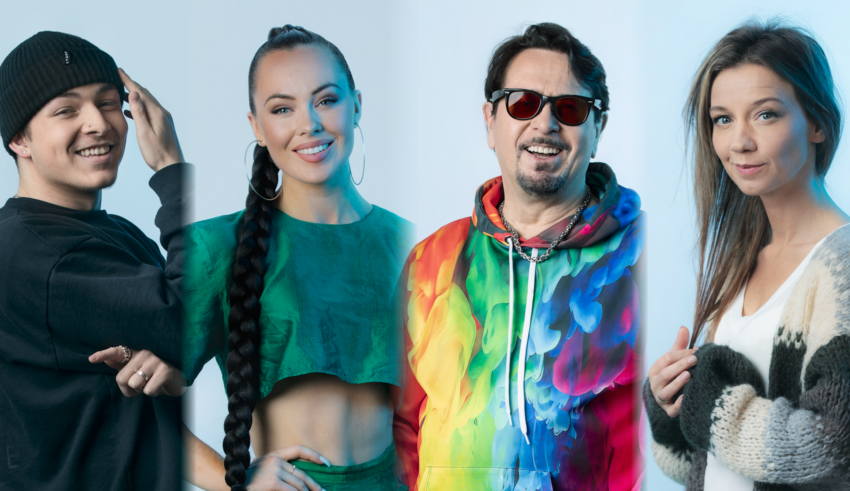 Tonight, Norway will continue their search for Eurovision 2021 as four more acts take to the Melodi Grand Prix stage in Fornebu. But which of the four acts deserves their final shot most, and what did our team think of the potential entries?

Before we dive in, make sure to vote in our poll below, and we’ll reveal YOUR favourite before the show takes place this evening!

Time to see what our panel of editors thought of this evening’s songs!

Daniel – 6.5 – “This is a very traditional pop that has a modern twist. It is a bit repetitive and at times a bit cliché. I think this song has strong compositional elements but still is just a little bit to banal to make a huge splash in Rotterdam. I really do not like the intro or the end portions, it seems a bit haphazard and a little bit awkward of a transition.”

James – 3 – “For a hip-hop song called “Psycho,” this is really boring. Maybe “Lurpy” would have been better? You’d think for a song about a fella who spots a lass who makes him crazy there’d be more excitement in the track. Lyrically, this is in James Blunt “You’re Beautiful” territory as it is likely he has never actually met the girl of his fantasies except maybe, at best, she eyed him while waiting in line at the club’s toilets. Daniel then fantasizes about whether she thinks about him and whether she’s going to post more photos online for him to… yeah, not going to go there. Another weird part is that he has pals chiming in a “choo” and “yeah” here and there, which is strange for a song about a guy fantasizing that maybe the girl in line for the toilets is thinking about him.”

Melanie – 6.5 – “This teen heartthrob is bringing some attitude to this national final! I think this is my favorite of this semi-final. It’s not flabbergasting, but I don’t mind it at all. It makes me wanna dance every time the song starts playing. The beat is catchy and I think the overusage of the word “Psycho” is elevating the catchiness of the song. Hopefully he will combine the song with a good choreography, otherwise it will stay a mediocre catchy song. Nevertheless, in this semi it’s the best!”

Sean – 7.5 – “Oh man, that intro got my so hyped up for a glitchy alt-pop banger (would have been a 9 heading to a 10), but it instead dissipates into Benjamin Ingrosso lite. That’s not necessarily a bad thing; “Psycho” has some nice plinky electro licks and a catchy chorus, and everything lends itself to a smooth, choreographed-to-death performance. But I’m not convinced this is the formula for success in 2021, especially when this year’s MGP already has promise to be a very strong selection.”

Stefan – 4.5 – “Very repetitive, bland and something what we have heard so many times, but it is radio friendly. Toxic relationship might as well be appropriate title for the song.”

Ketil Stokkan – My Life is OK

Daniel – 5.5 – “This is such an interesting composition. It has strong elements of a 60’s love rock ‘n’ roll song. It is a song of empowerment with very relevant lyrics that seemed a bit shunned by the optimistic beat of the song. This is a unique entry, no doubt about that, it is just not the cup of tea I was looking for. It is a cute song that I think most people will forget after the first listen. It seems like a nursery rhyme really.”

James – 1 – “Oh Lord, where to start with this? First off, not a good look to use the OK hand gesture that has been co-opted by the alt-right and neo-Nazis since 2016. Give it a few years for its recent association to fade back to the benign, original meaning. I am going to assume Ketil used it in the original “OK” sense with no intent of trolling. As for the lyrics, I don’t get what the point of this song is. He’s a Eurovision elder statesman already and we respect him for his two appearances thus far, so why do we have to witness him being on the defensive against some strawman in his head accusing him of being racist, a man of faith, etc.? No-one’s trying to make Ketil change his ways, so chill out. With the lyrics being sang over that schlager track, this is what “Old Man Shouting at Clouds” sounds like at MGP. “Romeo” was more than OK, but this song is a huge misfire.”

Melanie – 5.5 – “Sometimes you have such song that you don’t know if it would be accepted if you appreciate it. My Life is OK is that kind of song. Something in my head says that this is really bad and I have to throw it away in the trash bin, but someone in my head also says that this is amazing! I’m really divided about what I think about it. Is it a jam? Yes it is! But does it also sounds like a song that’s written by a elementary kid? Also yes. I JUST DON’T KNOW WHAT I NEED TO THINK ABOUT IT! So for me, it now hangs in the middle.”

Sean – 5.5 – “Okay, listening to this intro is decent. Seems like a really catchy rockabilly inspired track that I can dig… ah. Okay. It stays like this the whole time it seems. Ketil says it best, when he says his “music is OK”, but it doesn’t seem to have moved on from his previous Eurovision exploits in 1986 and 1990. It’s not offensive but it certainly is uninspiring and it’s going to take a hell of a performance to make this one stand out this year.”

Daniel – 8 – “This sounds like a Nordic fairytale and adds a very interesting flavor to this heat. It has a very ethereal value to it that makes it so easy to listen to. The string instruments and harmonica make the song something rather unique. I feel like this is not a winner, but it definitely has such strong merits based on its musicality and I think having the MGP platform will be great to bring back those “Secret Garden” style elements back to the forefront of Norwegian music.”

James – 9 – “A simple yet beautiful acoustic Northern folk song where she asks her down on his luck, low on spirit lover to follow the Northern lights and return home. Additionally, in the context of this heat, it reads as an appeal to a fellow heat contestant who went dark, with the “you have lost your courage and hope, they disappeared together with your lovely smile,” even though it was obviously not aimed at him. Given 2020, this is a gently sweet reminder that not all hope is lost and that even in the darkness of night you can find the light that will lead you home.”

Melanie – 5.5 – “This sounds like a very cosy song! The Northern Norwegian that she sings sounds so lovely and her voice sounds like a warm hug. The song itself is a bit too slow for me. I’m really try to get into it, because I love the vibe she’s creating, but the pace of the song just doesn’t work for me. I just need some more variation in the beat. Hopefully she will come back at Melodi Grand Prix with a better song, because she has an amazing voice.”

Sean – 5 -“Knowing what I know about a certain subset of Eurovision fan taste, this will be absolutely ADORED by some, and it’s a very soothing lullaby that I can really appreciate. It’s not something I would really want to actively listen to, but Maria has a wonderful tone to her hushed vocals, and this has the best chance of really capturing an atmosphere when performed live.”

Stefan – 1 – “So this is the ballad entry of the second semi-final. There are good ballads and there are boring ballads. This is the latter. And I don’t get what’s with Norwegian people and country music. This song just isn’t my cup of tea, sorry but it’s a NO from me.”

Daniel – 9.5 – “The 80’s influences are so palpable. This girl really knows when she needs to be on top of those trends, first it was that Fuego-esque Wild and now the Blinding Lights-esque Hero. This song is pop perfection, and she will most certainly do it justice in the live performance. I think that this song is just so topical, easily digestible, and really entertaining. I am thoroughly enjoying this song and would love to see it succeed at MGP. I am big fan.”

James – 6 – “Beware the white knight who promises to solve all your problems and step in to be your savior. That is the moral of Raylee’s “Hero” – she’s doing fine by herself. One gripe I do have about this song is that it is clearly hearkening back and trying to respond to Bonnie Tyler’s classic “I Need a Hero” with its ‘80s retro synth and that shoddy attempt at a guitar solo. The imagery in Tyler’s song makes it clear her hero is one in a sexual fantasy, and not the spotty male college activist who thinks he knows what’s best for women.”

Melanie – 6 – “Our Wild girl is back this year in the form of a hero! Raylee is bringing us 80’ synthpop this time. I’m a really big fan of using synths in a song, but somehow this song is just a little brave for me. I expected just something wilder from her. This is a brave, cute pop song, but doesn’t shine enough to leave an unforgettable impression on me. Hopefully she still can bring me over with an choreography full of energy. But till then, it’s a meh for me.”

Sean – 7 – “S y n t h wave to ~vibe~ to [NIGHT TIME DRIVING PLAYLIST] – or at least that’s what this feels like. It’s a very 80s pastiche and not what I was expecting from Raylee at all. “Hero” is a competent attempt at the revival of this genre but it doesn’t break any new ground (or even old ground) and while it always threatens to kick it into a new gear and disappear into the neon sunset, it never quite gets there. This will be bumped up in my estimation if the performance is suitably colourful and retro-tastic.”

Stefan – 7.5 – “Quite a set back from last year’s entry. I prefer melody over the lyrics. Also, am I the only one hearing Bonnie Tyler’s “I Need a Hero” or is it just that 80s kinda vibe? Anyway, I expect much more…”

It seems that our team have a clear winner, and believe that Raylee should make it to the Melodi Grand Prix final with “Hero”! But is this also what #YOU think?

What do #YOU think of tonight’s Melodi Grand Prix songs? Share your thoughts with us on our forum HERE or join the discussion below and on social media!