Home 2021 Sweden: Tusse makes his “Voices” heard, and wins Melfest in a landslide 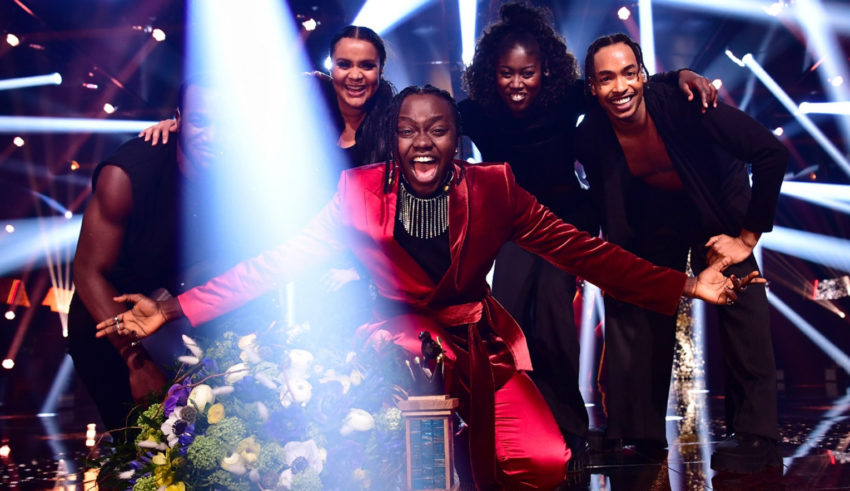 And so it ends! Melfest concluded tonight, ending what was a short, but evenful National Finals Season. With Melodifestivalen ending, we add another contender to our list: Former Idol winner Tusse Chiza won the Swedish spectacle show with his song “Voices”. However, before Tusse was crowned, he still had a show to watch.

Tonight’s line up was as follows:

Going into the show, Tusse was the favourite of the Oddsmakers, with Eric Saade close behind in. Clara Klingenström, the revelation of this Melodifestivalen, has been creeping up on the pair however, recently passing Saade in spotify listens.

This Melodifestivalen also marked the end of Christer Björkman‘s tenure as Melodifestivalen’s executive producer. Due to this, Björkman co-hosted every live show, announcing every participant in person, flanked by one or two guest hosts. For the finale, these were none other than Måns Zelmerlöw and Shima Niavarani.

When the jury points were announced, Tusse ended up with a mild 10 point lead over his primary rival, Eric Saade.

However, for the first time since the introduction of the app vote, Tusse each of the eight demographs, securing the maximum of 96 televote points.

Numerically Tusse did even better, scoring 2.94 million votes, pulverizing The Mamas’s previous record of 1.6 million. The Mamas also scored more votes than previously, receiving 1.64 million votes. Dotter and Eric Saade round up the top four, with 1.48 million and 1.47 million each.

By crushing the televote, Tusse handily won Melfest 2021 with 175 points over Eric Saade‘s 118. The Mamas, the winners of the previous Melfest, finished in a respectable third place with 106 points. Dotter, runner-up of the previous Melfest scored a fourth place with 105 points. (notably being beaten out by The Mamas by one point again), while season revelation Clara Klingenström (91 points) snagged the final top 5 spot over fellow AC-qualifier Klara Hammarström. (79 points)

Tusse Chiza was born in 2002, in the Democratic Republic of Congo, and emigrated to Sweden at a young age as a refugee. Eventually, he and his family reunited and settled in a small Swedish village. In 2019, the 17-year old participated in Swedish Idol and won the competition. “Voices” marks his first appearance in Melfest, and soon it will become his first appearance in Eurovision as well.

You can listen to the song below:

Sweden is set to participate in the first half of the first semifinal on 18 May 2021. There, their main competition will be Lithuania, Belgium and Australia, amongst others.

Are #YOU pleased with Tusse winning in Sweden? Or would #YOU have liked to have seen someone else win instead? Join the discussion on social media, in the comments or on our forum HERE.

PS: Personally, I really loved Tusse’s reprise afterwards, and I wouldn’t want you to miss it for the world. Enjoy: