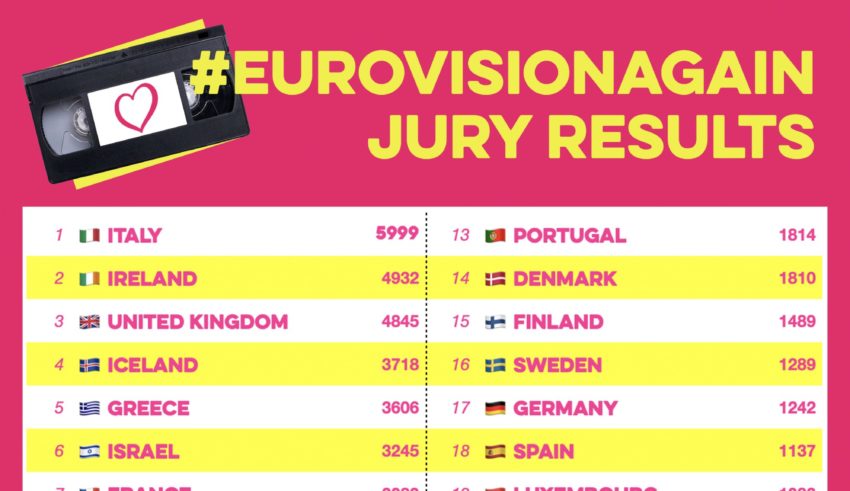 On Saturday, August 21st, #EurovisionAgain hosted its 9th viewing since switching to a monthly format in July 2020. The official Eurovision YouTube channel streamed the 1992 contest held in Malmö, Sweden. The winner of that contest was Linda Martin from Ireland with the yearning, romantic ballad, “Why Me?”. It was written and composed by Eurovision 1980 and 1987 champion Johnny Logan. At the time, this gave Logan his record 3rd win.

As usual, #EurovisionAgain organizers held online fan voting. Fans were asked to rank their ten favorite songs. Points were allocated in accordance with the current Eurovision format, with a 1st place ranking worth twelve points, and so on.

The winner of the fan voting was Italy, with the mournful ballad “Rapsodia”. The song was performed by Italian music legend Mia Martini, who previously represented Italy at Eurovision in 1977. Ireland finished 2nd. The UK finished 3rd, with the Michael Ball-sung pop ballad, “One Step Out of Time”.

The results were tight until the end. The official #EurovisionAgain Twitter account claimed, at one point, that only seven votes separated two of the three songs at the top of the pack.

It is unclear how long the high quality copy of the 1992 contest will remain live on the official Eurovision YouTube channel.  Past #EurovisionAgain contests have traditionally remained uploaded for one month.

Which song do #YOU think should have won at the 1992 contest? What past contest would #YOU like to see spotlighted by #EurovisionAgain? Let us know in the comments below, on our forum page, or on social media @ESCUnited.