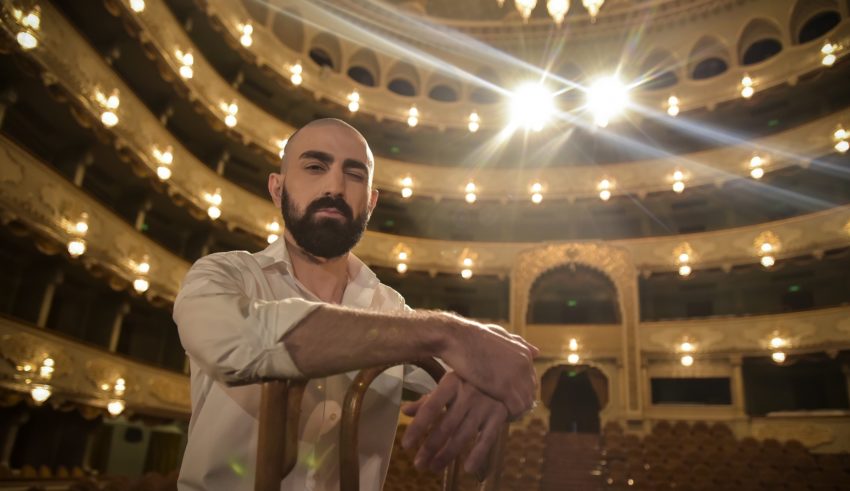 Next up, we take a look at the man who stepped into the temporary role of vocalist for his band, before really owning the role and winning competition after competition in his country of Georgia. It’s Tornike Kipiani!

Who is Tornike Kipiani?

Born on 11th December 1987 in the Georgian capital of Tbilisi, Tornike Kipiani is a versatile singer who predominantly works in rock genres.

Tornike’s musical journey began while he was young. As a child he would study piano and violin under instruction of his parents, but soon gave this up as “he did not like it” and was more into hip hop and rap music, citing Eminem and Dr Dre as early influences before he began to study music once more. Tornike formed a band at the age of 19 and acted as the group’s guitarist, but when the band was unable to find a suitable vocalist, Tornike decided to step in temporarily, starting his burgeoning career as a vocalist.

Tornike worked as a professional architect, “because my parents wanted something good for me” he told the “Reitingi” magazine in 2014; “Architecture is also a beautiful art, but music is more mine, I think.”

In 2012, Tornike joined the talent show “Magtifan”, having initially attended auditions to support a friend on the guitar. He was urged to audition by the panel and eventually finished in the top five of the contest.

Kipiani got his big break after auditioning for the Georgian version of The X Factor in 2014, shown on the channel Rustavi 2. He impressed with his rock-inspired performances of various pop songs, particularly a cover of Kylie Minogue’s “Can’t Get You Out of My Head” which racked up over a million views on YouTube, and was the only performer to sing a Georgian song on the first live show of the competition.

Tornike was mentored through the competition by Georgian-Greek singer Tamta (who represented Cyprus at Eurovision in 2019) and was eventually named as the winner of the inaugural season.

How did Tornike get to Rotterdam?

Georgia decided to continue using the Georgian Idol competition as its selection show for Eurovision 2020, having previously used the competition to select the winner Oto Nemsadze in 2019.

The panel for the competition consisted of Tinatin Berdzenishvili, the director general of the Georgian national broadcaster GPB, David Evgenidze, songwriter and jury panellist for Georgia’s Junior Eurovision selection Ranina, Natia Todua, winner of The Voice of Germany and a participant in Germany’s 2018 national selection, and David Aladashvili, a pianist and television host with several international honours in his field.

Tornike auditioned in the second show of the competition on 2nd November 2019, performing “House of the Rising Sun”, a traditional folk song that was also made famous by The Animals in the 1960s. Tornike successfully advanced to the next round,where he performed Nirvana’s “Smells Like Teen Spirit” and made it through once more.

Over the course of the live shows throughout November and December, Tornike continued to pick up support and in fact led the voting from the second week onwards, eventually emerging victorious ahead of Barbara Samkharadze in the final show on 31st December 2019.

As a result, Tornike Kipiani was selected as the Georgian representative for Eurovision 2020, and work set about to select a song for him. The inventive rock song “Take Me As I Am”, which depicts Tornike asking to be allowed to be himself and not trying to act like someone from another country or background, was unveiled on 3rd March 2020.

Unfortunately, the COVID-19 pandemic hit, and the contest was cancelled on 18th March 2020. The next day, Georgia’s broadcaster GPB confirmed that Tornike would remain the Georgian representative at the 2021 contest, and he set about working on a new entry with collaborator Aleko Berdzenishvili.

The entry, the more serene blues ballad “You”, was finally revealed on 15th March 2021, the final day of submissions for the contest.

How has Tornike been preparing for Eurovision since selection?

Tornike has been keeping a low profile on much of his social media and in the news with regards to his preparations for Rotterdam, opting to stay domestic and not taking part in any of the online preview events. He shared his admiration of the Swiss entry for this year with his Facebook followers on March 26th, and five days later shared that he was working on an acoustic version of the entry with the Tbilisi State Conservatoire.

He also re-shared a performance that was recorded in November 2020, performing at the Enguri Dam in northern Georgia.

Ahead of the first semi-final of the contest, Tornike visited the Georgian embassy in the Netherlands.

Georgia’s Tornike Kipiani will perform “You” in the second semi-final of Eurovision 2021 on May 20th, performing tenth on the night.

What do #YOU think of Georgia’s entry for 2021? Share your thoughts on this article in the comments below, on our forum HERE and on social media!