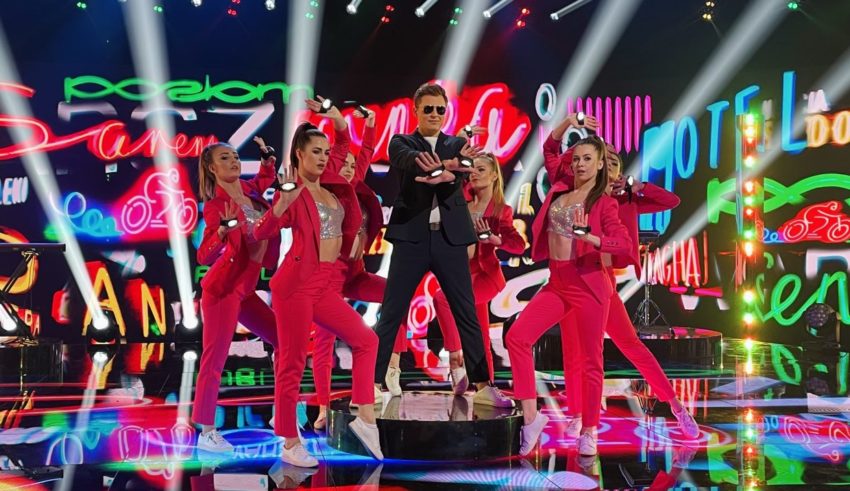 Today we’re taking a look at a man who is no stranger to the contest, having co-hosted last year’s Junior Eurovision Song Contest and narrowly coming close to representing his country before. It’s RAFAŁ from Poland!

No stranger to Eurovision circles, Rafał Brzozowski is a Polish singer and television presenter who has been active in his home country in the last decade.

Born on 8th June 1981 in Warsaw but raised in the town of Nowy Dwór Mazowiecki to the north of the capital, Rafał began his musical career at an early age with piano lessons as a child. During his teenage years, he performed at weddings and garrison clubs and learned to play the guitar while studying at a musical school. He began performing in K. Martin, a group formed by musician Marcin Kiljan and also diversified his experiences in the industry by working as a music presenter and announcer.

His first foray into the music business in TV was as a participant in Szansa na sukces in 2002, earning a distinction for his performance. The show would later go on to select Poland’s Junior Eurovision 2019 and Eurovision 2020 participants. In 2003, Rafał joined the famed Polish rock band Emigranci, recording an album with their reformed line-up. He would later link up with another Polish rock group, De Mono.

Rafał majorly stepped into the spotlight by taking part in the first season of The Voice of Poland in 2011, making it to the semi-finals before being eliminated. Following his participation in the competition, Rafał launched a solo career, releasing his first two singles “Nie mam nic” and “Na dobry jest świat me”.

In 2012, his song “Tak blisko” became a hit in Poland, reaching #2 in the airplay charts and preceding his debut album of the same name which reached #12 in the Polish album charts in August 2012. Over the next few years, Brzozowski would continue to release a string of singles and three more albums including a successful covers album called “Moje serce to jest muzyk, czyli polskie standardy” (My heart is a musician i.e. Polish standards).

In 2017, Rafał moved into presenting with a role fronting the TVP2 gameshow Kolo Fortuny, the Polish version of Wheel of Fortune, and later begun presenting The Voice Senior for over-60s performers in 2020.

How did RAFAŁ get to Rotterdam?

Rafał has now had a long-standing relationship with the Eurovision Song Contest, and first attempted to represent Poland in 2017 with the pop ballad “Sky Over Europe”. He finished second behind the eventual Polish representative Kasia Moś.

Later in 2017, he would be chosen to host the national selection for Poland at that year’s Junior Eurovision Song Contest, and would form part of Poland’s voting jury at Eurovision 2019 in Tel Aviv.

In 2020, he was chosen by the Polish broadcaster TVP as one of the three main presenters of Junior Eurovision 2020, held in the TVP studios in Warsaw due to the ongoing COVID-19 pandemic that led to various restrictions across Europe.

With mystery surrounding Poland’s entry for Eurovision 2021 and with TVP keeping their plans secret until late February, it was confirmed that the broadcaster would internally select a song and entrant for this year. On 12th March 2021, RAFAŁ (as his new stage name) was confirmed as the representative in Rotterdam with the heavily synth-inspired 80s pop song “The Ride”, with the music video receiving its official premiere on the Eurovision YouTube channel at the same time.

How has RAFAŁ been preparing for Eurovision since selection?

RAFAŁ has been heavily involved in promotion for Eurovision since his selection, enlisting the support and help of some of this year’s other acts in the process.

RAFAŁ and the Polish delegation welcomed San Marino’s Senhit to Poland in mid-April, with the duo performing ABBA’s Eurovision winning classic “Waterloo” on Polish TV, before RAFAŁ performing his Eurovision song at The Voice Kids in Poland on April 17th.

In the build up to Rotterdam, he has also been hosting various Instagram Live Q&A sessions with various participants, including Anxhela Peristeri (Albania 2021), Tulia (Poland 2019) and Polish singing legend Edyta Górniak (Poland 1994). He then launched a competition on Instagram encouraging his followers to post creative pictures of them wearing sunglasses and mimicking “The Ride”.

On May 3rd, Rafal shared his thoughts on the preparations for Rotterdam with Polish media; “I was a bit distrustful and I didn’t quite know what was happening, especially since from that moment everything started to roll very quickly – shooting a clip, photo sessions, media attention… I’m used to working on the set, but I admit that even for me this pace it was insane! Now I’m looking forward to the show!”

Poland’s RAFAŁ will perform “The Ride” in the second semi-final of Eurovision 2021 on May 20th, performing sixth on the night.

What do #YOU think of Poland’s entry for 2021? Share your thoughts on this article in the comments below, on our forum HERE and on social media!