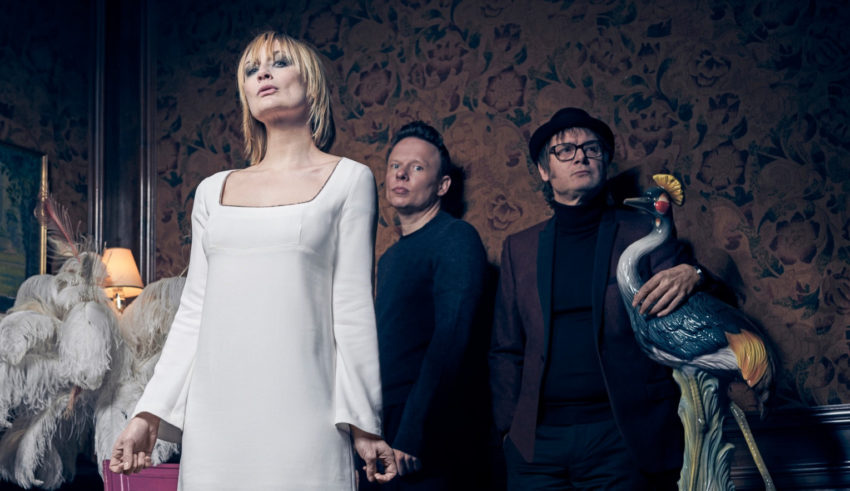 Next up, we take a look at one of the biggest names in this year’s show. With over two decades of hits and having cemented their name in Belgian music history, will we see Hooverphonic add a success at Eurovision to their list of achievements?

Bear with us on this one – explaining Hooverphonic’s history gets a little complicated.

Formed in October 1995, Hooverphonic are one of the biggest names in the music business in Belgium and the surrounding area, and their trip hop and alternative stylings have ensured they have been a mainstay in the Belgian scene for over two decades.

The driving force behind the band is the duo of Alex Callier (born 6th December 1972) and Raymond Geerts (born 1st December 1959). Alex Callier studied sound engineering in the Rits School, Brussels, and also attended several music classes in his home town of Sint-Niklaas and Antwerp. Between 1994 and 1997, Callier worked as a sound engineer for the Belgian broadcaster VRT, where he met future keyboard player for Hooverphonic, Frank Duchêne.

Raymond Geerts started out as a youngster playing the drums, but soon moved on to guitar, a role which he has performed for Hooverphonic since its foundation. While playing in a band in Sint-Niklaas in the mid-90s, Geerts came into contact with Callier and Duchêne. The trio decided to work together, forming the short-lived group The Love Letter Boxes before writing “Inhaler”, the first song by Hooverphonic.

While Callier and Geerts have been the constants in the Hooverphonic line-up since 1995, there have been a number of vocalists that linked up with the band during their career. Founding vocalist Esther Lybeert left the band as they were ready to sign a deal with Sony Music in 1996, and was replaced by Liesje Sadonius, who herself left the band after their debut album “A New Stereophonic Sound Spectacular”. Kyoto Baertsoen filled in the vocalist role temporarily as the group toured Europe in 1997, before the band eventually settled on the band’s most recognisable vocalist Geike Arnaert later that year.

Keyboardist Frank Duchêne left the band in 1998 – “Having made two successful albums for Sony Music with his band Hooverphonic, and after extensive touring as support for Fiona Apple, Moloko & Massive Attack, he was unhappy with the project and near the end of 1998, decided to leave.”

Frank’s departure left Callier, Geerts and Arnaert as a three-piece, which became the most well-known line-up of Hooverphonic, remaining together until Geike Arnaert left the group in 2008. The band released five albums in that time, each charting within the top 10 of the Flemish and Walloonian charts in Belgium and with a vast array of singles charting within the country in that time.

Arguably their most famous song is 2000’s “Mad About You”, from the album “The Magnificent Tree”, which exemplified the band’s trademark trip-hop sound and became a hit domestically and also charted in France, Italy and the United Kingdom. The song was also featured in a number of films and has appeared in other TV shows as recently as Netflix’s “The Umbrella Academy” in 2019.

How did Hooverphonic get to Rotterdam?

Hooverphonic have been waiting longer than any of this year’s acts to set foot on the Eurovision stage, with Belgian broadcaster VRT announcing their internal selection as the Belgian entrants for the 2020 contest on 1st October 2019 – the first artists confirmed for the contest at the time. At the time of their election as the Belgian entrant, the group confirmed they had only agreed to represent Belgium at the contest as they had found the “perfect song”.

The group’s entry for Rotterdam 2020 was confirmed as “Release Me” on 17th February, a down-tempo song that bore many of the hallmarks of Hooverphonic’s style. The song would ultimately not go to Eurovision due to the cancellation of the 2020 contest on March 18th due to the COVID-19 pandemic. On 20th March, the band agreed to try again in 2021.

The band stirred minor controversy in the Eurovision fan community in May 2020, as the only artist who did not wish to take part in the Eurovision: Europe Shine a Light replacement show; although an image of singer Luka Cruysberghs was shown during the collaborative performance of “Love Shine a Light”. In November 2020 it was confirmed that vocalist Luka Cruysberghs would be leaving the band, with the return of Geike Arnaert confirmed and the band returning to their most recognisable line-up.

Their second Eurovision entry “The Wrong Place” was eventually released on 4th March 2021, with an atypical time structure and a more upbeat feel than their 2020 song.

How have Hooverphonic been preparing for Eurovision since selection?

On March 10th, the group announced they would be embarking on a European tour later in the year, with dates in Paris, Munich, Berlin, Warsaw, Bratislava, Sofia, Bern and Istanbul among other locations.

The next day, a behind-the-scenes video regarding the music video shoot of “The Wrong Place” was revealed, showing how the band filmed the cinematic video. Hooverphonic performed on NPO Radio 2 and AVROTROS’s “Muziekcafe” live show on March 28th, giving a live performance of their entry for this year’s contest.

The band announced on April 21st that an exhibition to celebrate their 25th anniversary, “Mad About Hooverphonic” would be held at De Casino Concertzaal between May 8th and June 6th, which will feature memorabilia, historical instruments and stories about the band’s history, soundtracked by a new arrangement of classic songs and edits.

Their eleventh studio album “Hidden Stories” was released on 7th May, ahead of the band’s short trip to Rotterdam to rehearse and prepare for their performance in the first semi-final of Eurovision 2021.

Belgium’s Hooverphonic will perform “The Wrong Place” in the first semi-final of Eurovision 2021 on May 18th, performing eleventh on the night.

What do #YOU think of Belgium’s entry for 2021? Share your thoughts on this article in the comments below, on our forum HERE and on social media!