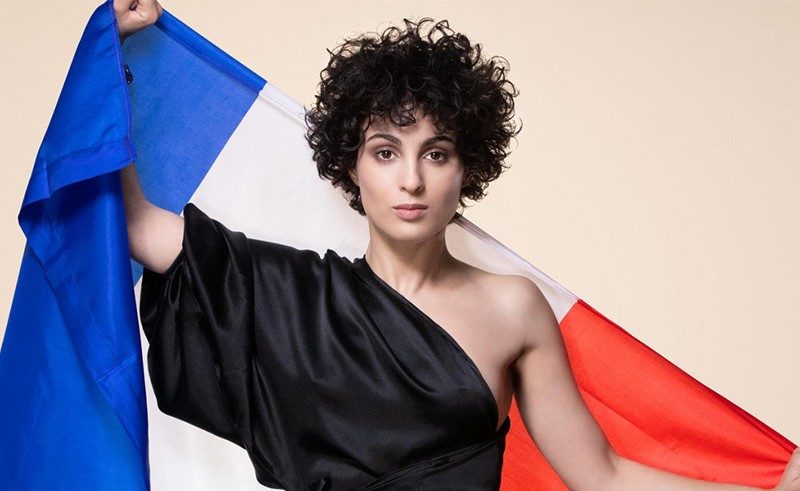 First up, we take a look at the career and journey of Barbara Pravi, from Junior Eurovision success to stepping onto the stage in her own limelight…

Who is Barbara Pravi?

Real name Barbara Piévic and born in Paris on 10th April 1993, Barbara Pravi is a French singer, songwriter and actress with roots in Serbia, Iran, Poland and North Africa through her grandparents, and hails from a multi-cultural musical family as a result. Her adopted stage surname comes from the Serbian word “pravi” which means real or authentic, and is a nod to her Serbian grandfather.

Not much is known about Barbara’s early connections with music, but it is clear she grew up in a family of artists and musicians in Paris. Barbara met with French musician Jules Jaconelli in 2014 and began to collaborate on music, with Barbara composing songs at this time. She signed a contract with Capitol Music France in 2015 and begun her professional recording career, singing on the soundtrack of the French version of the film Heidi. In 2016 she was spotted by famed music executive Valéry Zeitoun and was cast as Solange Duhamel in his musical “Un été 44”.

Her first official singer followed in 2017, a feminist anthem named “Pas grandir”, which saw Barbara singing in an electro-pop style. Barbara would later lean towards a more traditional chanson style of singing after initially experimenting with pop music. Since her beginnings as a performer, Barbara has also begun to make a name for herself as a hit songwriter, writing for Yannick Noah, Jaden Smith, Julie Zenatti and Chimène Badi. She often collaborates with Igit who took part in “Destination Eurovision” in 2018 with “Lisboa Jerusalem”.

Barbara is an advocate for women’s rights and this is often reflected in many of her songs. She was also involved in the recording of “Debout les femmes”, the official song for the French Women’s Liberation Movement. She also acts as an advocate against domestic violence which is another issue close to her heart and one she has personally suffered from previously, having also been invited to do a TEDx talk about the subject and its impact on her career.

How did Barbara get to Rotterdam?

France had internally selected their entry for Eurovision 2020, with Tom Leeb chosen to represent the nation with “Mon alliée (The Best in Me)”. After the contest was cancelled, it was confirmed that Tom would not remain the French representative going into the 2021 contest.

On 29th June 2020, it was confirmed that France Télévisions would be returning to hosting a national selection for the 2021 contest called “Eurovision France, c’est vous qui décidez!” and an open submission process was opened for the competition.

The submissions were closed on 30th September 2020, and after consideration of the candidates, the final twelve were revealed on 9th December.

Having previously been asked by the French broadcaster to go to Eurovision but declining as she felt she “wasn’t ready”, Barbara would be taking part in “C’est vous qui décidez” with “Voilà”, a song co-written by Pravi and Igit with Lili Poe.

The French selection was held on 30th January 2021, with two rounds of voting. Barbara made it to the superfinal alongside seven other acts, and won both the jury and the televote in this round to be selected as the next French representative for the Eurovision Song Contest.

How has Barbara been preparing for Eurovision since selection?

As with many of this year’s artists and due to the unique situation the contest is taking place in, much of Barbara’s promotion and preparation for the contest focused on the domestic market in France.

The official music video for “Voilà” was released on February 8th, and featured Barbara dramatically telling the story of the song through her interactions with faceless people on a train.

On February 21st, Barbara appeared on “La Boîte À Questions” on Canal Plus to answer questions about her career and Eurovision participation, before performing her Eurovision entry live on TV5 a few days later. After a delay, her EP “Les prières” was released on March 8th on all digital platforms and vinyl.

On April 2nd, Barbara teased preparations for her upcoming album, stating that work was coming along well on the next release. She also travelled to Spain to perform her entry in a mini-trip in early April. Barbara announced a show at Le Trianon for 1st February 2022.

On April 24th, Barbara performed “Voilà” for the Eurovision Spain PreParty ES before heading to Rotterdam for Eurovision rehearsals on May 12th.