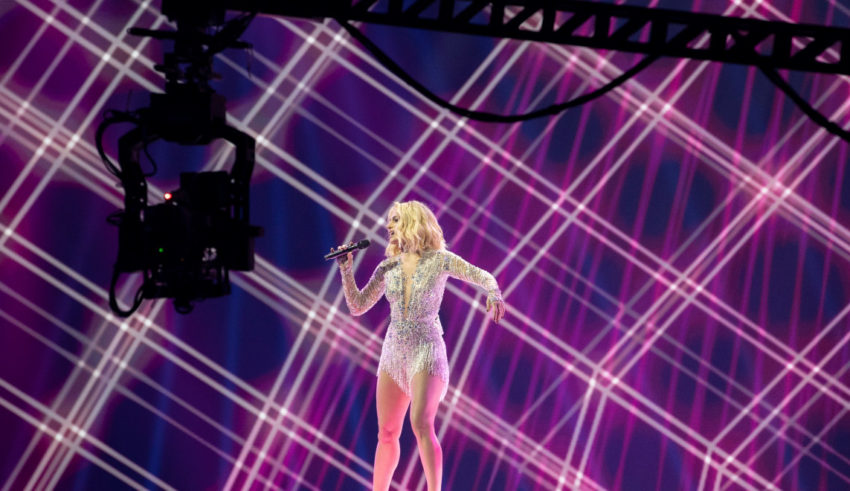 Moldova rehearsed. Did they give us some sugar? Well… it was more in line with “aspartame”, stress on the last syllable.

The seventh country took to rehearsals, with Natalia Gordienko “singing” Sugar on the Rotterdam stage. At the end of both performances, we are left wondering just one thing.

The stageshow features Natalia in a glitterdress, four dancers (in black) doing the same choreography from official music video. Only one simple stage prop adorns the screen: a square lazy susan, with Natalia position in the middle, and one dancer in the corner. Floral silhouettes are projected onto the lazy susan as it spins around.

It’s definitely a surprise from Moldova, a country known for their hilarious and literal staging concepts AND from Kirkorov who is known for backing his acts with resources and rigorous mentoring. It’s underwhelming coming after Poland.

Another question revolves around Natalia’s live performing talents. Indeed, the 2006 Eurovision veteran delivers a flawless dance choreography but she almost looks as if she doesn’t want to be there. At no point does she smile or engage with the camera. The contrast with Senhit and Stefania couldn’t have been greater.

Additionally, she barely sings any of her notes, miming the high note at the end. Is she saving her voice? Is she bored? Is it both? I honestly do not know which option it is.

Maybe Natalia Gordienko is the world’s biggest troll and secretly has an amazing voice and charismatic personality that she’s deliberating holding back from us to reveal later for dramartic effect. Or perhaps Moldova had planned a brilliant Augmented Reality-based staging concept that the Dutch technicians couldn’t get right. I suppose we’ll know the answer once the second rehearsals come around.

What do #YOU think of Stefania’s rehearsal? Will this dance be her last? Share your thoughts with us in the comments, on our forum HERE or on social media!