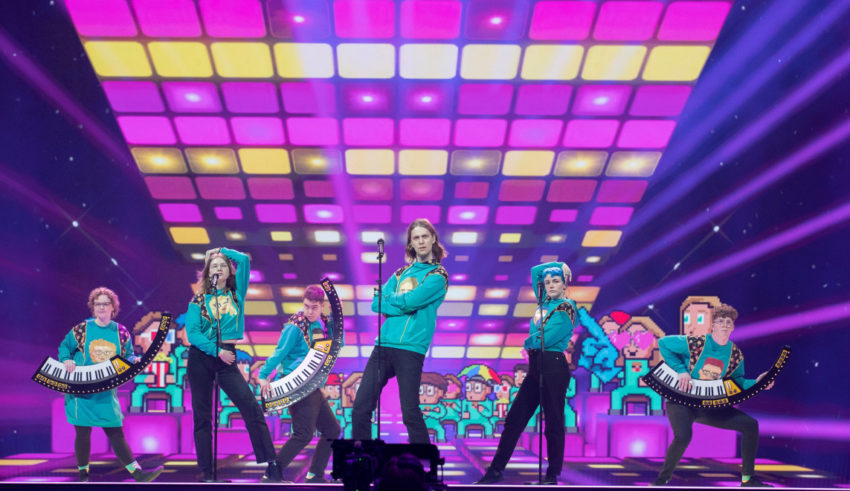 It feels like it has taken 10 years for Dadi Freyr to hit a Eurovision stage together with his Gagnamagnid gang. Time for a report on their first rehearsal!

Daði og Gagnamagnið were one of the big favourites to win last year. This year they have the massive weight on their shoulders to deliver something close to the standards of what they brought last year. After releasing their own little video game, they cashed in on this lovely marketing trick to add those characters to the staging all over the place. They float through space in the beginning, they are being seen dancing and they are put as a choir/audience on the see-through LED-screen. The entire performance is sprinkled with quirkiness, the moods are being set well and in the chorus we have everything turn into a gold/purple disco.

As for outfits, you can expect similar outfits to the ones used in the music video with shoulder highlight. The big exception is that it isn’t in red, but moreover in black with all of their pixelated faces sprinkled on top. The instruments have had a little update too, from their cardboard, custom made instruments to circular shaped key-tars. They at some point form a circle in the middle of the stage as a moment with lights on them.

Iceland nailed the staging in my opinion. Quirkiness and humor is often difficult to pull off well, but they somehow found a perfect balance of it in this staging. A lot is happening, but it isn’t overwhelming. It is very lighthearted and heartwarming and it brought a massive smile on my face.

What do #YOU think of Iceland’s rehearsal? Did they up the game with what they brought to Rotterdam? Share your thoughts with us in the comments, on our forum HERE or on social media!

Austria: The lights shine on Vincent Bueno for his first rehearsal!

Rotterdam, 09 May 2021 Vincent Bueno arrived in Rotterdam for his first rehearsal! Will we…