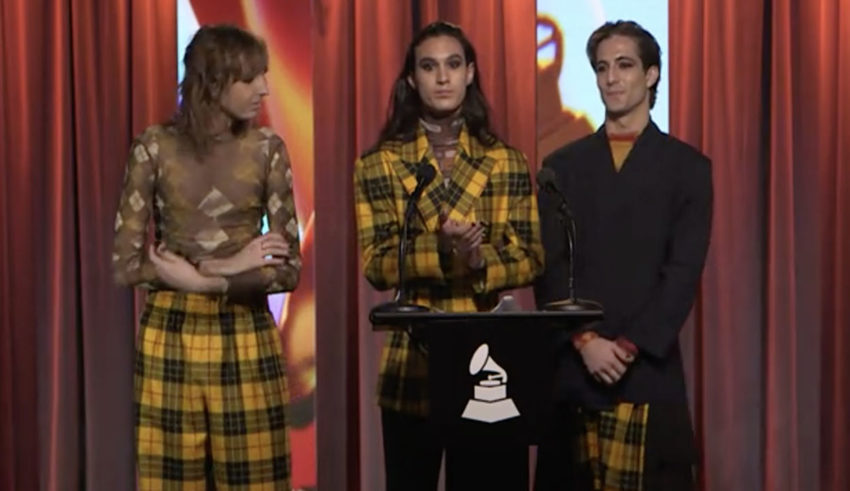 Måneskin continued their meteoric rise to global recognition with the band being invited to reveal nominations for the Grammy Awards in Los Angeles.

Though notably missing bassist Victoria de Angelis, the remaining trio of Damiano David, Thomas Raggi and Ethan Torchio took turns revealing a slew of nominees for the 64th Annual Grammy Awards, due to be held in January 2022.

Sadly, the Italian rockstars weren’t given a nod of their own in any categories in this year’s awards, but given their stratospheric rise since their Eurovision triumph in Rotterdam six months ago, perhaps we don’t have to wait too long to see the band get this ultimate recognition. At least, the awards’ official website featured the group’s rise in Europe and the USA in an incredible 2021 for the Roman quartet.

#YOU can watch Damiano, Thomas and Ethan of reveal the classical nominees in the below Twitter post from their fanclub;

🎥 | Måneskin did an amazing job presenting the nominations for next year’s Grammy Awards at the Grammy Museum in Los Angeles. 💫

In recent weeks, Måneskin have taken to the limelight Stateside, propelled by the success of their cover of Frankie Valli’s “Beggin'” from The X Factor in 2017. The band performed on the Jimmy Fallon show and supported The Rolling Stones in Las Vegas. In the interim, the band also returned to Europe to perform at the MTV EMAs in Budapest last week, winning Best Rock.

Would #YOU like to see Måneskin continue to grow their audience in the United States? Should Måneskin have been considered for a Grammy nomination? Share your thoughts with us on our forum HERE or join the discussion below and on social media!