After a wonderful show, Lissandro from France was crowned the winner at the Junior Eurovision Song Contest 2022 in Yerevan, Armenia with his song Oh Maman! He received a grand total of 203 points from the Jury and the Televote.

The show was held on Sunday 11 December in Yerevan Armenia, at the Karen Demirchyan Sports and Concerts Complex. 16 countries were competing for the win. The running order of the night:

The show was hosted by Iveta Mukuchyan (ESC2016), Garik Papoyan, Karina Ignatyan (JESC2019) and Robin The Robot. Next to the 16 acts, we also had reigning champ Maléna, 11 former Junior Eurovision winners & Tavush Diocese Children’s Choir and Eurovision hit sensation Rosa Linn performing as an interval act during the show.

After the amazing interval acts, it was time for the voting segment! It started with a wild jury vote, with twelve points spreading wide over several countries.  After the jury weighed in, it was France’s Lissandro leading the vote, with Mariam from Georgia and Nare from Armenia behind him!

However, France wasn’t the winner of the Televote! Freya from the United Kingdom received the most points from the people at home. Nevertheless, it wasn’t enough to beat France from the top position and Lissandro won the contest with 71 points from the televote and 132 from the jury, earning 203 points in total! In second place we see Nare from Armenia, who let the whole arena DANCE! and Mariam Bigvava from Georgia got the Bronze medal with her outstanding performance of “I Believe.”  This is France’s second win, after Valentina’s J’imagine from 2020.

Check out the full result below: 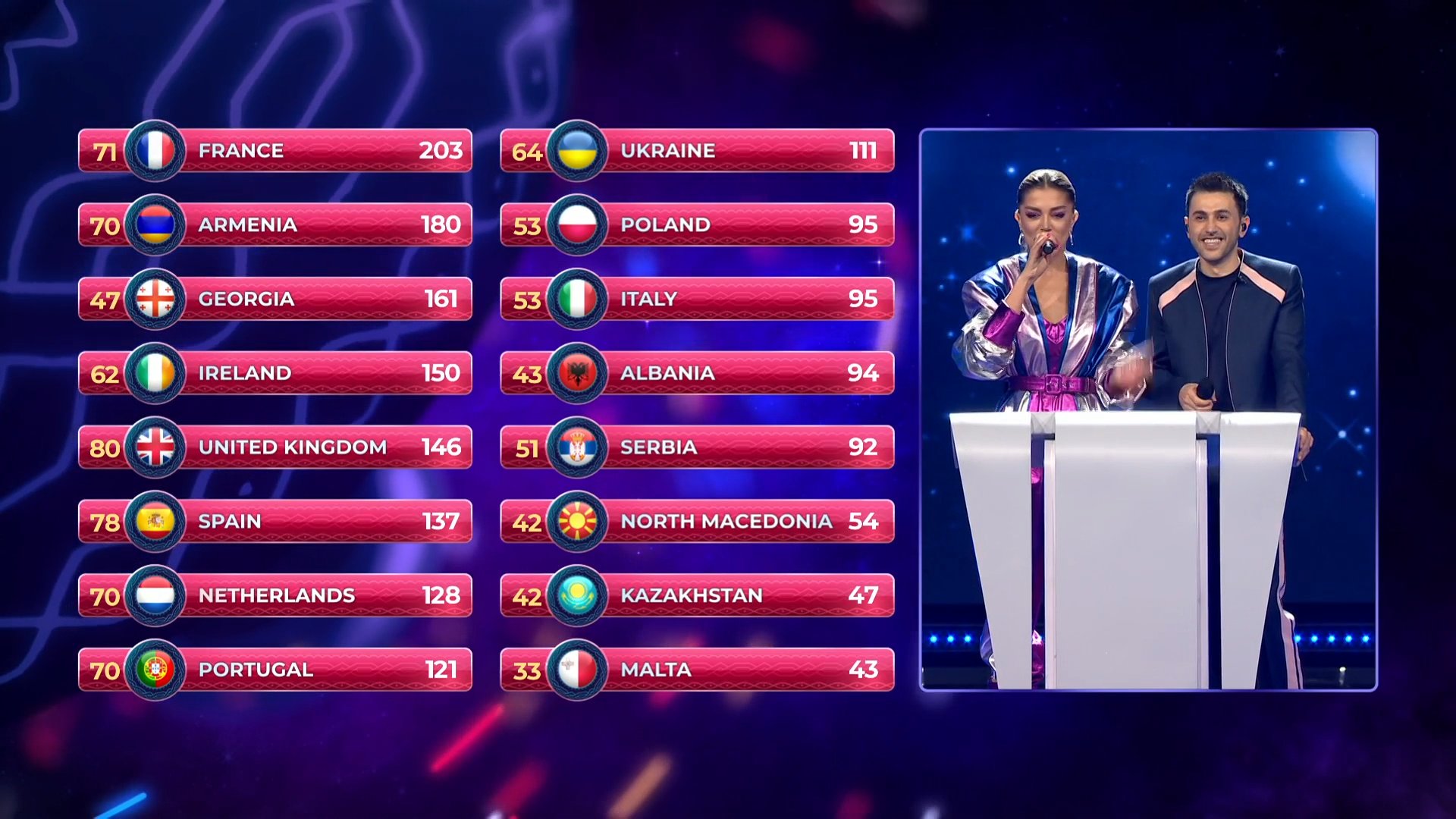 13 year old Lissandro Formica from the small village of Moselle in the East of France is well-known from his participation on season 7 of the French version of “The Voice Kids.” It was at the age of 5 that Lissandro fell in love with music. Thanks to his dad, he discovered Elvis Presley who became his idol. Which also earned him the nickname “Elvissandro”. For his blind audition, he decided to perform “Too Much” from Elvis Presley and ended up in team Jenifer. He made it to the Grand Final of the show, where he got eliminated by the winner of season 7 Rébecca Sayaque.

He represented France at Junior Eurovision Song Contest with the song Oh Maman! The song is co-written by Frédéric Château, who also writes for Patricia Kaas, Florent Pagny and M Pokora and Barbara Pravi. We all know her for ending in 2nd place at Eurovision 2021 in Rotterdam with her song “Voila,” but it’s also the third time that she wrote a song for Junior Eurovision (Bim Bam Toi and J’imagine) Oh Maman! was written especially for Lissandro with this unmistakable reference in mind.

Oh Maman! is all about living one’s dream of standing on stage and rocking out, and Lissandro hopes to keep singing, dancing, and acting. When he heard the demo for the first time, his first thought was ‘how does the songwriter know me so well?”

Are #YOU happy with the winner? Did #YOU have a favorite performance tonight? Let us know which one! Sound off in the comments below, in our forum, or on social media @ESCUnited.

Happy Junior Eurovision week! In just 6 days we will know who will be the successor of Mal…

Enter your email address below so you don't miss out on the latest Eurovision News!