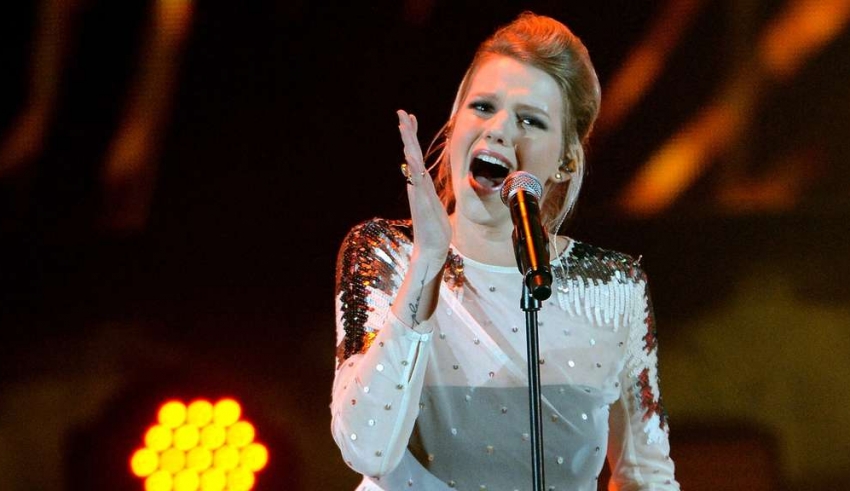 Germany have decided – Levina will fly the black, red and gold in Kiev after winning the national selection Unser Song 2017!

The singer progressed to the final stage of the competition which saw her go head-to-head with Axel Faige, following Germany’s eliminations of Yosefin Buohler, Felicia Lu Kürbiß and Helene Nissen.

With Levina and Faige both performing the two songs in line to represent Germany at the contest, “Wildfire” and “Perfect Life”, Levina’s performances were convincing enough for the public to vote her alone into the final round.

After one final vote, the German public have also overwhelmingly decided that Levina would perform “Perfect Life” in the final of the contest in Kiev!

David Popescu’s review of the show:

Guten Abend aus Deutschland! – The stereotype about Germans not being funny, let’s forget about that, cause they gave us a wonderful show!

As confusing it was, then what matter is, that we have a winner after 4 rounds of voting, the Germans sure gave us a interesting format of a national final this season.

Welcoming us, was our infamous host of the show, Barbara Schöneberger, she also hosted the German national final last year, so we were in safe hands.

After a fast introduction, then of course we had to see who were in our 3-man jury for tonight’s show. A fast note, the jury had no influence in any outcomes of the 4 Rounds of voting. The jury consisted of Tim Bendzko, winner of Bundesvision Song Contest 2011, Florian Silbereisen who is  a singer and Television presenter, and finally Lena, who won ESC 2010, and represented Germany on home soil in 2011.

The jury only had to comment on each performance of all the participants, helping the viewers for the possible outcome.

Finally the part we had waited for, and that was the contestants to sing and fight with their voices, for the rights to represent Germany in Ukraine.

The 5 selected singers, here gave a cover performance of a song by their own choice, the German public would then vote for the 3 best cover performances. Of course, none of the songs performed in this round, was Eurovision contender songs.

After some positive words for all of tonight’s performers, the German viewers had to vote, for the 3 artists that should move on to the next round.

After the vote had concluded, it was revealed that the following had qualified for Round 2:

Round 2, here we go, after having the 3 names that qualified to this round, then it was time for the 3 remaining artists to return on stage, so they all could give their version of the song “Wildfire”.

You could clearly hear the difference in style, that was performed by each contestant, and in this round, the public had to vote for the 2 contestants, that had the best performance of the song “Wildfire”.

The 2 performers moving on to the next round was:

Round 3 now, in this round, the 2 remaining artist would perform the second possibly Eurovision candidate song, this time being the song “Perfect Life”.

Meaning we had the following possibilities for Round 4:

For the 3rd time of tonight, the German public had to vote, and here the last possibility was selected, which means that Levina was selected as the winner, before the last round.

Final Round, alright, so at this point, since the public had voted for both of Levina’s performances, that puts her as the only remaining artist of the competition, therefor, she is the winner. However, we still need to figure out, which song will she sing in Kyiv.

In this round, she got to perform both songs once again, which were the following:

Before ending this marvelous show, then we were promised some guest performances, from 3 previous winners, and we finally got what we were promised, Ruslana, Nicole & Conchita Wurst coming together, to perform the songs “Euphoria”, “Merci, Chérie” & “Satelite”, indeed a real #CelebrateDiversity moment

This was the last time, the public had to vote tonight, and the winning song, that was selected for Levina was… “Perfect Life”

After 3 Rounds, we had our winner, which is Levina, and after 1 more round, we got the song as well, which is gonna be “Perfect Life”

Germany finished last in the Grand Final, the last 2 years, can Levina change this in Kyiv?

Have Germany made the right choice? What do #YOU think? Share your thoughts below or join the discussion on our forum!