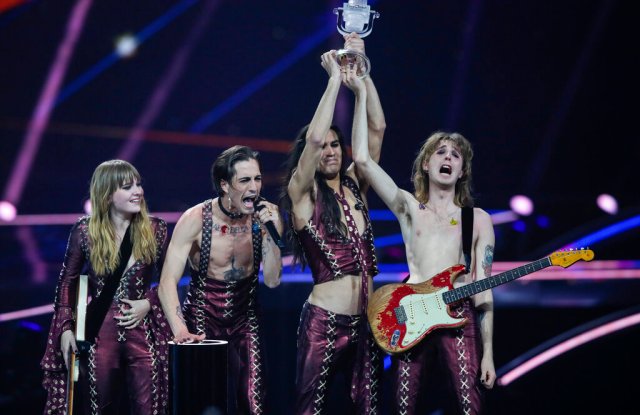 Maneskin from Italy receive the trophy after winning the Grand Final of the Eurovision Song Contest at Ahoy arena in Rotterdam, Netherlands, Saturday, May 22, 2021. (AP Photo/Peter Dejong)

The competition will be heading to Italian soil for the first time since 1991 after the triumph of Roman rock band Måneskin in the 2021 contest, and the head of delegation Simona Martorelli has already confirmed that a bidding process will be opened for cities interested in hosting the competition.

Taking to Twitter after last night’s victory, a number of officials from these four cities expressed their hopes that Eurovision 2022 would be celebrated within their community; Milan’s councillor for urban planning Pierfrancesco Maran with the backing of mayor Beppe Sala saying “let’s hope the next edition is in Milan!”.

City councillor for culture and sport for Bologna, Matteo Lepore, also expressed the city’s wish to host the contest, and Pesaro mayor Matteo Ricci posted on Twitter “We are officially applying to host at the Vitrifrigo Arena, one of the largest in the country and one of the most beautiful. Pesaro is the UNESCO Creative City of Music. Who better than us to host the great musical event?”

Further, the mayor of Turin in northern Italy, Chiara Appendino, stated “We, waiting for this announcement, are starting today to work on the Turin candidacy!”

We are sure over the coming weeks that more and more bids for Italy’s hosting of Eurovision 2022 will come to light, and we will endeavour to bring #YOU all of the latest news as we move from Rotterdam to the Italian hosting!

Where do #YOU want to see Eurovision 2022 being hosted? Share your thoughts with us on our forum HERE or join the discussion below and on social media!