Home 2021 Croatia: Albina takes you dancing in a lasershow during rehearsals! 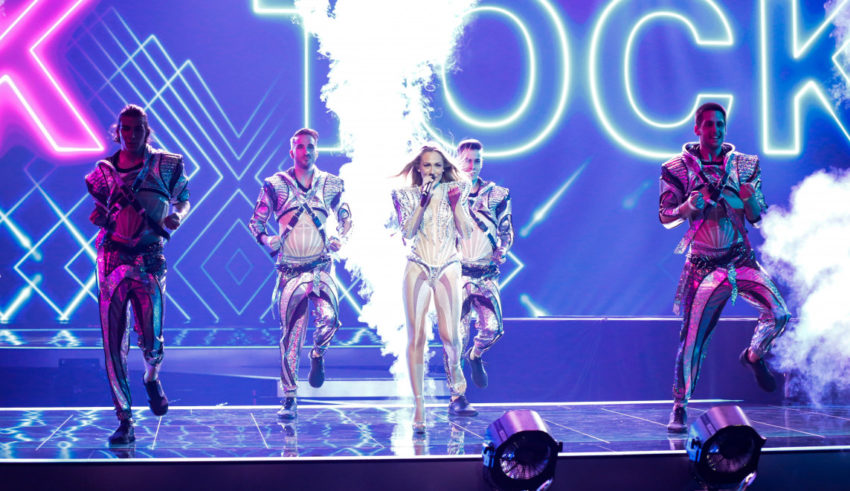 Time is tick-tockin’ by in the AHOY Arena, and it’s time to discuss the details behind the third entry of the day: “Tick tock” by Croatian singer Albina!

The Croatian staging concept is a very slick one. Albina is wearing a nude-coloured pantsuit encrusted with crystals (similar to Elena’s outfit, except her crystals are located around the shoulders), and uses laser lights to create a cool disco vibe. Beams of cyan and magenta lights flash behind all over the stage as she flips her hair with gusto.

Albina’s act is an active one: she starts off by herself, flanked by a powerful backdrop, and her dancers are “beamed” in before the first chorus in a cool visual effect. In the middle of the performance she went for an Iveta-effect (Armenia 2016), which was met with rapturous applause from the Press Centre. You get the impression she really enjoys the performance.

Vocally, her delivery is a little bit shaky however. She starts off well, but misses the high note near the end. Is she saving her voice for the more crucial rehearsals later this week?

Overall, Croatia have put together a very cool-looking entry that’s going to be well-received by expert juries. The big obstacle going ahead will be pulling the televoters aboard as well.

What do #YOU think of Albina’s rehearsal? Did you get lost in her playzone? Share your thoughts with us in the comments, on our forum HERE or on social media!