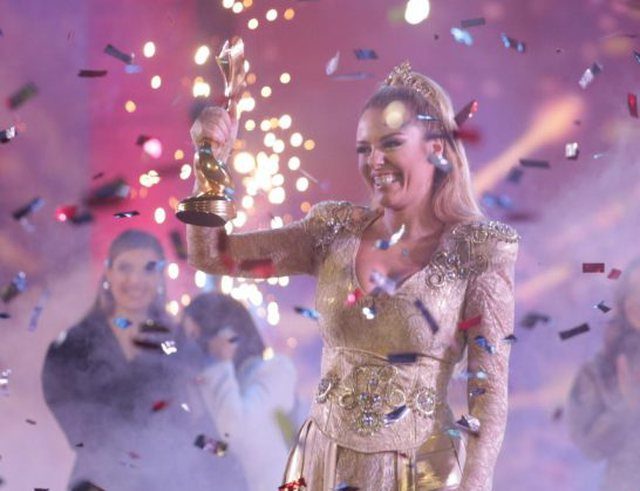 The opinions expressed in this article are those of members of our forum, and do not necessarily represent the views of ESC United as a whole or its staff.

On Wednesday, Albania became the first country to show their hand for Eurovision 2021, as Anxhela Peristeri emerged triumphant in Festivali i Këngës 59 to be selected as the Albanian hopeful for Rotterdam. Her entry “Karma” won out with the voting jurors, beating Sardi Strugaj and Festina Mejzini to the trophy. But how did our forum react to her victory in the Albanian selection?

Here’s a selection of reactions from our forum members in the immediate aftermath of Anxhela’s victory, and some further thoughts on the song Albania chose for Eurovision 2021…

“Anxhela. The rumour was true. Welp, a safe choice but I certainly don’t mind her.” – AlekS

“This might be the first time that I’m actually hoping Albania will revamp their song lol. It’s fine but it’s way too noisy and feels messy and directionless. Performance is good though.” – Kaz

“I’m happy my 2nd place won, it’s the kind of ethnic ballad I really love with lots of drama. I also think this will be even better on ESC stage with better sound quality and so on… To me, it does sound like an 18th place in the final, but let’s see. Good luck Anxhela!” – NikolaiMoller

“Slightly better than Shaj, miles better than Fall From the Sky, nowhere near Eugent nor Jonida. 6 points for now, could grow on me unless they translate it.” – HayashiM

“Not my cup of tea, but I’m very excited to see the transformation of this song!” – r3gg13

“Karma winning is alright. It’s not as good for me as some of Albania’s more recent picks but it’s solid, and something to work with. It’s screaming mid 00s Eurovision which isn’t a bad thing at all (at least for most of us). Inis needs to come back with a more interesting song as what she entered felt like a big waste of her talents this year.” – RainyWoods

“Um…this is like fine lol. I don’t think this is a bad entry, just very…messy. I think the pieces are there for something good, but they aren’t coming together at the moment. Granted Era would’ve been the only person I would’ve been particularly happy to see win. We’ll see what the future holds for Anxhela!” – LontraCanadensis

“Annual screaming lady confirmed. Can this 2020 year be just over?” – blue00eyes

“The song starts amazing, but unfortunately can´t keep it to the end. Still a nice one, I hope, they stay in Albanian.” – CPV4931

“It’s just there. Putting aside all the drama it’s not annoying and not a skippable song but no different than other Albanian entries.” – Granger699

“It’s somehow both too experimental and too conservative…” – Fluke

“Oh. That is my biggest disappointment from Albania since 2014. it‘s their first entry that I don’t instantly like although it is not as bland as “Fairytale”, it is not catchy neither.” – Ezio

What do #YOU think of Albania’s entry for Eurovision 2021? Share your thoughts with us on our forum HERE or join the discussion below and on social media!