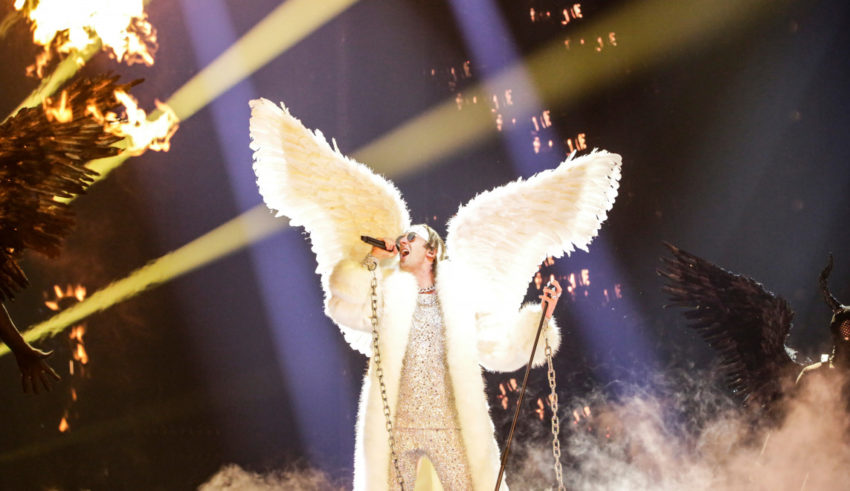 With a CV that already has a multi-million selling international hit, three number one singles in his native Norway and a career trajectory on the right path, TIX is a star on the rise – can Eurovision propel him even further?

With a strong songwriting profile and a huge following in his home country, TIX could well become one of the breakout stars of Eurovision 2021 if he plays his cards right!

Andreas Andresen Haukeland, to give him his real name, was born on 12th April 1993 in Bærum. His most well-known trait in the public eye is his battle with Tourette syndrome, a condition where he suffers from involuntary movements and twitches called tics. While Andreas was growing up, he was unfortunately bullied and treated differently for his condition and was called “tics” by the other children, a nickname that Andreas would later make his own and take ownership of.

His trademark appearance, consisting of sunglasses and big, oversized coats, is used by Andreas to cover for his tics while performing or appearing in public. In an interview with “Lindmo” earlier this year, he said that it was not his intention to make a character while performing but that “at some point in my upbringing, TIX and Andreas became two different people.”

In 2015, he broke through to the public eye with his song “Sjeiken”, which became a big hit with the ‘russ’, a Norwegian tradition of partying amongst high school graduates. An unlikely Eurovision connection stems from 2017, where he produced Flo Rida’s “Game Time”, and in 2018 he co-wrote “Sweet but Psycho” for Ava Max.

The song went on to become an enormous international hit, charting at number one in the charts of 22 countries, including TIX’s native Norway, and went multiple times platinum in many countries across the globe. This cemented TIX’s reputation as an established songwriter.

He released his debut album in 2016, “Dømt og berømt”, which went to number two in the Norwegian charts. He released a string of successful Norwegian singles, each title suffixed with the year of release, and grew his reputation in Norway.

It was in 2019 that things really took off for TIX; “Jeg vil ikke leve” went to number one in the charts, followed by four more singles all placing in the top 20. TIX began 2020 with two more chart toppers, “Kaller på deg” and the lockdown-inspired “Karantene”. A Swedish version was also recorded with Melodifestivalen alumni Samir & Viktor.

TIX is also known in Norway as a strong mental health awareness advocate, having openly discussed his experiences with Tourette syndrome, as well as feelings of loneliness and suicidal thoughts with the media. “I stand on the stage, entertain a couple of thousand people, and when I leave the stage I am alone again. I travel alone, come home to an empty house” he told “Lindmo” in 2021.

His openness combined with his strong music catalogue has seen TIX become one of Norway’s most loved artists in recent years with a high ceiling.

How did TIX get to Rotterdam?

Norway’s national broadcaster NRK once again elected to hold Melodi Grand Prix to decide the country’s entrant for Eurovision, with the 2020 winner Ulrikke electing not to take part in the competition this year. The door was left open for a new entrant to be selected to fly to Rotterdam for Norway, and a mammoth selection with five semi-finals, a second chance round and a final was devised.

TIX was chosen as one of the pre-qualified artists to the final on 20th February, alongside KEiiNO, Stavangerkameratene, Kaja Rode, Atle Pettersen and Rein Alexander. TIX performed his entry “Ut av mørket” in the first semi-final alongside KEiiNO’s performance of “Monument”. The two entries would become intertwined in the story of Melodi Grand Prix 2021.

After the pre-qualified entries were joined by five semi-final winners and a second chance wildcard, the twelve songs were performed again in the final from Fornebu. TIX qualified to the gold final alongside Blåsemafian ft. Hazel, KEiiNO and Jorn. In the second round of voting, TIX and KEiiNO made it to the final “gold duel” to perform again.

With the two songs going head to head, and in what many Eurovision fans saw as an upset, TIX comfortably won every televote except North Norway to win Melodi Grand Prix and be chosen as the Norwegian representative in Rotterdam, with the English version of his entry “Fallen Angel”.

How has TIX been preparing for Eurovision since selection?

It was announced in February that TIX had been awarded the Årets Spellemann award for 2020, an equivalent for “Artist of the Year” in Norway’s version of the Grammy Awards. Following his victory in Melodi Grand Prix, TIX went about preparing for Eurovision behind the scenes.

On April 5th, a mini documentary about TIX and his participation in Eurovision 2021 was broadcast on NRK.

In mid April, it was confirmed that TIX would be filming a music video for his entry, to replace the national final performance that we have become accustomed to. The long-awaited official video for “Fallen Angel” was released on May 4th, with the video serving as a short autobiographical story of how TIX’s character came to be, showing a young TIX being bullied at school before taking ownership of the nickname and becoming the stronger person we are all familiar with today.

The Norwegian delegation arrived in Rotterdam on May 8th, ahead of their rehearsals in the Ahoy Arena, Rotterdam. Just yesterday, part one of a vlog series about TIX’s participation in Eurovision was posted to his Instagram page.

Norway’s TIX will perform “Fallen Angel” in the first semi-final of Eurovision 2021 on May 18th, performing ninth on the night.

What do #YOU think of Norway’s entry for 2021? Share your thoughts on this article in the comments below, on our forum HERE and on social media!