Home 2016 Marching on in the Sunlight: the brief Leeds United career of an Irish pop star and Eurovision entrant 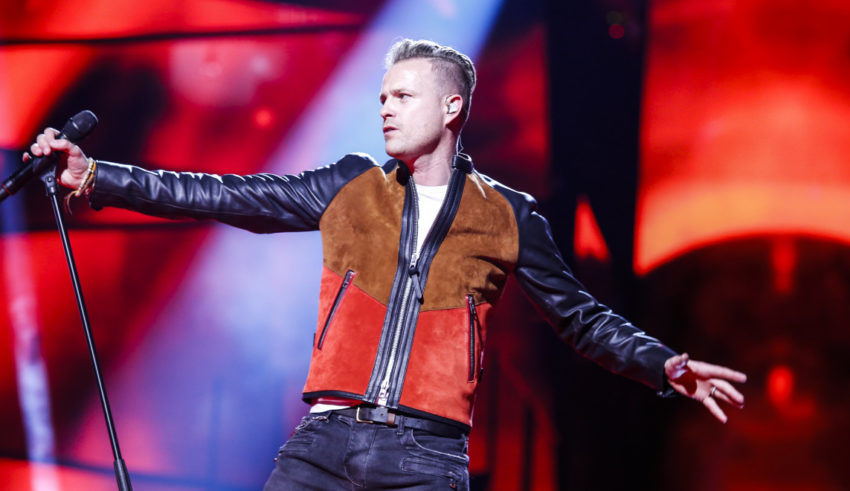 This past weekend, one of English soccer’s sleeping giants awoke from their slumber after 16 years and returned to the Premier League as winners of the English Championship, the second-tier league. For the 2020/21 season, Leeds United will be a Premier League team again, with many fans of opposing teams excited that their teams will be facing their old time pantomime villains and excited for the high energy attacking football of manager Marcelo Bielsa, an eccentric Argentinian who was shockingly hired on a wild gamble by Leeds owner Andrea Radrizzani two years ago.

Eurovision has its own sleeping giants. The United Kingdom used to be a force to be reckoned with, but is now a laughing stock. But a bigger sleeping giant, and one with as much of a drought as the United Kingdom, is Ireland. They won the contest a record seven times, but as with their neighbors across the Irish Sea, their record has been abysmal in the 2000s.

But today we’re going to look at an aspiring Irish goalkeeper who played for Leeds United’s successful youth team in the 1990s, yet went on to attain success in a very different realm: Nicky Byrne. You may recall Byrne as the Irish entrant for Eurovision 2016, but also and arguably more famously as a member of the popular boy band Westlife.

Finally Leeds United are back where they belong! #Premiership Massive congrats to all!! 👏🎉💫⚽️💙💛🔵🟡 @LUFC pic.twitter.com/O0qoPNcgpZ

Now this is not the first time ESC United has covered a Leeds United connection to Eurovision, and additionally, this article will not get into the extensive career Byrne had as part of Westlife, which is already well documented. This article will only deal with Byrne’s brief career as a player for a club that has made sporting headlines recently.

Born Nicholas Byrne, Jr. in Dublin, Ireland, on October 9, 1978, to Nicholas and Yvonne Byrne, the earliest indications were that Byrne was going to pursue a career as a soccer goalkeeper, joining his local team Home Farm F.C. at seven years of age. Byrne later transferred to St. Kevin’s Boys.

At the age of 13, Byrne met Georgina Ahern, who he’d eventually marry, in school at Pobailscoil Neasáin. Ahern’s father is former Irish Taoiseach (or Prime Minister or Irish head of government) Bertie Ahern from 1997 to 2008. At the time Byrne met Georgina, he was Irish Minister of Finance.

“I was only 13, but I liked Georgina the moment I saw her,” Byrne told Independent.ie. “She was a really classy girl with big blue eyes and was so friendly and polite. I could chat away to other girls, but I just froze around her.”

Additionally, Georgina’s sister is Cecilia Ahern, a famous Irish novelist who wrote P.S. I Love You, which was adapted into a film starring Gerard Butler and Hilary Swank.

While in school, Byrne began to be noticed for his goalkeeping. He was called up to the Irish national team Under-15 squad, and even won a European Young Footballer of the Year accolade. However, as he was about to enter Irish Sixth Year (approximately equivalent to the two years in American 11th to 12th grade), English giants Leeds United came calling.

By the mid-90s, Leeds United had a well-developed scouting network in Ireland, and historically the club has been home to Irish legends such as Johnny Giles. Additionally, the manager of the Irish national team at the time was legendary Leeds United defender Jack Charlton, part of the 1966 English World Cup winning squad, who himself managed Ireland to the 1990 and 1994 World Cups, a huge step up from Ireland’s typical form in international soccer. (Incidentally and sadly, Jack Charlton passed away last week at the age of 85.)

Byrne was one of many young Irish players to sign for Leeds United in the summer of 1995, including Alan Maybury and Stephen MacPhail. Ian Harte, who became a sensation for his rocket left foot that scored many stunning goals in Leeds United’s famous title challenging and European squad of the 1998 to 2002 vintage, was another Irish lad who joined in November 1995.

(1)
Leeds Utd fans out there, this is one great memory.
Here is the Teamsheet for the Premier league game V Southampton at The Dell 1995. I was named in squad & travelled. I was 16, just two months out of school😳
I took this off the wall in Elland Rd 😂🤷🏼‍♂️👉🏻 pic.twitter.com/DLTJSbneTt

Just two months after joining, Byrne was included in a first team squad to face Southampton in a Premier League on August 30, 1995.

“I was only 16 and a half years old, and he (Howard Wilkinson, Leeds manager at the time) said: ‘We will play Southampton next Thursday and I want you in the squad,” Byrne told Balls.Ie. “I just want to know if you can play, how do you feel?’ I remember I was very panicked, but I looked into the manager’s eyes and said: ‘I’m fine, I’m ready,’ even though from the bottom of my heart: `I AM NOT READY! ‘”

Byrne was assigned the number 36 for the year, and if you happen to have his shirt with name and squad number, he’d like you to get in touch.

“Sadly I never did get to keep my jersey at the end of the season,” Byrne said on Twitter. “I think the number on back would have read BYRNE 36. If anyone has it in their attic! You know where I am.”

He was sent off in a reserve game so was suspended for one game!

Byrne did not get to play in the 1 – 1 draw played at Southampton’s The Dell stadium, but it was an indicator of the esteem Wilkinson held Byrne, with Wilkinson a manager known for bringing up young Leeds youth team players and coaching them into world class players. Players include Irish right back Gary Kelly (Byrne was Kelly’s boot boy during his time at Leeds), Welsh midfielder Gary Speed, and David Batty, the latter two being in Wilkinson’s title winning team of the 1991/92 season.

And the 1996 youth team squad was a strong one as well, containing future internationals such as Harry Kewell, Jonathan Woodgate, Stephen MaPhail, and Paul Robinson.(Even though Kewell’s persona non grata in Leeds these days due to his agent’s shenanigans in engineering a cheap move from a free-falling Leeds to Liverpool and his later moving to Galatasaray, where two Leeds fans were murdered before a Uefa Cup game.)

This youth team ended up beating Crystal Palace in the 1997 FA Youth Cup Final, the second win in five years.

Sadly for Byrne, though, Leeds United’s manager George Graham, who replaced Howard Wilkinson, did not have the same faith in youth and not in Byrne in particular.

Additionally, Byrne was homesick and not settling in in England as well as hoped.

“You have to have a thick skin for football, take the banter and stand up for yourself in the dressing room,” Byrne told Independent.ie. “Things go too far and there are even fisticuffs at times, but it’s fun too. One Christmas, the youth team had to entertain the first team and the staff, so when it came to my turn, I got up and sang Last Christmas. Suddenly I felt a huge crack on the side of my face, because Andy Cousins had thrown an egg as a joke, but it hit me – hurt me, actually – and I was picking eggshell out of my ear for an hour afterwards. I just smiled along, because that’s football.”

The aforementioned Paul Robinson also emerged at the wrong time for Byrne, with the 6′ 6″ Robinson starting to emerge and earn more games than the 5′ 10″ Byrne.

“I still rate myself as a better goalkeeper than him, but the manager (George Graham) called me in and told me I wasn’t tall enough,” Byrne told Independent.ie. “They offered me on loan, but I didn’t fancy that.”

Robinson would end up in the Leeds United first team, but then earn a move to Tottenham once Leeds United were relegated from the Premier League in 2004, and ended up becoming an England national team regular. Byrne was released by Leeds United in 1997.

Byrne had trials at Scarborough and Cambridge United, but ended up returning to Ireland and playing with Shelbourne and Cobh Ramblers, keeping goal in 15 games for the latter.

However, it was at this time that Byrne stumbled on the career that would lead to superstardom. Byrne and his father toured Irish pubs doing Boyzone covers, and when Westlife manager Louis Walsh advertised for a new boy band called Westlife, Byrne auditioned and, well, you know the rest.

In summary, Leeds United’s return to the Premier League after 16 years of failure should be an inspiration for Irish Eurovision fans. The lesson is that sleeping giants eventually wake up, and as Leeds United did, we hope that Ireland can too, even if Byrne’s attempt to do so resulted in a Semi-Final elimination at Eurovision 2016.

How do #YOU rate Leeds United’s chances in the 2020/21 Premiership season? Or, more relevant to this site, how do #YOU feel about Ireland’s strategy for the past two decades and if, like Leeds United, they are a contest giant due to stage a comeback? Let us all know in the comments below, on social media, or in our forum.