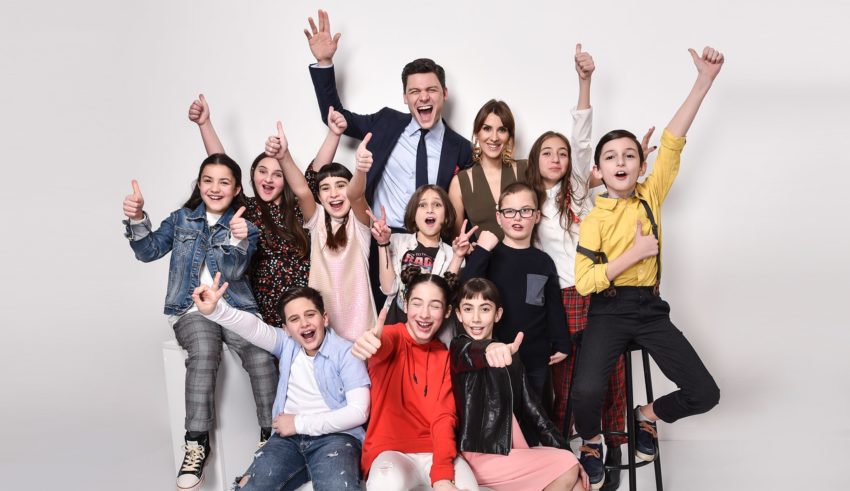 After the cancellation of Eurovision 2020 and the postponement of Eurovision Young Musicians 2020 due to COVID-19, quite a few eyes turned to the Junior Eurovision contest and its preparations in the ESC United camp.

Some ESC United writers are calling for a road trip to Poland in November 2020 as solace for not being able to attend the senior version in Rotterdam. If you readers out there are interested in ESC United giving the Junior version the full press court treatment like we do every year for the adult one, let us know.

And this year, they’ll make history again by being the first ever Junior Eurovision country to host the country twice in a row. Bear in mind this is a bigger deal for the Junior version than it is for the senior one as there is no obligation for the winner to host the contest (the rules merely state the winner has the right of first refusal).

Outgoing Head of the European Broadcasting Union’s (EBU) Live Events, Jon Ola Sand, said “We are delighted that TVP will be making history once again by hosting the Junior Eurovision Song Contest in 2020. Last year’s event in Gliwice set a new benchmark for the competition. The stunning production brought the Contest to a new level and we are so happy to be working with the talented team at TVP again this year.”

The host city for 2020 will be Krakow, with the 20,000 seater Tauron Arena the venue. At the time of press, work has stopped on the preparations of the Arena for Junior Eurovision 2020, but Krakow’s city councilors have specified that as long as coronavirus shelter in place restrictions last as long as the Polish government predicts (May 2020), they are confident the show will go on in November 2020.

TVP also currently lists Szansa na sukces as having a September 2020 final, which is, no surprise due to the ratings the show attracted in 2018 and 2019, again the national selection for the Polish entry.

Confirmed Participants other than the hosts

We will start this list off alphabetically, but coincidentally, the country that appears to be furthest along in selecting their representative for Junior Eurovision 2020.

Georgia will again use the Ranina show to select their entrant. The popular kids talent show was a ratings success in Georgia, so no surprise they will use it again even if their 2019 entrant Giorgi Rostiashvili finished 14th, Georgia’s lowest ever placement at Junior Eurovision. As with the adult version, the Georgian public doesn’t much care what Europe at large thinks, so Georgia remains supportive of young Giorgi and the process that selected him.

Ten kids have already been selected to participate in Ranina, and given some of them began appearing on audition videos on February 25, 2020 on Ranina’s Facebook page, and the official announcement came on March 2, 2020, it is likely most, if not all, of Ranina’s first round episodes were filmed before shelter in place orders came in to place for Georgia. The dates for the live Semi-Final show and Final show have yet to be announced.

Ranina will feature four “tours” that will test the contestants’ vocal performance, technique and stage presence, among other attributes. Each tour is themed, usually around a Georgian artist (Quintessence in 2019) or a Georgian traditional style (such as that of the Georgian polyphonic choir Shavnabada, several of whom were part of Ethno-Jazz band Iriao at Eurovision 2018 and backup performers for Oto Nemsadze at Eurovision 2019).

This year, David Aladashvili will replace David Evgenidze as head judge. Evgenidze also wrote Rostiashvili’s entry “We Need Love,” but it is unclear who will write the song this year. Aladashvili was also a judge on this season of Georgian Idol, which was won by Tornike Kipiani. Presenter and model Lika Evgenidze will host this year’s edition of Ranina.

The ten participants and ages are as follows:

Ireland will return to the 2020 entry, having announced a call for entrants on January 14, 2020. Based on the rules (see link in Tweet below), the national selection process will be identical to that of 2019’s, which was won by Anna Kearney, who came in 12th at Junior Eurovision 2019. It is also likely according to the national selection rules that the song will mostly be in Irish, even though Ireland qualifies to use English as a native language according to the EBU’s language rules (60% “native” language / 40% “other”).

Italian broadcaster Radiotelevisione italiana’s (RAI) Gulp channel confirmed via its Instagram account that Italy would compete at Junior Eurovision 2020. No further details were given about a national selection, making it likely Italy will again opt for an internal selection.

The Netherlands were the first to confirm participation at Junior Eurovision 2020 – they made the announcement during their national selection final for 2019 on September 28, 2019.

The Netherlands also confirmed that they will use a similar national selection, with the final again to be held towards the end of September 2020.

Russia announced their intention to participate at Junior Eurovision 2020 on April 2, 2020. Submissions for entries for singers aged 9 to 14 years old opened today (April 6, 2020), and will close on August 25, 2020. An auditions round will be held on September 7, 2020, with a jury selecting a number of individuals or groups to advance to a national selections final.

Russia also had a disappointing finish in 2019, coming in 13th with Denberel Oorzhak and Tatyana Mezhentseva’s duet “A Time for Us.” Oorzhak was taken to hospital in Gliwice-Silesia during the rehearsals, so Russia will be looking for better luck at the 2020 edition. Oorzhak recovered and was seen in fine form during the Russian Christmas and New Year Concert Season.

She stated that Spain was proud of Garcia’s finish, and that with Spain showing Junior Eurovision on a major channel (rather than relegated to a children’s TV channel or a niche language channel), they have a major leg up under the televoting rules of the Contest and remain confident of top finishes in years to come.

Right after Junior Eurovision 2019, the National Public Broadcasting Company of Ukraine (UA:PBC) announced they “hope to return to this hospitable country next year.”

No further details on the selection process (Ukraine held a national selection in 2019), but details should be forthcoming soon.

The United Kingdom departed Junior Eurovision in 2005 (despite a much better record than their adult counterparts recently with finishes in 3rd, 2nd, and 14th), and it was only until Wales opted to pick up the mantle and enter on behalf of part of the isles in 2018 and 2019.

Of course the question is, would the EBU be up for having two parts of the United Kingdom compete in the same contest at the same time? This happened at Eurovision Choir 2019, as Scotland debuted with Wales appearing both times in the contest’s short history.

BBC Alba, who broadcast and sponsored Scotland’s entry, with the media campaign behind the conductor Joy Dunlop (an established folk singer in her own right) quite slick as local newspapers across the country reporting on their local choir singer being handpicked by Dunlop to join the assembled choir, have not been shy about their intentions to join Junior Eurovision.

BBC Alba confirmed before Eurovision Choir 2019 that talks were ongoing with the EBU about a potential Junior Eurovision 2020 debut. No announcement yet, but we can hope that a culture that produces excellent folk and modern music as well as encourages its youth to pursue music is able to put together an entry this year.

The Eurofestivales blog is a great resource for Junior Eurovision, though usually when they ping an active EBU member about participation, they get a curt and brief “no” from a delegation member.

Earlier this year, the blog got a curious response from Iceland’s Head of Delegation Felix Bergsson when asked about Junior Eurovision: “I can say that RUV is constantly reviewing our participation in the Eurovision project and it is very likely that it could participate in any of these events in the future. It all depends on budgets and politics.”

Debuts by countries such as Wales and Kazakhstan in 2018 help expand the contest’s footprint, and a debut by a country like Iceland, whose support of the main Eurovision is fanatical (on the Grand Final broadcast the television ratings are usually in the 96% range), would be most welcome.

Like cod to the flame (or is it moths?), this North Atlantic island chain is a constant rumored entrant for Eurovision. Though a self-governing part of the Kingdom of Denmark, the rules for the adult contest prevent them from entry there (independence being a key requirement). However, with Denmark having last participated at Junior Eurovision in 2005 (with decent finishes of 5th, 5th and 4th), there’s nothing to prevent Faroe Islands from taking Denmark’s place as Wales did for the United Kingdom.

Germany remains the only Big Five nation to have not entered Junior Eurovision. However, prior to Junior Eurovision 2019, German broadcaster Norddeutscher Rundfunk (NDR) announced that they were sending a delegation to the contest to observe.

The delegation’s findings have not been made public yet, but for those looking for a well-supported nation to combat Poland from the Western side of Europe, Germany would be a good option. France and Spain made big splashes upon their return, and there’s no reason to doubt that Germany could do well upon their debut either.

A fan tweeted Belgium’s channel één (Channel One) asking about the contest, and they were tweeted back with “at the moment, no.”

A Junior Eurovision fan asked the Bulgarian Eurovision Twitter account if a return to Junior Eurovision was on the cards. Given the troubles with Bulgaria’s national broadcaster and them having to get entirely private sponsorship from iCard to fund their Eurovision 2020 entrant, it seemed unlikely a return to the junior version was in the offing. iCard Eurovision Bulgarian confirmed that “participation in other contests could be possible, but for the moment it’s not under discussion.”

At this stage our priority is the consolidation of our participation at Eurovision as we are already working on our plans for 2021. If circumstances allow, participation in other contests could be possible but for the moment it's not under discussion. https://t.co/kr7M90Cdfj

We will be sure to add more news as we hear it, but for the moment, the preparations for Junior Eurovision 2020 go on, and there will be surprises as we head into the summer and more countries confirm and we get a surprise returnee / debut (and unfortunately sometimes, a dropout).

What coverage and commentary would #YOU like to see about the Junior Eurovision contest? Let us know in the comments below, on social media, or in our forum.