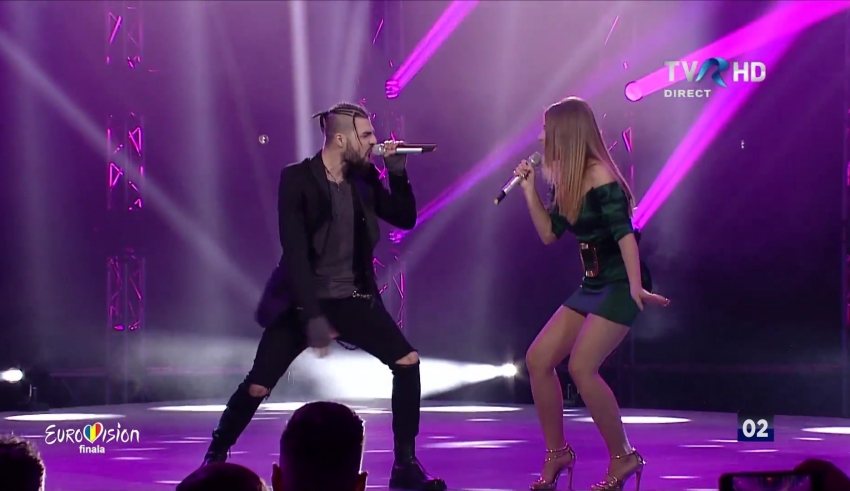 Romania is back at Eurovision!  After last year’s debacle, they are jumping right into the mix as a fan favorite with “Yodel It!” by Ilinca & Alex Florea.  It’s still early in the Eurovision mix, with many songs to be chosen and presented in the upcoming week; however, some are predicting Romania as a dark horse.  It would not be surprising, given that both Serbia and Ukraine took a year off due to controversial reasons only to come back and take home the trophy.

Yodeling is a strange art form that exists in many forms across the world.  The word itself, yodel, is thought to be derived from the Austro-Bavarian word, jodeln, which translates to “to utter the syllable jo” (pronounced as “yo” in current English phonetics).  In a nutshell, yodeling involves quick and sudden shifts in one’s vocal register of vowel sounds; the singer goes from low-pitched “chest voice” notes (“AH,” “OH,” “OO”) to high falsetto notes (“AY,” “EE”).  These dramatic leaps from low to high aid in the yodel’s loud and ear-piercing power. If you want to try yodeling yourself, check out http://www.wikihow.com/Yodel.

It is believed that yodeling was used as a form of communication among herders in the mountains. Given that herders had quite some distance from one another, the yodel’s power was put to good use. However, throughout history, there are recorded instances of the hate that yodeling has induced.  Scottish author Walter Scott called it, “a variation upon the tones of a jackass.” Mark Twain actually paid yodelers not to do so in his presence.  And despite the universal acclaim for The Sound of Music, which included the yodeling song, “The Lonely Goatherd,” there still remains great disdain for Gwen Stefani’s sample in the Pharrell-produced “Wind It Up!”

But in the context of Eurovision, yodeling has been seldom used, and with mixed results.  The first yodeler to grace the Eurovision stage appeared in 1957.  Bobbejaan Schoepen, the Belgian representative, was previously known for his 1948 single, “De Jodelende Fluiter” (“The Yodeling Whistler”). However, at Eurovision, there was no yodeling to be found (although some serious whistling skills at the start and end).  He would finish in 8th place.

It would take 20 years for the first use of yodeling to appear.  In 1977, “Swiss Lady” was the Swiss entry performed by the Pepe Lienhard Band and written by Peter Reber (i.e., the Peter from Peter, Sue, and Marc).  It finished 6th and was also a huge success in their homeland as well.

the story of a Cuban girl who fell in love with an Austrian boy, who impressed her with his yodeling skills.  The group’s yodeler, Sebastian Fuchsberger, was showing his A-game, but the voters were not impressed; they finished 21st in the semi-finals. As we all know, Austria would then take a one-year break from Eurovision (only to return in 2007, finish second-to-last in the semi-final, and take another break from 2008-2010). We can only be thankful that they returned in 2011 to bless us with the likes of Nadine Beiler, the Trackshittaz, Zoe, and of course, Conchita Wurst.

Since then, we have seen no more yodeling in Eurovision. However, many fans from within the past decade will make mention of Laura Omloop from Belgium at the Junior Eurovision Song Contest in 2009.  Her song, Zo Verliefd (Yodelo), was a two-and-a-half-minute ode to yodeling.  She finished 4th.

What future does Eurovision 2017 hold for Romania?  Will it provide the returning country the same success that earlier yodeling entries saw? Or will the juries and televoters agree with Walter Scott and Mark Twain, leaving it to crash and burn in the semis?  What are your thoughts?  Are you all about Ilinca and the yodel?  Or does it just remind you of Goofy falling off a cliff? (A final fun fact: the “Goofy Holler” actually was recorded by a yodeler for the 1941 Disney short “The Art of Skiing”)