Home 2022 Where will Eurovision 2022 be held? A guide to the cities bidding for the contest 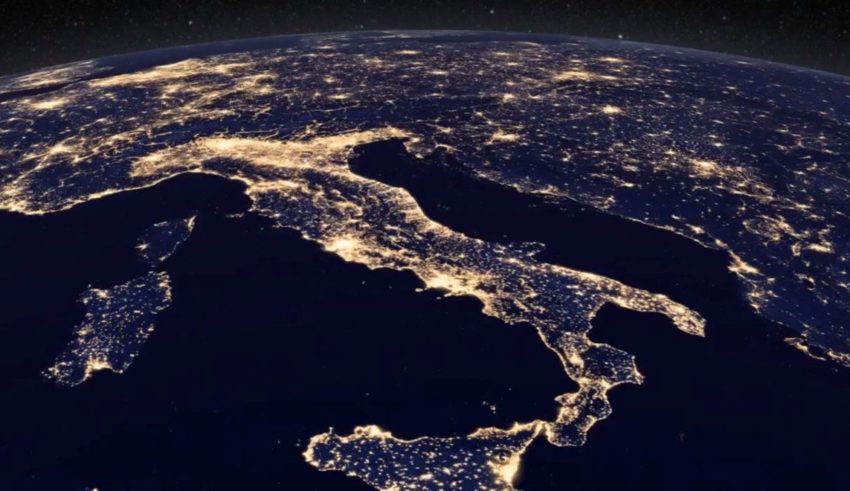 On Sunday, we reported on the fact that four cities in Italy had already thrown their hat into the ring to host the Eurovision Song Contest 2022, following Måneskin’s victory at the weekend. Now, it seems that many more cities are hoping to get into the action and secure the contest for their community.

Since it can be hard to keep track, here’s every city who has so far declared an interest in hosting the contest… 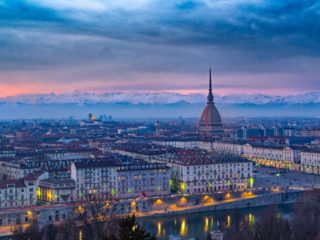 Many outlets are already calling Turin as the front-runner in the hosting race, with the northern city previously shortlisted by the Italian delegation in the event of their potential victory in the 2017 contest. The picturesque city in Piedmont lies close to the French and Swiss borders (a top three celebration beckons?) and is steeped in history, boasting historic architecture and home to some of Italy’s most iconic industries, including automotive companies. Turin also boasts particular sporting heritage as the host city of the 2006 Winter Olympics and the home of Italy’s most successful football club Juventus and well-decorated city rivals Torino.

Pala Alpitour is the venue of choice for Turin’s Eurovision bid, with the venue sitting adjacent to the Stadio Olimpico di Torino. Boasting a capacity of roughly 13,350 for end-stage concerts such as Eurovision, the venue is well supported by public transport and local hotel capacity. 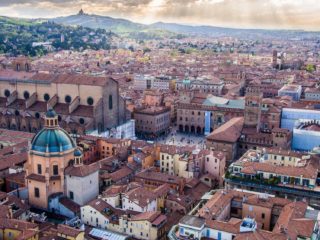 Located in the heart of Emilia-Romagna, one of Italy’s most culturally rich and economically developed regions, Bologna has long been known for its terracotta brick buildings, the ancient University of Bologna and its rich and varied culinary tradition and boasts one of the largest indoor arenas currently in the running to host the 2022 contest, with space for 20,000 spectators at concerts.

The Unipol Arena at the heart of the bid is in fact situated in the town of Casalecchio di Reno to the immediate west of Bologna, representing a 15 minute drive from the city centre. While the arena may not be as conveniently located as in some of the other candidate cities, the size of the venue, Bologna’s attraction as a host city and the fact the city boasts its own international airport will be the main selling points of the city’s bid for Eurovision. 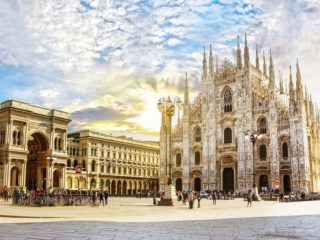 An international fashion, arts and culture centre and one of the most desirable cities for tourists to visit in the country, Milan is the second largest Italian city behind the capital and sits in a convenient location in the centre of Lombardy region.

The city’s venue, the Mediolanum Forum in Assago, is another arena that lies outside the city’s centre but boasts a 12,700 capacity for sports and has extensive experience in hosting music events and concerts since its opening in 1990. Milan is also a well-connected city with a large metro network, a large international airport (and a smaller airport in nearby Bergamo) and close connections to the cities of Bergamo, Brescia, Piacenza and Como as well as the first Eurovision host city Lugano in southern Switzerland, for those fans who wanted to do a little road-tripping of the region. 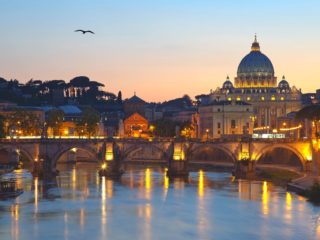 Certainly not a surprise, the Italian capital and centre of the Lazio region is a shoe-in for the hosting shortlist for its sheer size and draw to tourists, with many of Italy’s iconic landmarks such as the Colosseum, St. Peter’s Basilica and Trevi Fountain in the city’s limits. Visitors can also tick off another country from their list by paying a visit to the Vatican City!

The PalaLottomatica is the historic venue of Rome’s choice for the contest, having been around as long as the Eurovision Song Contest itself. With a capacity of 11,200 for basketball, there should be plenty of capacity for the contest and the city itself would certainly be a big draw for Eurovision fans and tourists, with plenty to keep them occupied during the Eurovision week (or fortnight!). 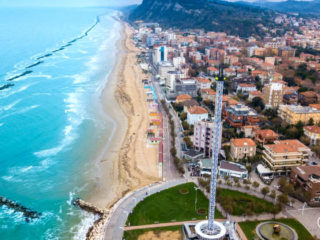 With labels like the “City of Music” and “Creative City” and in an idyllic location on the eastern Mediterranean coastline of the country, Pesaro is a left-field choice that could surprise in the ultimate reckoning for Eurovision 2022. The compact city would offer a convenient option for fans with less travel time between venues and Eurovision locations, while also offering the beach vibes that many would flock to Italy for!

The jewel in Pesaro’s Eurovision bid crown is the Vitifrigo Arena, one of Italy’s largest indoor venues boasting a capacity of 13,000 and home of the Rossini Opera Festival. The venue lies close to the E55 European route, which runs from Helsingborg in Sweden to Kalamáta in Greece, offering a strong transport link to the rest of Central Europe, with the city served by Rimini Airport to the north. 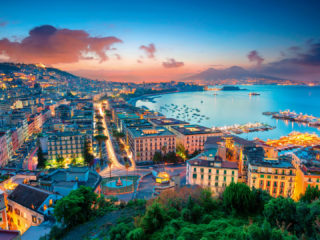 The largest city in the south of Italy and the third largest overall, Naples is one of the oldest inhabited cities in the world and has a vibrant history. The birthplace of pizza and spumone ice cream, Naples’ impact on cuisine, the arts and architecture is immeasurable.

Naples’ potential venue for the contest would be the 5,500 capacity basketball arena PalaBarbuto, in the south-west of the city. The venue’s smaller size and less convenient location may harm their bid, but the fact that Naples boasts an international airport within the city and extensive hotel capacity gives the Neapolitans a chance at Eurovision coming home. 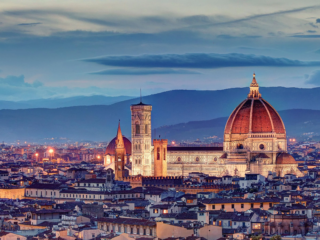 One of the most stunning cities in all of Italy and the jewel of Tuscany, Florence is renowned world-wide as the “birthplace of the Renaissance” and boasts the impressive Cattedrale di Santa Maria del Fiore and famous Ponte Vecchio bridge, and breathtaking views of the city skyline from Piazzale Michelangelo.

The Nelson Mandela Forum in the north-east of the city would act as the contest venue should the bid be successful, with a capacity of 7,500. Florence’s compact shape and access to Florence Airport are positives, as well as the city’s proximity to Pisa’s Gallileo Gallilei Airport and the opportunity to visit the world-famous Leaning Tower of Pisa. 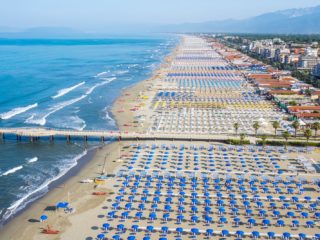 Often touted as the ideal host city in the event of a San Marino victory at the contest, the beach-front city lies just a half hour drive from Eurovision’s smallest country and is situated in some of the most beautiful surroundings in all of Italy.

The Rimini Fiera fair centre would act as the contest’s venue, with capacity for up to 10,000 people for certain events. Exhibition centres have played host to the contest in recent years, such as Kyiv’s 2017 venue, so this certainly can’t be ruled out as an option just yet, and Rimini’s location and connections to the rest of Europe make their bid a very viable one indeed! 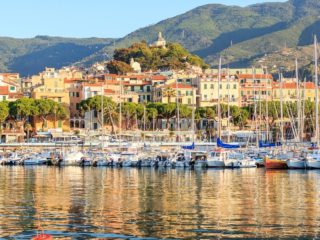 The romantic choice in this list is the city of Sanremo, situated on the Italian Riviera in the far west of the country. The Ligurian city is famed worldwide for its annual Sanremo Festival, the precursor to the Eurovision Song Contest and Italy’s current selection method for the competition – so it would be fitting if the contest returned home in 2022!

The Teatro Ariston would be the venue in the Sanremesi bid, having been the host venue of the festival since 1977. The theatre was originally selected as the Eurovision 1991 venue before the contest moved to Rome for security reasons. The theatre’s location at the heart of the city and its picturesque surroundings would make for a memorable Eurovision, although its small capacity (2,000) would make this an unlikely selection for RAI to make, given the hope for a larger venue as more fans make their return to the contest. 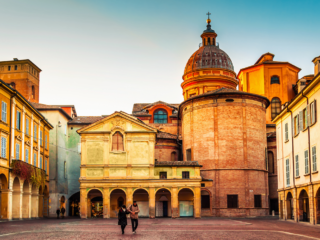 Perhaps a more unlikely choice, RAI could really raise eyebrows in 2022 by selecting the city’s 100,000 capacity open air arena as the venue for the competition.

Realistically, the bid is unlikely to gain the approval of the EBU (a roof would be a requirement, first of all) but the compact city would provide a stunning backdrop to the contest and certainly would be the most unforgettable venue in the contest’s history!

Where would #YOU like to see the Eurovision Song Contest 2022 held? Share your thoughts with us on our forum HERE or join the discussion below and on social media!