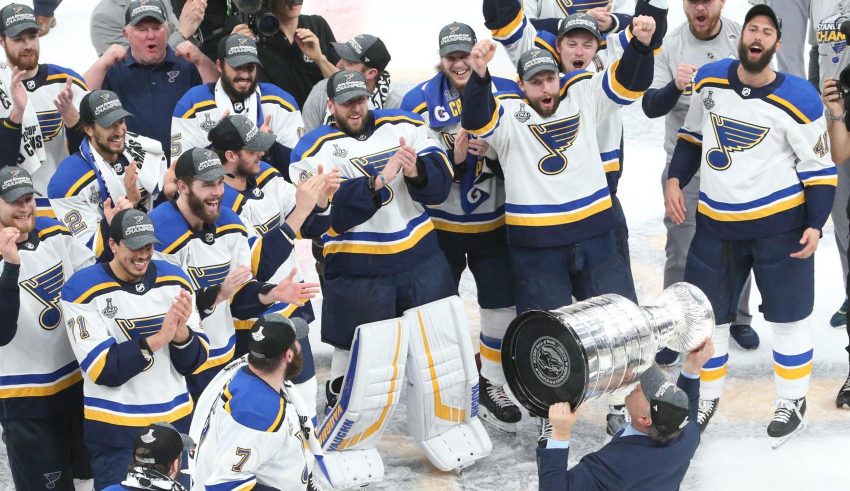 The most unlikely National Hockey League (NHL) team with the most unlikely victory anthem in the St. Louis Blues beat the Boston Bruins 4 – 1 this evening in the seventh game of the Stanley Cup Finals to take a 4 – 3 series victory at the TD Garden Arena in Boston.

And they earned their first ever Stanley Cup triumph in their 52 year history powered by the 1982 Laura Branigan hit “Gloria,” which several members of the team began using as a post-victory celebration song in January 2019 after a chance get-together at a bar in Philadelphia. Written by Umberto Tozzi and Giancarlo Bigazzi in 1979, “Gloria,” as covered by Branigan, was the fist-pumping anthem that St. Louis fans were familiar and again fell in love with that powered the team from the worst in their division to the winner of the NHL play-offs. Tozzi, as one half of Umberto & Raf, placed 3rd at Eurovision 1987 with “Gente di Mare.” Bigazzi was also a co-writer of that entry, widely considered one of the best Eurovision non-winners of all time.

In a sports story that you could almost call Rocky-esque, it is appropriate that the tradition of using “Gloria” as a post-victory song began at a bar called Jacks NYB in Philadelphia, Pennsylvania.

On an off day, watching the Chicago Bears and Philadelphia Eagles Wild Card National Football League (NFL) game on January 6, 2019, five Blues players who went to Jacks NYB noticed a local drunken goon losing his mind every time Branigan’s “Gloria” came on during an advertisement break and demanded the bar’s DJ play it at regular intervals.

You have to visit Philadelphia and see for yourself the magical transformative effect alcohol can have on the locals (as long as they’re not carrying batteries), but Blues’s players Alexander Steen, Joel Edmundson, Robert Bortuzzo, Jaden Schwartz and Robby Fabbri were amazed by the drunken local antics and wanted to import it to the Gateway to the West right there and then.

“We got together with some friends and watched the game with a bunch of Philly guys who grew up there,” Edmundson told stlouisblues.com. “They had a DJ in the bar and whenever there was a commercial break, they would crank the tunes and all these guys from Philly would get up and start dancing around. They played this song “Gloria” a couple of times, and this one guy looked at the DJ and said ‘keep playing “Gloria!,” so they kept playing it. Everyone would get up and start singing and dancing. We just sat back and watched it happen. Right there we decided we should play the song after our wins. We won the next game, we got a shutout, so we just kept on playing it.”

Now we have covered Laura Branigan and her Eurovision connection before, particularly with her song “Self Control,” which was performed by Raf (aka Raffaele Riefoli) of Umberto & Raf and also co-written by Bigazzi. The only reason the author (i.e. me) chose to write about that Branigan track at the time was because KEiiNO, whose “Spirit in the Sky” came in 6th at Eurovision 2019 (but first in the televote), borrowed visual elements from the William Friedkin directed video for Branigan’s “Self Control,” particularly the white masks that the “creatures of the night” wear.

“Gloria” as performed by Umberto Tozzi was a Top 10 hit in his native Italy, France, Austria, Switzerland, Belgium, South Africa, and West Germany. Tozzi’s original lyrics were about a girl named Gloria he met only in his dreams at night and an escape from his reality. Born on March 4, 1952 in Turin, Italy, Tozzi hit the heights of Italian music in his 20s after becoming renowned for his keyboard and guitar work, and then composing for a pre-Eurovision 1975 Wess and Dori Ghezzi. Tozzi broke out in 1977 as a solo artist with “Ti Amo,” (also covered by Branigan to commercial and critical success) and solidified his status as an up-and-coming pop talent with “Gloria” in 1979.

Branigan’s German manager Jack White brought the song to Branigan’s attention to be used on her debut album “Branigan,” and she knew right away that she would have a runaway hit on her hands.

“Originally, it was an Italian song, and it was a much softer love song that was a huge hit in Italy,” Branigan told InNews Weekly in 2003. “Still, my manager in Germany at the time brought it to me, but I thought it was too soft, so we rewrote it and gave it a really good American shove.”

Branigan and guitarist / lyricist Trevor Veitch changed the lyrics so the song was about a girl who is running ahead of herself in life, rather than a straight gender swap of the roles in the song, as originally planned (it was supposed to be called “Mario” before Branigan vetoed the idea and insisted the lyrics be completely rewritten). Additionally, White brought in Greg Mathieson, who played keyboards on Tozzi’s “Gloria,” to do the same on Branigan’s version.

“Gloria” was also a stratospheric success as charting singles from debut albums go. “Gloria” hit Number 2 on the Billboard Hot 100 in June 1982, only kept off the spot by bad luck of release dates (combating Lionel Ritchie in his prime and Toni Basil’s “Mickey”). “Gloria” broke the record for a female artist: the song remained in the Billboard Hot 100 for a staggering 36 weeks. “Gloria” was also nominated for Best Female Pop Vocal Performance at the 1983 Grammy Awards. As we’re talking Grammys, of course Branigan lost to someone else, and if you can recall winner Melissa Manchester’s “You Should Hear How She Talks to You” without using YouTube or Spotify I will call you a liar. (Manchester’s song is actually pretty good upon hearing it, but it lacks the memorability of “Gloria’s” main riff and Branigan’s powerful vocals in the chorus.) Eurovision 1974 alum Olivia Newton-John’s “Heart Attack” was also stiffed by the Academy that year.

Branigan later had a hit with “Self Control,” a Bigazzi and Steve Piccollo penned song with Raf. The song was released by both Branigan and Raf in the summer of 1984. Simultaneous releases of the same song by different artists was common in the 1950s and 1960s, but it was unusual in 1984, though neither version suffered as both were smash hits in Europe, though Branigan’s had an edge in all European countries except Italy and Raf’s version did not chart in the United States. Both have ardent defenders, and although both are in English and have the exact same lyrics, there are those who prefer Raf’s new wave synth-driven version to Branigan’s, which of course is dominated by Branigan’s fantastic vocal performance and the replacement of the main keyboard riff with an electric guitar riff. Spain’s representative for Eurovision 2009, Soraya Arnelas, had a club hit with a cover, which tries to build a bridge between Raf and Branigan’s versions. Thematically, her Eurovision entry, “La noche es para mi (the night is for me),” references “Self Control.”

Given their high profile from their own work and the popularity of their songs for Branigan, there was a lot of excitement when Italy returned to Eurovision in 1987 after a year out and announced that Umberto Tozzi and Raf would represent them in Belgium. It was a good year for Tozzi, as he had just won the February 1987 Sanremo Music Festival with Gianni Morandi and Enrico Ruggeri with “Si può dare di più.” But as was the fashion for Italy at the time, Italy’s Radiotelevisione italiana (RAI) internally selected Tozzi and Raf, with their song “Gente di mare” (“People of the Sea,” not “Sea People” as the British Broadcasting Corporation’s (BBC) commentator Terry Wogan somewhat inaccurately called it at Eurovision 1987, though props to him for slipping in a “Self Control” quip).

Composed with their favorite lyricist Bigazzi, Tozzi and Raf’s “Gente di mare” is a pleasant, soft ballad about the people of the sea – more the Meryl Streep in “Mamma Mia!” types than sailors, presumably – who leave behind the stress of the world and live a care free existence by the coast. It was popular in Europe at the time, too, charting in the Top Ten in Italy, Austria, Belgium, Sweden, and Switzerland. As a care free song to lift your spirits during the summer, what stood in their way of victory at Eurovision 1987?

The Second Coming of Johnny Logan and “Hold Me Now” ran away with victory, with what is regarded by many Eurovision fans as one of the best Eurovision winners of all time. From his opening slow swagger and opening notes, “Hold Me Now” had the hallmark of winner, even better than his 1980 winner “What’s Another Year.” Germany’s pop reggae feel good summer hit by Wind, “Laß die Sonne in dein Herz,” pipped Tozzi & Raf to second place, though Italy got 12 points from Germany, Spain, Ireland, Portugal, and Yugoslavia. Even though Germany got only two 12 points scores, the vast number of 10’s and 8’s relative to Italy was enough to snag second. Of note, Wind’s back-up singer and dancer was Robert Pilatus of Milli Vanilli fame / infamy.

“Gente di mare” is without a doubt one of Italy’s best entries, a beautiful ballad to play when you want to unwind. Had they not been up against the juggernaut of Johnny Logan, “Gente di mare” could have won any other year. To this day, “Gente di mare” remains many fans’ non-winning favorite. Tozzi and Raf continued recording and though Branigan did not manage to lift their songs to the top of the United States any more, both released work that charted into the Top Ten of European charts well into the 1990s.

And how does the Blues’s Stanley Cup triumph add to the legacy of Branigan and “Gloria?” From being 15 – 18 (that’s 15 wins and 18 losses) at the beginning of the season to winners of the Stanley Cup at the end of it is quite the turnaround, and Branigan’s manager is appreciative of the attention to Branigan. Unfortunately Branigan died of a brain aneurysm during her sleep in 2004, just as she was over a run of bad fortune and ready to make a comeback, but her management said that Branigan would have loved her song being used as a sports team anthem.

Sadly, a lot of new fans of “Gloria” are unaware of Branigan’s passing and keep posting on her Facebook page requests that she perform at a St. Louis Blues game.

“Absolutely LOVE this, and it’s getting a LOT of press!” said Branigan’s manager Kathy Keto Golik on Laura Branigan’s Facebook page. “Bittersweet part if that some fans and such are unaware of Laura’s passing and have been requesting that she come sing ‘Gloria’ at one of their games or the playoffs… so wish she were her for that, as I know she’d be thrilled.”

And with goals by Ryan O’Reilly, Alex Pietrangelo, Brayden Schenn, and Zach Sanford, the Blues enter the NHL history books. With Jordan Binnington being imperious in goal preventing 32 shots from going in, and O’Reilly earning MVP status in the NHL post-season, perhaps Branigan and Tozzi should also be given plaques to recall their role in pumping up a group of also-rans into champions.

Do #YOU have a Eurovision song that could power your sports team to victory? Let us know in the comments below, social media, or in our forum.