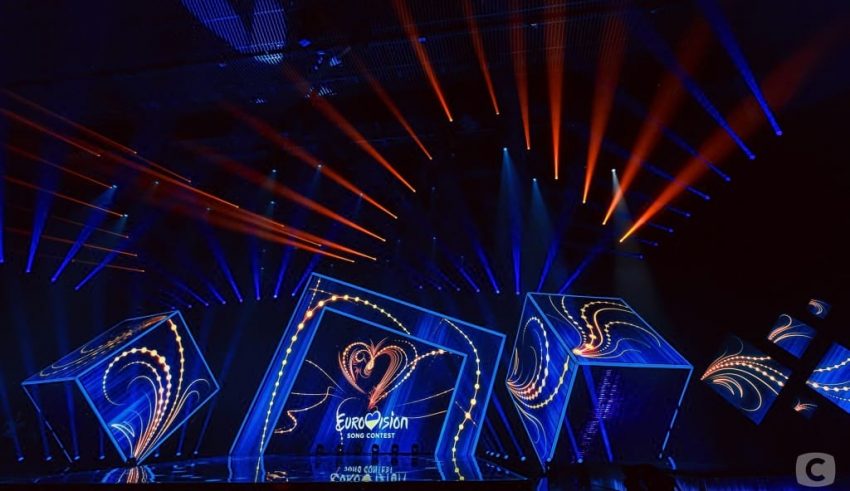 Ukraine’s national selection Vidbir begins for 2019 this weekend, as the collaboration between UA:PBC and the private channel STB continues its successful partnership. With an intriguing and alternative mix of songs in this year’s competition, there’s certainly a lot to sink our teeth into. So, what did our editors think of this weekend’s tracks?

James – 7 – “This has got to be a first: Satanic Swing Music. Well swing infused with a bit of punk. If this makes it to Tel Aviv, you’ll be able to spot Ukrainian fans from a mile away in their red painted bodies and devil horns. From my description of Satanic Swing Music it shouldn’t work, but it does. You’ll be dancing in the flames of Hell to this one.”

Sean – 6 – “This would really be a novel choice for Ukraine! This style of jazzy rock isn’t exactly common in Eurovision and would certainly be a stand out. Whether this is for the right or wrong reasons, well… the public will have to decide. Personally I think this isn’t an incredible entry but I enjoy it for the authentic performance it is.”

James – 4 – “A drab, repetitive indie rocker with no real hook. Sounds like a Ukrainian Philipp Kirkorov stripped of all his finery being forced to be lead singer of a Manchester indie band. It’s forgettable, unfortunately. Letay’s YouTube video description for this song states that “Life is fleeting.” I wish the song echoed that sentiment of appreciating the moment.”

Sean – 8 – “I’m not sure if groovy is the right word for Letay’s entry, but I’m enjoying the vibe this creates. It’s a song I can really sway along to, and with a really impassioned performance I’d like to see this reach the Vidbir final and challenge for the higher places. It’s an odd indie pop song in essence, and that’s right up my street.”

James – 4 – “Oh come on. If you’re going to name your song “Wow!,” you’d better have more than one wow moment, which is Vera’s singing at the bridge. And rhyming now and ow with wow is lazy, on top of the word salad that passes for the song’s lyrics. A serial contestant on Ukrainian TV, we know Vera can sing. But it’s a basic yet meandering funky number, with only one moment at the bridge giving Vera the opportunity to let her voice shine.”

Sean – 7 – “The first Vidbir semi-final gets off to a slower, more laid-back start, and Vera brings another jazzy entry to this selection. You almost get the impression during the bridge she wants to leap into a mad ad-lib improv session, but instead we get a pleasantly surprisingly key change. Surprised by how good this turned out to be!”

James – 1 – “Oh great, another techno band with a variation of hate or hatred in their name. Unlike Hatari’s ‘90s industrial, this is techno with traditional brass and accordion throughout. The vocalist is irritating, listing a series of things she hates (patriotism, sexism, democracy, Eurovision, her own voice, this song, etc.) in a whiny voice that gets old really fast. And as with Hatari, Tsesho dive into politics on a daily basis with their music and puppet theatre, and even did a TED talk on the subject. TED’s gone downhill over the years – don’t bring Eurovision down by bringing this unfun excuse of a song.”

Sean – 6 – “Whoa, this is mad! TseSho’s protest against the modern human condition takes on many forms over its three minute duration, and well… I think my final opinion would really hinge on the live performance, where this could be something exception or crash and burn. It’d be interesting to see a song with the lyric “I hate Eurovision”, at least!”

James – 3 – “A very minimalist electronica song with a droning vocalist. There is little variation here, and without understanding Ukrainian, I have to say this is a snooze. The YouTube commenters really like the lyrics and that the folklore presented is quite magical. That’s great and all, but the only people who could understand this won’t be able to vote for it! All us non-Ukrainians are left with is droning atop a beat going at the speed of dying elk. Yuko’s going to have to find a way to stage the folklore visually so us non-Ukrainians get it.”

Sean – 7 – “This is an alternative selection for sure! In Yuko’s “Galyna Guliala” we have another seemingly low-budget production (and I don’t mean that in a negative way). From a British observer, this comes across as a dark, brooding, minimalistic piece of Ukrainian angst condensed in a digital bedroom pop package. What an intriguing selection!”

James – 4 – “The mumbling singer is drowned out by the loud club banger of a track. Maruv may be a great singer, but this whispering and mumbling just doesn’t cut it I’m afraid, with the only audible words being “Come to me!” over and over again and the verses ending in “bang!”. It’s like listening to a girl who’s had one too many Xanax at a nightclub.”

Sean – 9 – “I was very excited to hear that Maruv had been added to Vidbir, and especially so when it seemed like the incredible “For You” would be her entry. Instead, we have “Siren Song”, with a similar mixture of brassy percussion, traditional folk elements, seductive vocals and dark electro. This song really leaves an impression in the last 20 seconds though, and with a striking visual performance this has all the potential of leaving jaws dropped in Tel Aviv. One of the front runners for sure!”

James – 4 – “Is the band name a reference to the Schwarzenegger / Verhoeven masterpiece “Total Recall”? Anyway, they’ve done Ukraine’s national selection before in 2016 and have the biggest profile of the artists here. Their video for “Houston” brags about using a purely mechanical non-electric instrument setup and show it. Big whoop! Eurovision is a contest where you don’t play instruments on stage. They can bang on a toilet on stage for all we care. Notice I haven’t mentioned their song? Because it’s a dreary indie pop number with a bunch of mumbling and “Houston, we have a problem” as a chorus. The song’s as pointless as their 20-in-1 instrument contraption.”

Sean – 7 – “As a Europhile from the UK, any casual mention of Brexit in a song is an automatic point deduction! All things politics aside, BSB are clearly talented musicians (as shown by their impressive contraption from the live video) and this is a very Western feeling indie pop crooner, which is very easy to go with the flow of. Perhaps it’s too laid-back to drag in points from across Europe, but this is quality.”

James – 2 – “A Ukrainian on the mumbling variety of hip hop with no real hook and bass that bobs along like a grilled cheese sandwich floating in a bathtub. And the aye aye aye aye aye aye over and over again and the wind chime-esque instrumentation lulls you to sleep. As with Yuko, the YouTube commenters tell us he’s got something to say in Ukrainian. So staging would have to be this song’s salvation, though it’s a tough ask as the track is audio NyQuil.”

Sean – 7 – “The vocals remind me a little bit of O.Torvald if they tried their hand at minimalist electropop, and while this is a decent track it just lacks a little bit of spark to make it really awaken the senses. I’m not sure how they will shorten this to three minutes also, as the most interesting part of the song comes well after this timeframe and sometimes songs in this genre are as much about the journey as they are the end.”

Here’s what mine and James’ scores combine to…

So between us, we have decided that The Hypnotunez and Maruv both deserve to top the semi-final, with Letay in third and Vera Kekelia fourth. But will this be the case later on this evening?

Stay tuned to #escYOUnited as we bring all of the results later!

Who do #YOU want to represent Ukraine in Tel Aviv? Share your thoughts with us on our forum HERE or join the discussion below and on social media!