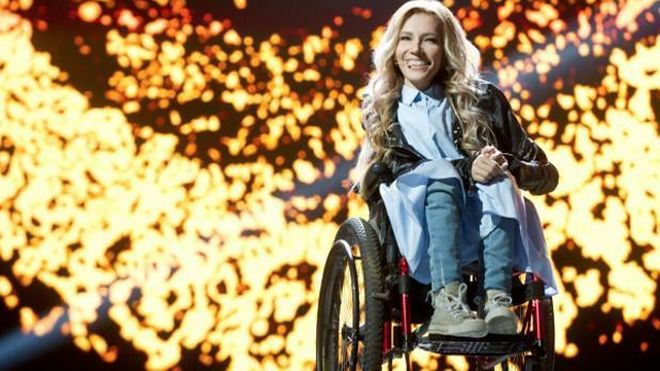 Today has seen the Eurovision Song Contest thrust into the limelight once more, although this time it has been for unsavoury reasons. Ukraine’s national security ministry, the SBU, this afternoon confirmed that Yulia Samoilova would not be permitted into Ukrainian territory to represent her native Russia in Eurovision in May.

Since the confirmation, the news has spread far and wide and has seen the contest as one of the highest trending topics of the day on social media. Here’s how some of the international media reacted to the news.

“It has been confirmed to the EBU that the Ukrainian authorities have issued a travel ban on the Russian artist chosen for the Eurovision Song Contest, Julia Samoylova, as she has been judged to have contravened Ukrainian law by entering Crimea in order to perform.

We will continue a dialogue with the Ukrainian authorities with the aim of ensuring that all artists can perform at the 62nd Eurovision Song Contest in Kyiv in May.”

“This is an official statement from the Russian Eurovision Fan Club OGAE Russia to the Russian state broadcaster Channel One Russia, European Broadcasting Union and anyone responsible for the Russian participation in the Contest.

We believe that in spite of the difficult situation currently unfolding about the Russian participant, Yulia Samoylova, Russia should restrain from withdrawing from this year’s Contest which is set to take place in May in Kyiv. Unfortunately, due to the political situation, Yulia was denied an entry permit to Ukraine, and there is a chance that this ban will not be lifted until the event takes place in May. However, this entry ban doesn’t automatically translate into a member country’s expulsion from the Contest. The Russian entry is chosen and has to be performed in front of the European audience.

We believe that nothing will highlight the existing discrepancy between the Ukrainian stance and the contest’s values of diversity and inclusiveness promoted in the slogan of this year’s contest “Celebrate diversity” better than the Russian song being performed on an empty scene. The rules of the contest allow for backing vocals to be performed on record, while Yulia’s image can be shown on LED screens.

Our position is such that in a case of a complete renouncement of participation in Eurovision 2017, Russia will come under a thumb of the host country’s populist games. If there is a chance that lingers for Yulia’s voice to be heard we should make it heard.”

“The Eurovision song contest just got political. Russia and Ukraine are now locking horns over Moscow’s choice of competitor.

There is already a predictable chorus of fury here. A deputy foreign minister called the ruling outrageous, cynical and inhumane – no less. One MP is demanding that the contest is moved to another country while a second warns that Russia will boycott every Eurovision to come unless organisers intervene to resolve this.

Some suspect this is precisely what Moscow wanted when it chose Julia Samoilova, knowing that she had travelled to Crimea.”

“As soon as the 27-year-old, wheelchair-bound Samoilova was selected as Russia’s participant with the song “Flame is Burning,” information about her Crimean performance soon was revealed, and SBU launched a probe to determine whether it was correct.

Some Ukrainian politicians and officials said that Russia had deliberately chosen Samoilova to represent the country to provoke controversy.”

“In the past few weeks, Samoylova has told reporters that she doesn’t view Eurovision as a politicized contest, and said she hoped merely to sing her best.

Anton Gerashchenko, an aide to Ukraine’s interior minister, Arsen Avakov, has reportedly threatened to detain Samoylova, if she attempts to enter Ukraine, saying, “Our Western partners will understand this decision.”

Jon Ola Sand, the European Broadcasting Union’s executive supervisor of the Eurovision Song Contest, says any decision about allowing Samoylova into Ukraine can only be made by Ukrainian officials. The competition’s organizers, he told reporters, “fully respect and observe” the laws of Ukraine.”

“The decision to bar the Russian singer, who has used a wheelchair since her childhood, from entering the Eurovision host country was announced on Wednesday by a Security Council spokeswoman. (…) The Russian Foreign Ministry is “outraged” by Kiev’s decision, ministry official Grigory Karasin told Interfax, calling it “a cynical and inhuman act by Kiev authorities.” (…) The Kremlin subsequently voiced concern over Kiev’s statements, with press secretary Dmitry Peskov expressing hope the singer would be able to participate in the song contest in Kiev in May.”

We will bring you more updates on the Russian artist situation as we hear it. Stay tuned to escYOUnited.

What do #YOU think of this situation? Share what you think with us on social media or our forum!