Home Andorra The Oscars meet Eurovision: The Elsa from Spain 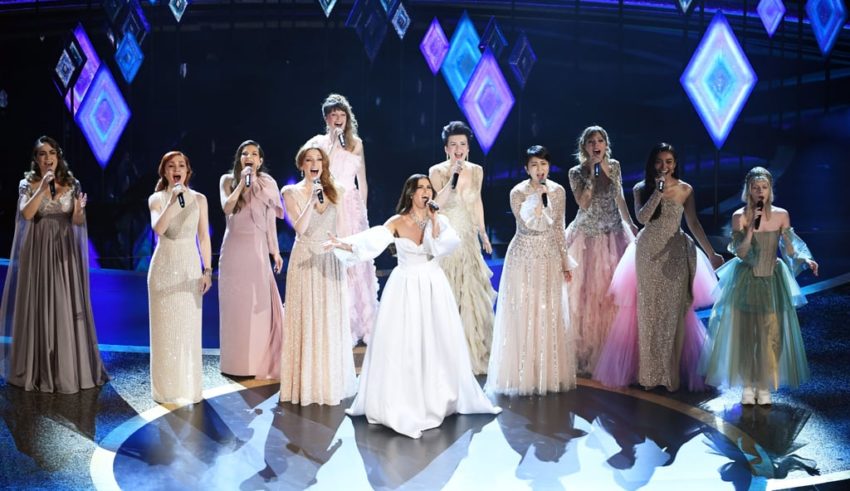 It’s not very often that American audiences get to meet the voice actors and singers from around the world for an animated character, but the Oscars decided to make that happen last night. Frozen 2 broke box office records for the 2019 holiday season, bringing in a total of $130 million in North America and $228.2 million internationally and overshadowing all other movies in the box office. To add to the movies clout in the industry, it has also been nominated for over 74 awards world wide since it hit the screens two months ago.

With all of this surrounding the film, the performance Idina Menzel and Norweigan artist AURORA made perfect sense, it was good exposure for the song nominated for Best Achievement in Music Written for Motion Pictures and it would draw in viewers to watch Menzel’s performance. But it’s the Oscars, so you have to go big or go home right? Someone on the production team decided that they needed to go big, and invited 9 of the international versions of Elsa to join the performance and sing the hit song “Into the Unknown” in their native language. The Elsa’s on stage and the languages they represent were:

Now you are likely wondering, what does Frozen have to do with Eurovision? Well that’s a good question, and for those who are not long time fans of the contest or who cannot remember names, the Catalan and Castilian Spanish Elsa is the very same singer who participated for Andorra in 2008 with the song “Casanova”.

Gisela was cast as the Castilian and Catalan voice of Elsa when the first movie was released in 2013, but this was not the first time she has worked with Disney on a movie. When she was 16 years old the studio reached out to her to perform the song “I’ll Try” for Disney’s Peter Pan 2 in 2002. She was then cast a year later to do voice work in the hit Disney film Beauty and the Beast. By this point she had created a strong relationship with the company – so strong in fact that they invited her back to perform as the singing voice of Giselle in Disney’s 2007 movie Enchanted for both the Catalan and Castilian Spanish versions.

This long standing relationship is what laid the foundation for her earning the role of Elsa’s singing voice for the Catalan and Castilian Spanish version of Frozen I and II. The choice made perfect sense, she was well known due to her participation in Eurovision, just like Idina Menzel she has a long list of musical theater credits to her name, she has six albums (three of which have gone gold), and she has the vocal range to pull off Elsa’s hit songs “Let It Go” and “Into the Unknown”.

Gisela is not the only Eurovision alumni to lend their voice to the Disney studio. Belgium’s very own Laura Tesoro was selected in 2016 to be the Flemish singer of Moana, Saara Aalto of Finland is the voice of Anna in Finland, Jacques Houdek of Croatia is credited as Aladdin in the Croatian version, Franka was selected as the Croatian voice of Rapunzel in Tangled, Zena of Belarus was the Russian Moana, and so many more.

In fact, according to a list created by the site lyricstranslate, 77 Eurovision alumni have collaborated with the studio to perform in the regional versions of Disney classics.  If you look closely you will also notice that Svala is credited on this list for 20th Century Fox’s animated film Anastasia, given that Disney purchased the assets of the company in 2017.

Call it a theory, but it looks like the studio may be watching Eurovision to discover regional talent for their next films.

What did #YOU think of the big Oscar’s performance and Gisela? Let us know in the comments, on social media, or on our forum!