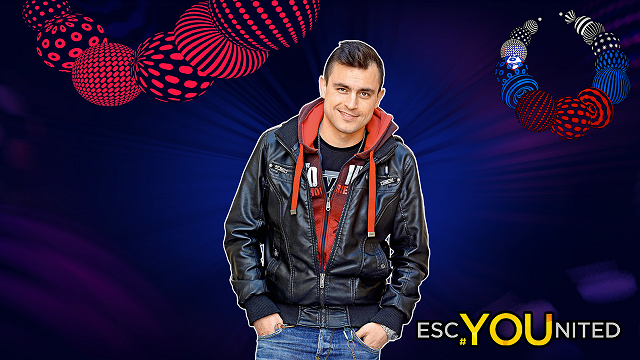 Slovenia: Omar Naber – On My Way

Matt – 8 Points
Big fan of Omar’s voice so I’m probably bias going into this. Yes, I get it, it’s a Disney ballad and it’s not “modern and contemporary” but I couldn’t care less about that. The chorus is really, really pretty, totally works for me. The last minute is even better, I could just rewind it and listen to it over and over again. Now, let’s talk about the lyrics, or maybe we shouldn’t. “World is calling out tonight?!?”. Nothing really makes sense, what he is trying to tell us? It’s so shallow, it drives me nuts. Can we send a lyricist in to fix this mess? I want to love it more but the horrible lyrics prevent me from giving it a higher score. Laziness when it comes to song writing, call it a pet peeve of mine.

Robert – 7 Points
I was so chuffed when this won the National Final. I was a huge fan of “Stop” from 2005 and thought this was also pretty darn good. I have to admit, though, that it’s not quite held up given the excellent competition this year. It certainly has an excellent build and vocally he’s pretty much flawless. It’s just that it relies a little overly heavily on its chorus as the only standout feature of the song and it kind of loses its punch by the end. Also, in a year that’s quite ballad heavy, his only standout part is that he is male. It doesn’t have the same strength as, say, Finland or the UK does and that will hurt it come May I fear. I enjoy it, but I don’t expect it to do well.

Stefan – 6 Points
It’s so interesting to have Omar representing Slovenia in Kyiv both times. It is a bit too slow, but you have to admit it has some charm in it. It’s same like with Lithuania, I can see it go both ways, in and out.

Zack – 4 Points
Nice little pop song that would have been perfect in Kyiv in 2005, not 2017.  This is very reminiscent of a song that would be the winner’s song for an X-Factor competition.  It’s safe, but may be too sterile.  This is not to say that Omar is not singing the hell out of it.

Nenad – 4 Points
Monotonous and flat. “On My Way” is a typical Eurovision ballad that dates from early ’10. The song doesn’t have power – it’s with no clear conclusion. I do not want to allude about a possible bad result. There is nothing that gives me the chills, but the performance with black and white resolution, being the only thing I like about the song. Plus, I like to see a good comeback at Eurovision.

Calvin – 4 Points
Especially post-revamp, this one is a bit unsure of what it wants to be, never fully committing to any of the ideas it has. Is it a Bond-esque ballad, as the first two seconds suggest? Is it a pop-rock anthem, as the verses suggest? Is it a midtempo pop song, as the chorus suggests? Inversely to Lithuania, it comes off almost ashamed of all these possibilities by shifting between them. Omar’s vocal performance, however, comes off very well; these lyrics seem to mean a lot to him. If only the song could put that sincerity into the music.

Ferdi – 3 Points
Oh well. Omar did pretty well in 2005 but this time his entry is way less impressive. It’s a ballad that, for me, just drags on and on and on. His voice in the high notes irritates me too, sometimes, which doesn’t quite help the song to move up my rankings. Sorry Omar.

David – 2 Points
For us hardcore Eurovision fans, we should know who Omar is. Now he is finally back, since he has tried so many times in Slovenia over the years. However, I’ve always felt there is a big problem with singers, who keep trying until they finally win. Because if you try so many times, then eventually you end up with something that is actually not as good, and this is what I feel with “On My Way”. It fits Omar’s style of course, but there is nothing in this song that keeps me interested. I’ll give him some credit for his vocals, but other than that, there is not much too it.

Romeo – 1 Point
If somebody told me this was also sent alongside “stop” in 2005 I would not be surprised. It is very dated and I think BQL would have been an amazing choice for Slovenia. This is not going to the final and I don’t see why it should. I think this song has flopped in Eurovision 1000 times before. Sorry. On a positive note, Omar has not aged a day since 2005, he looks exactly the same.

Gerry – 1 Point
Omar should’ve taken some advice from his 2005 Eurovision song: stop. In fact, I much prefer “Stop” to the uninspired “On My Way.” Whereas, 12 years ago, Omar’s song was much more genuine and original, his current attempt isn’t even on top of the list of ballads this year when it comes to quality. It even sounds like it’s specifically written to highlight the weaknesses in Omar’s voice, which sounds a bit grating at the higher notes. This entry would absolutely not survive the bloodbath that is the first semifinal. I wouldn’t be surprised if it came dead last.

Sean – 1 Point
Oh dear oh dear oh dear. Slovenia had some absolute gems in their national final but they went for this drab, anonymous drone of a song. Omar is certainly a man of conviction and sells the song well, and has a great voice, but the mere fact that there is nothing to the entry at all makes me wonder who voted for it. Slovenia need to go back to picking entries that are at least somewhat interesting – United Pandaz or BQL would’ve been far better choices. The worst song of the year for me…