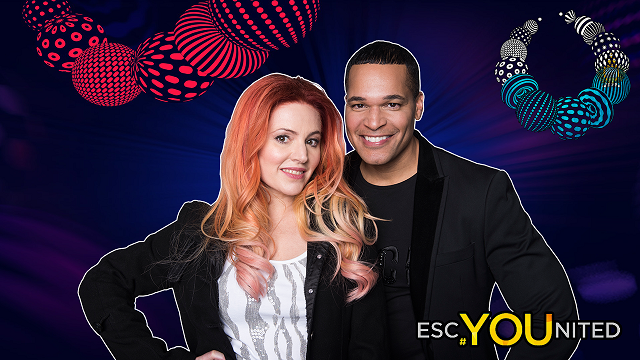 Calvin – 10 Points
San Marino’s song is a glorious romp which stays in the head hours after listening. The composition itself has build and energy, hearkening to soul-based musical theatre. Despite being a club banger operating with a formula, it adds small deviations from the norm, like the percussion-only chorus later in the song. The artists themselves somehow elevate this beyond its incredibly fun composition; Jimmie & Valentina complement each other perfectly, with Jimmie bringing a very classic sound through his voice and Valentina bringing energy levels higher. Though not Valentina’s usual style, she doesn’t sound remotely out of place.

Jordan – 10 Points
Say what you want about Valentina Monetta, but she is a legend of Eurovision and her passion for the contest is unparalleled. Teaming with Jimmie Wilson, their disco track has been polarising, however, strip away your prejudices and it is the most joyful melodic party anthem of this year’s contest in a sea of ballads. Whether you like it or not, this should make it stand from the pack and I predict a qualification

Robert – 9 Points
The Eurofandom went crazy when it was announced that Valentina would be making her fourth trip to the contest this year. Few expected her to return and even fewer expected this as her song! It’s SO. MUCH. FUN!!!! It’s *the* dance song of the edition. The beat pushes this song along so quickly with Valentina being the life and soul of the party which is encapsulated so well. It sweeps you along and just puts you in the mood for dancing. One tiny fault and that the key change feels a little contrived when it comes. But overall, it stands out from anything else we have this year in such a good way and I hope they get the staging right come May because this has the potential to get Kiev dancing as they’ve never danced before. Fabulous bop! 9

Gerry – 7 Points
Queen Valentina is back and, this time, she’s brought American musical thespian Jimmie Wilson with her to perform a disco Eurodance tune that’s sure to get people on their feet at Euroclub. “Spirit of the Night” features great vocals from both singers, and their stage experience will surely serve them well at Eurovision. San Marino always has a difficult time getting out of the semifinals, but this song may just get them their second qualification.

Zack – 7 Points
Following Serhat’s lead from last year, San Marino is offering us a tasty throwback to disco.  Ralph Siegel’s fingerprints are all over this, but unlike “Chain of Lights,” this is not attempting to be anything more than just feel-good music; and this is where he excels.  Not my favorite song of the bunch, but one I will definitely watch for in Semi-Final 2. And one I will welcome among all the mid-tempo songs and ballads.

Stefan – 7 Points
Yes, the Queen of San Marino’s Eurovision circle is back! Valentina and Jimmie work just perfect together and the song is something that will stand out in the ocean of ballads. I am hoping that they will rock the stage and amaze the crowd and the viewers and of course bring San Marino their second qualification.

Nenad – 6 Points
San Marinese entry for this year Eurovision is very old-fashioned and dated. It sounds like disco song from 1990. By the way, I adore Valentina and enjoy seeing her success. Adding Jimmie makes this song international, but still from San Marino. It will be nice to see this stuff on stage. My fingers are crossed.

Matt – 6 Points
Disco Throwback FTW. Both Valentina and Jimmie have shown that they are capable vocalists with great energy so this will come down to the live performance. San Marino is always an underdog and you can’t help but wanting to root for it. And the fact that this is enjoyable enough, certainly helps. I’m a sucker for great harmonies and the chorus definitely deliver but I wish the verses were a lit less confusing. Lyrically, I can’t say it’s a masterpiece but that won’t really bother most people though it matters to me.

Romeo – 6 Points
Well this is different, very dated but really addictive. We all love Valentina but I do prefer “Crisalide”. I think this has the potential to make the final and could well be San Marino’s best result in Eurovision. Its basically Alcazar, but I like it.

David – 4 Points
The queen of San Marino is back, and this time with someone else on stage. I personally think this is Valentina’s best song in the contest, out of her 4 attempts. Despite the low score, then it’s because the song doesn’t really lift me to the party point, when I can call this a club song. We are more out there where we wish to end the party, since it’s quite slow for a up-tempo song. However, I really like the fact that Valentina will be singing with Jimmie on stage, a song that is uplifting compared to her other songs.

Sean – 4 Points
Well I didn’t know what to expect from the Sanmarinese entry, but we’ve learned to expect the unexpected – and this was out of the blue alright! Valentina is a living Eurovision legend but sadly this is the weakest of her four attempts. It’s catchy and fun, Jimmie and Valentina are both charismatic and lovely, and I’m sure it’ll be a surprise Euroclub hit, but in terms of strong songs this year it’s far from competitive, and it pains me to say that.

[socialpoll id=”2436028″]
This is the current ranking of the Panel, you can see all Reviews by clicking HERE.