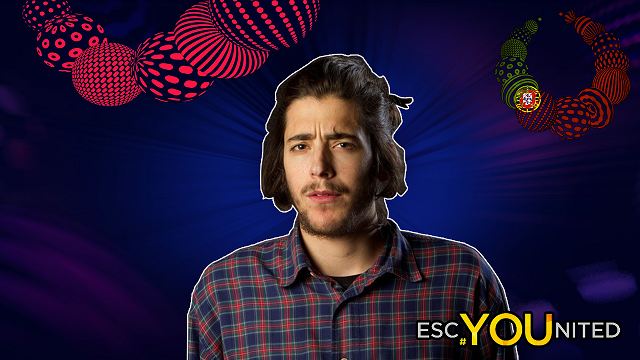 Matt – 10 Points
Yes, Yes,Yes. Italy put it best in 1985 when they sang “Magic, oh Magic”, cause that is what the Portuguese song is to me. The melody is sad yet almost playful and the beautiful violin solo just move me to tears. Salvador’s unique interpretation elevates this to an even higher level and I can barely contain my excitement. I am nervous about its chances in Kyiv but I am hoping that this will go big with the juries and will get at least some support from the televoters. My hat is off to Portugal, this could potentially become their best result to date which would be absolutely deserved.

Robert – 10 Points
Ahhh Portugal. The country with possibly the worst record in the contest with dogged determination to send music entirely in Portuguese. This year, they do exactly the same and suddenly people are talking about them winning! Confused, well yes, I am! Don’t get me wrong, I adore the song. His voice is so sweet and melds so well with the music that it’s like a lyrical waterfall gently washing over you. It just doesn’t sound or, look like, a Eurovision winner to me! Instead it is a sweet, fragile and touching song with a gorgeous, spot on vocalist singing it. Rarely has a song matched its singer quite as well as this does here. It’s possibly the finest example of Portuguese music we’ve seen, and whilst I’m hardly expecting a win, I hope this does very well come May.

Gerry – 10 Points
Portugal is back, and with no less than a masterpiece in “Amar Pelos Dois.” While its detractors might call the song dated, it’s anything but. The classic sound is timeless, brought to life with the sincerity in Salvador Sobral’s performance. A shining beacon of pure, innocent emotion, Salvador and his song are a much-needed breath of fresh air in this cynical world. No other song this year comes close to the genuine feelings in this song. One of the very few songs in this year’s lineup sung entirely in a language other than English, the song should stand out in the already hotly contested first semifinal.

Zack – 10 Points
When translated, the lyrics are sweet and touching, but to keep them in Portuguese makes the song sound so much better.  Salvador’s voice is delicate yet heartwarming; but his quirks while performing make him even more of a pleasure to watch.  Sometimes I wonder what the audience from the first few Eurovisions would think about Eurovision today; this song represents the credibility that Eurovision seek.

Calvin – 10 Points
Portugal’s entry is difficult to talk about. To say Salvador sings is inaccurate; instead, he feels, and does so deeply for every word. But that ignores how ahead of the pack he is vocally, having delivered eerily perfect intonation at Portugal’s national final even without an earpiece. The composition itself, courtesy of Salvador’s sister, is stunning: it’s a very authentic version of the jazz traditions it takes after. The song being in Portuguese helps as well; it adds an air of mystery to what exactly the song’s message is. This is my pick for best of the year.

Nenad – 9 Points
This song is like a wine. First zip is very unpleasant, but each other zip cleans my soul. The performer has a very honest voice, like an angel. His performance is so true and magnificent. Salvador is a unique singer that leaves us breathless. Lisaboa 2018?

Sean – 8 Points
I was one of many doubters as to whether Portugal’s return and persistence with Festival da Cançao would yield good results, but the Iberian nation has silenced me quickly with a classy ballad oozing in charm. In a big glitzy contest such as this, it’s a welcome relief to slow it down for 3 minutes and soothe the audience. A simply beautiful song from Portugal. Does a best result beckon?

Jordan – 3 Points
I admire Salvador’s struggle with illness and hope he overcomes everything. However, this song is a dirge. There are very few, if any, merits to the song: no rhythm, no melody and no real structure. I think it is fantastic that he is singing in his native language, something that is not done enough at Eurovision these days. But, this song sounds like it is half finished and it will be a travesty if it qualifies.

Romeo – 2 Points
Some people love this. Me, on the other hand.. I think it is just boring and does nothing for me. It is the same song that Portugal have had in their national final for 30 years. I don’t see anything special in it. You can listen to this sort of song in a cocktail bar or something. For Eurovision, not a fan.

Stefan – 2 Points
I just don’t understand the fuss about this song. He does have an untipical kind of performance, he is singing in Portuguese, and the bookies have his song on the top, but again I have to say WHY??? IMO, the song is boring, totally not for Eurovision (Even RTP said that for the Festival da Cancao they wanted songs for domestic public, not European), kudos for alleged success, but it’s not a good song for me.

David – 1 Point
I’m really sorry Portugal, but this sounds so old. Salvador has his charm on the song, but I just get bored and sleepy when listening to this. I just can’t.