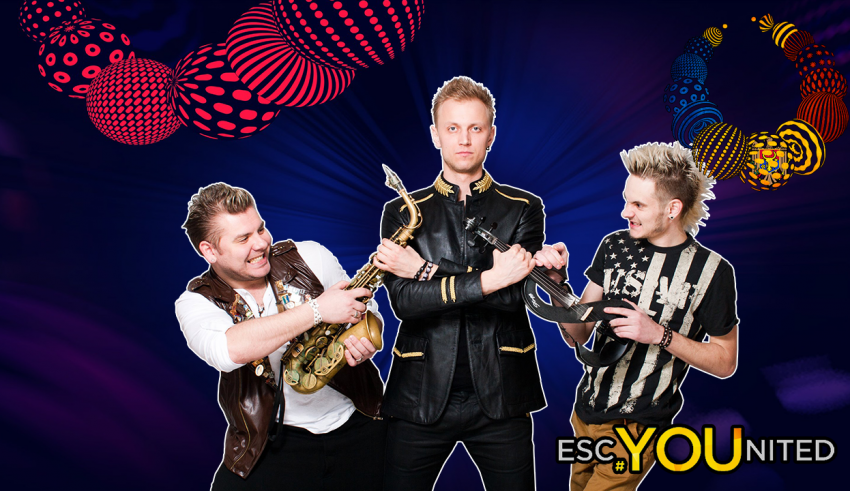 David – 10 Points
I won’t say it’s a special sign, but this song was officially released on my birthday, and it sure made my day! I’ve literally been hooked on this song, since it’s release. I’ve been a big fan of Sunstroke Project since I first heard about them, most of their material is just awesome in general! I was very nervous as well, during the national final, the joy I had when they won… can’t even be described. I mean, according to my iTunes playlist, I’ve heard the song more than 700 times in less than 2 months, that alone should say it all. If I wish to start up a party, then this would be the song I’d start with.

Romeo – 8 Points
This is a tune!! Its different and I think it will stand out with their connection on stage. I’m working under the assumption that they will have a similar performance to the NF and that was really effective I think. This is going to go down well. I can listen to this song over and over and not get bored.

Gerry – 8 Points
I blame my Eurovision addiction on SunStroke Project’s Epic Sax Guy Sergey and so I was absolutely thrilled that this trio are getting back on the Eurovision stage. This is the Eurovision I fell in love with: upbeat, full of life and with questionable English lyrics. They all look like they always have so much fun onstage, and that energy’s going to come across well with viewers at home and live at Kyiv. I have no idea what vocalist Sergei is singing half the time, but I don’t care. I’m ready to dance to this until sunrise. *cue epic sax solo*

Stefan – 7 Points
This will bring the crowd in the IEC up for sure! I can’t say it’s an amazing song, but it is one of the good ones. The thing I don’t like is the leg dance. But it deserves both thumbs up

Nenad – 7 Points
SAX GUY IS BACK! A very modern sound this year from Moldova. ‘Hey mamma’ is fresh, pleasant, innovative, disco and easy to like. This song has been split into three parts that are mostly the same, but differ in very small segments- and the each has a glamour of Eurovision. Interesting! The fact I do not enjoy about the song is that it is flash and fast. The stage performance which, if it is cheap and trashy, could ruin everything. .

Zack – 6 Points
Eurovision needs Moldova because they bring the crazy year after year. Whereas their last entry in 2010 felt about 10 years too late, this feels to be on trend with current musical tastes. The “Epic Sax” break is welcome and probably the highlight for me in the song (whereas it was a distraction to me in 2010). There is something irritating yet infectious about this song. I feel this is the country’s best chance yet since 2013 to get back into the Finals.

Sean – 6 Points
I think the selection of this song came at the right time where there was a dearth of upbeat, danceable music, so perhaps I thought it better than it actually is. It’s nowhere near as powerful or unique as Day After Day from 2015. However, it would have me shuffling my feet on the dancefloor and put a smile on my face. Sometimes, that’s all you need from a song!

Calvin – 6 Points
There’s a lot to like here. Tropical house is definitely an interesting idea for Eurovision, and the production in the verses stands out even within the genre. Epic Sax Guy does a solid job per usual with an earworm after the first chorus. But the song has its flaws for sure. The lyrics are pretty sleazy, possibly being lost in translation, and the chorus takes away the synth that makes the production in the verses so pleasant to listen to. A solid effort nonetheless.

Matt – 6 Points
I’m going to say something that may be considered controversial: I like Epic Sax guy 2017 way better than the 2010 version. Another viral video in the making, mark my words. But I’m here to talk about the song. Let’s not kid ourselves, this is NOT a sophisticated composition. It relies on clichés by using memorable words, a repetitive chorus and some predictable gimmicks. But dang, this is so catchy and I shouldn’t be liking this. If you look past the silliness, you can enjoy this Hey Mamma for what it is, a catchy song which makes your feet tap.

Ferdi – 5 Points
The return of Epic Sax Guy, who I (and a lot of Internet users) loved 7 years ago. The Epic Sax Guy is still epic (obviously) but the song is less so. It’s catchy but there are better uptempo songs and to me this feels like a watered-down and more… amateuristic version of their 2010 effort

Robert – 3 Points
Alright, so Epic Sax Guy was cool back in 2010, but I never really got massively into the song itself in the contest. I feel that this is an even worse example of their music. The backing music annoys the heck out of me throughout the song and I really wish they could avoid it. The lyrics are hardly anything to write home about either; overly repetitive and hardly a lot to get into. The saxophone parts also feel somewhat insipid. The overall package just doesn’t gel well for me and whilst I appreciate the more left-field entries at Eurovision (and integral part of the contest for me!), I feel that this is more of a messy miss than anything else.