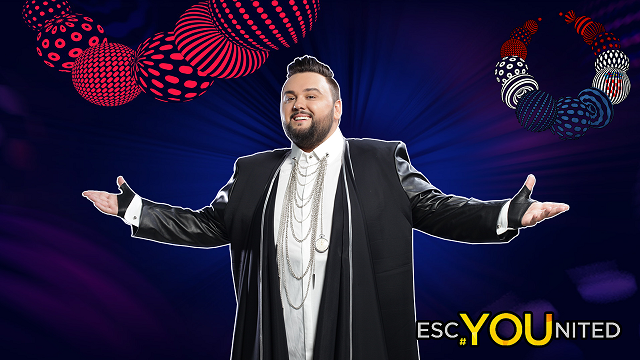 Robert – 7 Points
There are not many duets this year, but this song surely counts right? I think the first question people will ask is how the heck will be able to sing this live at Eurovision given the complete change in how he sings the different parts of the song?! Few people have tried to duet with themselves, but he certainly has an excellent go at it here. It’s got whimsical touches at times, which I really appreciate. I was thoroughly in love with it at first, but I have to admit that it has fallen a little in my personal rankings, just as the novelty wears off. It’s fun as an entry, but there’s not a lot behind that and I worry that it just will not strike a chord with people too much in May.

Calvin – 7 Points
Okay, it’s tough to sit through. Okay, the concept is ridiculous. Okay, it takes itself much too seriously. But that’s what Eurovision is about. This song makes bold, interesting choices: ones that don’t completely pay off, but it at least tries. In a year where many songs shy away from risk or are afraid of looking silly, that’s an amazing breath of fresh air. Additionally, even though he uses it to strange effect, Jacques’ vocal on the song is impressive; he shows command of two different styles and many parts of his range

Nenad – 7 Points
Three or even more song this year comes from Croatia and it is reduced to 3 minutes. How Jacques?! Jacques is a big star in Croatia, all the Balkans know that. His dream will be reached when he steps onto the Eurovision stage – he clearly spoke about that. A lot of effort has been put into this song, more than 8 months. He will have an orchestra on stage and great team behind. Modernism and renaissance on Eurovision stage. Gotta love it! But, I am not totally clear with it.

Romeo – 4 Points
Starts off like Netherlands 2005 “I have a dream”. It is a strange little song this one. I am expecting him to have one half of his body dressed in a black suit and the other in a white one and he turns around for the corresponding vocal style. I think it is too gimmicky / strange for people to understand it. Its a nice song but that is all.

Jordan – 4 Points
There’s a really decent melody in this song. However, it becomes an object of ridicule thanks to the alternating vocal styles of Jacques Houdek. When listening to this song, I have flashbacks to Cezar. This song will live or die on its staging and live vocals. There’s a huge margin for error.

Stefan – 3 Points
Well his wish came true, but at worst possible momment, and with a song that very likely won’t do well and when it does happen he will accuse other people, not himself for going with an underaverage song. His voice is amazing, but this kind of showing off will go in bad direction. I have to say that, for me, it’s the worst exYU entry

David – 3 Points
We are back there, where it get’s awkward. Sadly, not in a good way. I must admire Jacques for his impressive voice control and singing abilities, but singing a duet with yourself like that. I just don’t know what to think then. The main problem for me, is that I can’t focus on the music or the lyrics, but mostly over the 1-man duet. This is a big problem, because the song has a great message, but if I can’t focus on the lyrics, then the problem for me should be obvious now. My points for this one, are solely based on the vocal abilities.

Zack – 3 Points
The lyrics are the most generic of this year’s Eurovision.  But the vocals are good, particularly when sung in English.  However, the delivery is clunky and confusing.  A duet with oneself is novel and unique, but just because something has seldom been done does not mean it has to be done.  Still, I speak now and have yet to see what Croatia has planned in Kyiv. In Eurovision, the performance is just as important as the song and this may come together with the right staging that can highlight the dualities of all the songs aspects.

Gerry – 2 Points
I have no idea whether this song should be taken seriously or not, but either way, “My Friend” just isn’t good. The concept is interesting: Jacques duets with himself, his higher register standing in stark contrast to his vocal bass, but it just comes across as ridiculous. I can’t help but find the message incredibly patronizing, especially with Jacques’ opening words where he talks about believing in miracles. Perhaps the most commendable part of the song is that it’s partly sung in Italian. At the very least, the stage performance will definitely be something to watch out for.

Matt – 2 Points
What a mess, I’m really wondering what they were thinking; Hey, let’s send a duet but only send one singer?!? Jacques can sing but that’s the only positive thing I can say about this entry. The song is weak and uninspiring to begin with, the switch between pop and operatic voice is weird enough but then he has to sing in two languages on top if it? Give me a break. I guess Croatia was trying to try something different and they succeeded, I’ll give them that. But I just can’t, the whole packing is borderline disturbing. The fact that the lyrics are oozing cheese is the icing on the cake.

Sean – 1 Point
Is Jacques fully aware of what he’s putting forward? Have bosses in the Croatian broadcaster genuinely nodded their head in delight and said “This. This is the song.”? Is he going to wear a half and half costume? Why go for this after last year’s great effort set a benchmark? This raises so many more questions than it answers. Utterly baffling choice…