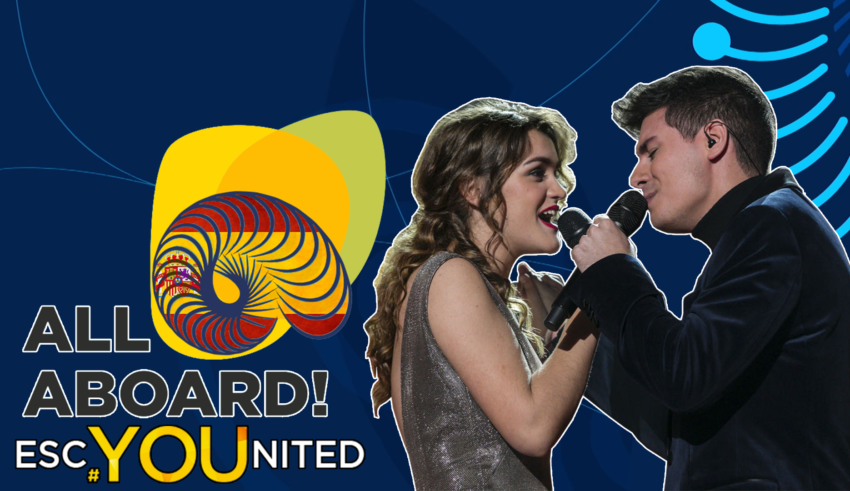 It’s back! The (in)famous ESC United “Expert” Panel is back! While we don’t claim to be professionally qualified, we certainly have strong opinions on the contest, so our staff and editors got together to review all 43 of the songs taking part in Lisbon later this spring! Which song will we pick as our overall favourite, and will #YOU agree with us or pick a different winner?

First up this year is Spain, who will be hoping to pick themselves up off of the bottom of the scoreboard in 2018. Alfred and Amaia are bringing a sweet Spanish ballad to their most local contest for years, but will Spain make a big impression in neighbouring Portugal?

Read on for our thoughts, and check the bottom of the article for your chance to get involved with our panel…

Connor – “I had doubts about this song when I first heard it, but the revamp has really brought it back to life. I can fully understand why the Spanish fans are crazy about these two, they’ve got amazing chemistry and voices. Their biggest challenge will be to shine against some amazing entries in the grand final. Hopefully Spain can return from their last place finish in 2017.”

Efe – “When I first listened to the song, not many were revealed and it became a huge favourite of many Eurovision fans. “Tu Cancion” is a very emotional and appealing song and this year, we could easily say that Spain took the Eurovision Song Contest seriously. Alfred and Amaia’s voice are matching each other in emotional and mesmerizing ways. This masterpiece strikes at the heart of me!”

Matt – “These two young singers are in love and they want to tell the whole world by sending Tu canzion. I can’t help but love this one, yes it may be a tad outdated but with the newly revamped version, I just feel the love and I particularly enjoy the harmonies. This could go big with the juries but Alfred & Amaia need to be really careful with the Staging so don’t make it too lovey-dovey, it just doesn’t translate well.”

Calvin – “The melody and lyrics to this song are a touch cliché (the first line of the chorus literally translates to “I feel like I’m dancing for the first time”) but adorable. Real-life couple Alfred and Amaia bring real sentiment out of its more tender moments. Given how pure and gentle their chemistry is though, the production is a bit much, especially at the end. I’m worried that the revamped version will force Alfred and Amaia to go louder with the vocal and lose the quiet, intimate qualities of the original; Amaia’s soft-spoken voice could be an especially odd match.”

Robert – “This is a really gentle and sweet song – I cannot recall the last time we had a duet where the two were actually dating! The chemistry certainly shows in the song – especially in the live performances. It is a delight to see! However, I cannot get away from the fact that I really do not like Alfred’s voice. I concede it is totally a personal thing and perhaps I will get used to it by the contest proper, but his tone just does not quite capture the loving elements I expected from this song. Overall, however, a solid entry.”

Zack – “One of the better songs from Spain in this decade. I guess the story behind the duo and accomplishing their dream of singing together at Eurovision sort of outweighs the actual song itself, which is desperately trying to recapture their La La Land moment from Operación Triunfo.”

Christian – “This has the either hit or miss mark this year. It is sweet and lush but maybe also a bit dull. No vocal acrobatics, but do they have chemistry? Usually I like the songs from Spain but still not taken by storm by the live or the studio versions so far. A good old fashioned ballad but vocally they are not gripping me.”

Stefan – “Waaaay too cheesy. I just don’t get the hype about it and I am so sorry to say, but I think Spain will be near the bottom again. There’s always next year…”

Sean – “I’ve seen that a lot of people really like this song but it makes me feel a bit uncomfortable. The intimacy is turned up to 11 so I feel like an intruder while I watch their performance. They have a tangible chemistry because of this of course, but I’m afraid this just doesn’t move me at all. One of the blandest songs in this year’s contest, regardless of authenticity.”

David – “What a way to start it all, one of the worst songs of 2018. Hate me as much as you want, but this is just boring to me. All I’m getting from this song, is these two love birds singing to each other. It’s very rare I’ll like a ballad, so let’s just move on, cause there is just nothing to come for in this song.”

A controversial song already! Let’s take a look at how this leaves Spain in the current standings…

Now it’s time for #YOU to have your say! Were we fair on Spain, or do #YOU feel strongly about the entry in a different way? Share your short review of Spain on our forum and social media and #YOU could be featured in tomorrow’s edition of the “Expert” Panel!

Make sure to also vote in the poll below to help decide the ‘televoting’ score for Spain’s entry;

Check back tomorrow where we will reveal the final 50/50 score for Spain, and we review the second entry of this year. How will Azerbaijan’s “X My Heart” fare with the reviewers?

What do #YOU think of Spain 2018? Post your reviews HERE or get in touch on social media to be featured in tomorrow’s post.