There are two great pieces of news to come out this week to take your minds off terrible news like Trump’s racist “Go Back Home” tweets, the United Kingdom now being led by someone with the temperament of a coked-up ferret, and Newcastle being managed by Steve Bruce, a detective novelist whose football teams are famously allergic to entertainment. The first good piece is that we now have the running order for the Eurovision Choir 2019 contest, and second, a boxed wine company and Cheez-It have teamed together to sell their products in one package.

And it is in the spirit of the latter that I tell you about the former, because dear God, we Eurovision bloggers have been reporting on this contest with all the excitement of drawing up a list of chores. And the ten choirs entering deserve much more than that, so I thought I’d put together a guide to the contest and will follow up next week with a look at the entrants themselves. The choirs cover a wide range of styles, languages, and traditions, they deserve more of a write-up on ESC United than “Eurovision Choir 2019 is on Saturday, August 3, 2019, so tune in after you’ve cleaned the cat box.”

Grab your $25 combination box of Cheez-Its and House Wine’s Original Red Blend, and let’s get into the nitty gritty of the contest. 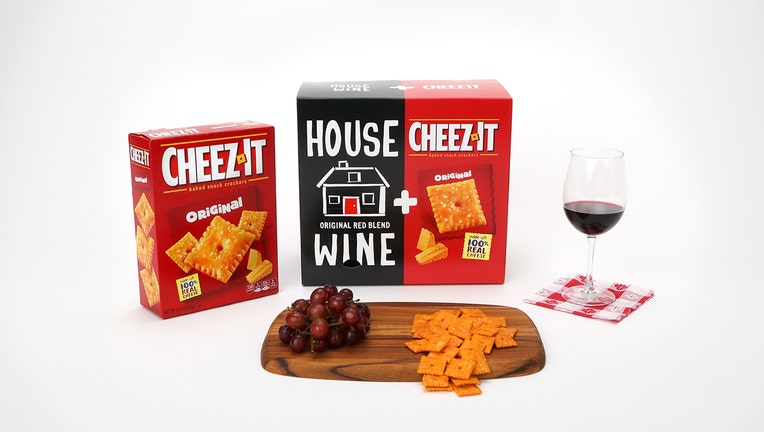 P.S. ESC United is not sponsored by Cheez-It or House Wine, no matter how many times you see this being consumed on the side of a canal in Brighouse or on the shores of the Salton Sea or a senior center in Rustavi.

First thing to note is that Eurovision Choir does not require the winning nation to host the contest. That is why Slovenia, who won the last contest in 2017, is not hosting. The hosts this year are Sweden, who are also making their debut in the Eurovision Choir contest this year. As with the main Eurovision, the event is executive produced by everyone’s favorite disapproving Dad Jon Ola Sand. The host broadcasters are Swedish broadcasters Sveriges Television (SVT), and it is through SVT2 that fans whose home countries are not broadcasting the contest will be able to view it (more on this later).

The event itself will be held at the Partille Arena in Partille, Sweden, which is part of the Gothenburg urban area. The Patrille Arena is home to handball team IK Sävehof, and ESC United’s Roy Postema has tried to explain what handball is. I get the sense it’s like water polo without water, but you can tackle like in rugby? IK Sävehof is apparently the Real Madrid of handball.

For those concerned about the acoustics in such a venue, the Partille Arena is also a concert arena, but not for the sort of music the Gothenburg area is known for. The Partille Arena has a capacity of 4,000 during handball games, but 5,503 is the maximum for concerts, which the Partille Arena accomplished in May 2018 with a Bryan Adams concert. Now if there’s a fan base that was the prime target for Cheez-It and Boxed wine, it’s Bryan Adams’s. If you are an office manager in Roanoke, Virginia, or Mason City, Iowa’s 3rd largest homeowner’s insurance agent by dollar volume, then Bryan Adams is for you, and that is not meant to be an insult. I just didn’t know there was a Swedish equivalent to the North American lower-middle class angst Adams spoke to, but 5,503 Swedes proved me wrong.

Eurovision fans are used to crap puns, jokes that land like the Hindenburg, and commentary that would make your eyes roll if they didn’t make them bleed first.

The organizers of Eurovision Choir 2019 decided to go with knowledgeable professionals over the incompetent pirates from Game of Thrones that they usually grab for the main contest.

The first presenter is well-known BBC journalist and commentator Petroc Trelawney, currently presenting the Breakfast program on BBC Radio 3. He’s been a fixture of classical music and opera radio, television, and print media since 1992 and is considered an expert in choral traditions of Scotland, Wales, Ireland, and his native Cornwall. He’s not new to EBU productions either, having hosted last year’s Eurovision Young Musicians 2018.

His co-presenter is Head of Cultural Studies for SVT2 Ella Petersson. She also hosts SVT1’s Kulturfrågan Kontrapunkt, which is a quiz show that focuses on art, literature, and music, as well as hosting the Nobel concert and holding down a decade plus gig as a classical music presenter on Sweden’s Radio P2.

In short, don’t go into the contest expecting shenanigans like this from your presenters: 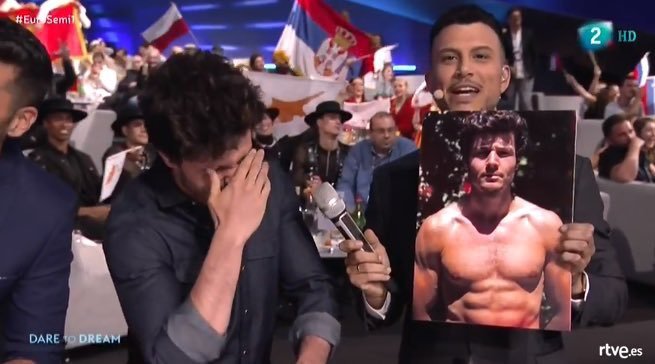 Alright televoters, here’s your instructions for dialing in, voting online, and texti… oh wait, never mind, you animals don’t get any say in the winners. That is left to three industry experts, and not the X Factor cast-offs that regularly feature for the juries for the main event (and feature as contestants as well, come to think of it) and result in titanic screw-ups like Belarus this year.

So the basic format is that there are two rounds of voting. Ten countries have selected a singing group from three to forty-five people to perform a four minute unaccompanied set that will be performed in the first round. The three judges will then advance three countries to the final, where each choir will perform a three minute unaccompanied song. And from that final three, the winner emerges.

A couple of rules for each set – the first round can be one song or selections from many, and the second round is one song. The song or selection must contain national or regional influence from the entering country, which is more limiting than the main contest’s old language rule in that the tradition, style and genre of the choral piece must also be relevant to the entering country. For example, Wales’s entry Ysgol Gerdd Ceredigion would have the choice of Welsh or English (they’ll probably do Welsh, as they have excelled in Welsh choral competition for decades now), but must limit their style to that that is typical of choral singing in Wales.

Head Judge for Eurovision Choir 2019 is British Choirmaster and conductor John Rutter, who was also a judge at Eurovision 2017. As well as founding the Cambridge Singers, he is a frequent guest conductor at big name orchestras around the world and wrote the book on choral classics – he is the editor of Oxford Press’s Oxford Choral Classics, a compendium of 300 of the West’s choral masterpieces.

Host nation Sweden provides the second jury member in Katarina Henryson, who is a founding member of the well-known Swedish a capella group The Real Group. A creative and cutting edge vocal group, you may have run across the song they did for Oxfam’s Clean Water drive. Whatever was in Bulgaria’s water at Eurovision 2007, though, I’d like right about now.

That video insertion had nothing to do with anything, really, except it’s awesome. Just wanted to put a positive spin on the main contest as a casual reader may think I’m slagging off the main contest in order to come off like a hipster praising the artistic virtues of a more niche contest.

Back to the judges, and the third ties in pop and the traditional in American a capella god Deke Sharon. He was music supervisor for the three Pitch Perfect films, and is founder and arranger of The House Jacks. Sharon has over 2,000 a capella arrangement credits to his name, is featured regularly on singing contests worldwide, including BBC’s “Pitch Battle,” and has written five books on a capella on subjects from vocal techniques to arrangement.

To summarize the judging, we’re unlikely to see any major controversies, and if any choir was to be judged on technique and performance, they would want to be judged by these three.

Quick question – what will happen fastest? A Londoner apologizing profusely to a mainland European for Brexit after first meeting them, or a Swede reminding you that ABBA is from their country? Or a comment stating that no-one uses the term “mainland” for continental Europe, in the same way no-one uses the term “Northern Hawaii” to refer to Great Britain?

As with the main Eurovision, we have an opening act, but Eurovision Choir 2019 has a twist – as twelve flags (the ten entrant nations as well as the City of Gothenburg and Eurovision Choir flag) are paraded on stage, all ten choirs will join together to perform ABBA’s “Mamma Mia.” This will be the first of three songs where all the amassed singers will perform on stage together.

The running order for the first round was released a couple of days ago by Belgian broadcaster Radio-Télévision Belge de la Communauté Française (RTBF), and is as follows:

But the second of the three performances by all choirs will not be by ABBA – the second will be a tribute to the late great Swedish DJ, producer and songwriter Avicii as they perform a cover of “Without You.” This will be performed after the first round of performances but before the announcement of the three finalists.

After the three finalists have performed their second round set and the jury deliberates, we get the traditional performance by the prior event’s winner, in this case Slovenia’s Carmen Manet.

Another difference with the main Eurovision – the winner does not reprise their winning entry after the announcement of the winner and the prize (A recording contract for the triumphant choir). This time it’s the third of all the joint performances, this time taking on ABBA’s “Dancing Queen.” (Please note that though Wikipedia says they’re closing off with “Thank You for the Music,” I am going with the official Eurovision Choir press kit that mentions “Dancing Queen” as the end song.)

Straight from the horses’ mouths at the EBU:

For Americans and other assorted non-entering foreigners, SVT2 is most likely your best chance of viewing without a VPN.

I hope you found this guide somewhat useful and not as dry as some others I’ve seen out there. With a fist full of Cheez-Its and a glass full of wine, I hope you join me on Saturday, August 3, 2019 at 8:30 p.m. CET to watch some great musicians and help find common ground and understanding through the enjoyment of song. Next time, I will have a look at the ten choirs participating.

Who do #YOU support for Eurovision Choir 2019? Any nations #YOU think should have entered (I see you Georgian reader out there)? Let us know in the comments, on social media, or in our forum.