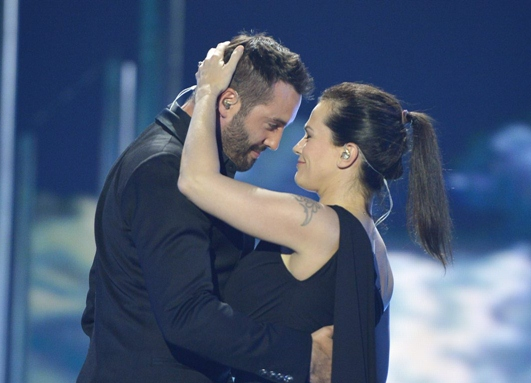 The ESC United “Expert” Panel is back once again reviewing all Eurovision songs and rank them accordingly.

You are probably asking yourself on how we pick our panel and the criteria. We looked at people from all walks of life to bring together a unique group of panelists with a wide range in taste. They all bring different skills and tastes to the table so who are they?

1. Anselm – the Alternative Guy
He often enjoys music that is different from what is commonly referred to as “Mainstream”. Whether it is Rock, Punk, Independent, his taste is unique to say the least. He may not go for the traditional song and he’ll bring a different outlook to the panel.

2. Arie – The Professional Musician
A professional trained musician, Arie is singer/songrwriter who enjoys all kinds of music but classic music has a special place in his heart. So your common dance track may not necessarily Wow him, unless it’s done well. He also enjoys Showtunes and wrote several songs for the Movie Musical “Waiting In The Wings”, not to mention orchestrated all songs.

3. Daniel – The Noob
Some say Eurovision is its one genre. Well, that will not affect Daniel’s opinion in any shape or form. As a matter of fact, he isn’t even really familiar with the contest. Has he heard of it? Yes, but that’s about it. He will bring a refreshing view to the panel as an “outsider” so we won’t know what he’ll go for.

4. Katja – The Schlager Queen
A huge Eurovision fan, Katja is very open and unapologetic for her love for Schlager. Yes, if we have a Panel, we need to have at least one person represent this community. They are the most loyal fans and I can tell you right now that she doesn’t care if you don’t agree with her taste, just deal with it. That’s the kinda attitude we’re looking for. Follow her on Twitter for more outrageous-ness.

5. Mike – The Smart One
Mike is the most experienced individual on the panel. He started his education in the 70s and studied at multiple Universities including the University of Tennessee at Knoxville,  The University of North Carolina and the University of Nice Sophia Antipolis. He’s currently a Professor of French and Linguistics and Samford University. How will the taste of someone as educated as Mike, differ from the rest of the pack?

6. Olivia – The Journalist
Olivia is a professional Journalist, who has worked for Purple Radio and the Tab Durham. She is now working for BBC (Jersey) and you can follow her on Twitter @Livvylepoids. We’ll find out soon how her approach from a Professional Reporter’s point of view is going to affect her taste.

Disclaimer: While we picked, what we perceived as a wide range in taste, taste is subjective to a certain degree so just enjoy their thoughts and if you don’t agree, feel free to post your comments below.

The first country that they’re taking is apart returnee Czech Republic and “Hope Never Dies”. Do they think this song has what it takes to take this country to the Finals for the first time ever? Let’s find out.

Daniel – The Noob
When I was hearing the first tone of this song I became frightened by Bárta’s chesty voice. No offense! I absolutely love his voice. It is so powerful and rough and I really enjoyed listening to it. The issue I have with this song is the female part. Do not be angry with me but she ruins this entry. Jandová’s voice does not work well with the one of Bárta. However, the gloomy atmosphere of this song is so unique that I already can see the stage show in my mind’s eye. All in all “Hope Never Dies” is good enough for representing a country at ESC but it is not good enough  for winning this contest.
Points: 4/10

Olivia – The Journalist
Seemingly duo’s are the in thing this year. But sadly for Czech Republic, this pairing is among the weakest. It’s great to have them back, but frankly their return has added little into the musical mix. The song takes far too long to grow and sounds like something more suited for a musical. It’s a shame the instrumental part wasn’t used further, as half way through the musical break is much welcomed. This song will struggle to climb the greasy, glitter pole.
Points: 4/10

Katja – The Schlager Queen
Welcome back! You picked two of your most famous singers and two very good live performers and I salute you for that. But unfortunately, I do think the song is a bit of a letdown. It is very anthemic in the best Never Forget (Iceland 2012) sense, but the production is not on patch. I still hope you manage to squeeze through to the Final as I think we’re in for a threat when it comes to the live performance.
Points: 6/10

Arie – The Professional Musician
The funny thing is that I really thought I was going to love this one.  It has a sort of contemporary musical theatre ballad quality that I like, but fails to deliver in the end.  While the harmonies are pretty (as most harmonies tend to be), the melody goes absolutely nowhere, which is exactly where the lyrics are hanging out as well.  When using dramatic words without any kind of grand thesis or ideas, the results are almost always MELOdramatic.
Points: 6/10

Mike – The Smart One
This is the only recent Czech song I have liked. I found the previous two entries to be among the most annoying ESC songs of the 2000s. From the country of Dvorak the Czech songs have been huge disappointments until now. This song has a very nice upbeat melody that fits the lyrics. Expected modulation near end works well. Best parts are the contrast between raspiness of the male lead and lyricism of the female lead and the unusual way the duo begins in an octave unison that goes to pure unison that then weaves between pure unison and close triadic harmony.
Points: 7/10

Anselm – The Alternative Guy
I was really delighted with the announcement of Czech Republic’s return to the contest (after all I loved 2 of their previous entries). The artist announcement filled me with even more excitement – I’ve known Marta Jandová for years so it was great to see Czech Republic re-entering Eurovision with a fairly big name. The song announcement, however, was a slight letdown. “Hope Never Dies” is definitely a decent piece of music but it isn’t special or daring in any way – something I wouldn’t have expected from two artists like these. But hey, it’s a good effort and I really hope they’ll make it to the final this year!
Points: 6/10

So here it is, the panel’s first score. It may not be something to brag about but I suppose it could be worse. The overall impression was quite similar among the six panelists but do you agree with them?

We’ll be back soon with the next review. In the meantime, make sure to join the conversation on the Forum HERE