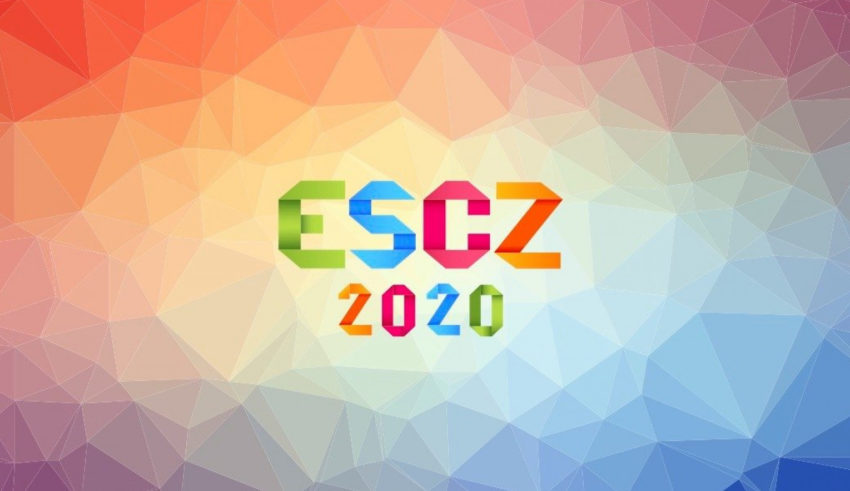 Yesterday, our team took a look at four of the entries from this year’s Czech selection. And now – guess what – we’re ready to see what the staff of ESC United thought of the final three tracks from ESCZ 2020!

As previous, our panel consists of Boris, Daniel, James, Melanie, Roy, Sean and Stefan. Let’s see who comes out on top after these reviews…

Boris – 10 – “The easiest 10 I’ve ever given in my life. “White & Black Holes” is an utterly mesmerising, ambient piece which immerses you less than one second into the performance. It is completely void of flaws. Compositions such as these make life worth living and that the Czech can even flaunt this around the Dullmarks, Noways and Bleghstonia’s of this NF season – knowing full well they won’t pick W&BH – only speaks for overall quality of this glorious national final.”

Daniel – 10 – “Last year Barbora was my favorite (even though I eventually learned to love Lake Malawi a lot). And just like last year this song delivers equal parts of mystery, intrigue and a haunting Lana Del Rey-esque voice. As opposed to last year, I think this song is even more mature and dynamic than last year which make her an absolute favorite in my book. Barbora just knows how to provide quality with an instrumentation that complements her voice, and I cannot wait for her to hit those whaling notes so that I can feel every hair on my body.”

James – 8 – “This makes Lana del Rey sound like Slayer. It’s that slow. Perhaps like del Rey, they could get a great DJ to put a decent dance track on top of it to inject some life into it. That’s probably what I would have said a few years ago when I was less receptive to ambient pieces such as this. There’s a neat, simple piano riff that underlines the dreamlike chorus, picking you up as you drift along in the dreamlike state the song lulls you into. And it’s easy to overlook the high notes on the outro that Barbora hits as she and the listener succumbs to the gloom. It’s hard to describe this. It’s hard to rate it. It’s probably going to be even harder to stage it. Just enjoy your three minutes stroll around the black and white holes.”

Melanie – 9 – “I remember I was so sad last year that Lake Malawi was sent to Tel Aviv instead of Barbora Mochowa. Now she’s back with an even better song! “White & Black Holes” is a song that fits perfectly in my Spotify playlist and is a song that I would also listen outside the Eurovision Song Contest. Mochowa is bringing us a dreamy alternative/indie pop song that automatically will be compared with Lana del Rey. It has such a cinematic sound to it and takes the listener on an artistic journey. She’s my pick for Rotterdam and if she can bring that cinematic atmosphere to the stage, maybe she can win it all an bring us to Prague in 2021.”

Roy – 7 – “She is back and the Czech Lana Del Rey is delivering a piece that is miles better than what she gave us last year. It is drowning in mystique and it could make for a very good and atmospheric staging. If Barbora can capture the fans in the first half of the song than this could really work well for the Czech’s. It just really sucks that it takes just under 2 minutes to finally get somewhere. I would have personally shortened that by about 20 seconds so that they could have an even grander ending where they can bring in the instrumentations even more. Still it is a great ambient piece. It would be a risk to send this, but I would love to see how it would fare in the contest.”

Sean – 10 – “Utter perfection. My first 10 of the year goes to Barbora Mochowa, who deserved major praise for her similarly great effort “True Colors” last year. She has somehow elevated her game this year, bringing a wonderfully quirky, often ambient piece with a rich and vibrant production and a soaring structure, culminating in THAT note. This just oozes quality from every pore. Sadly, I can’t see this striking a chord with the majority of Eurovision fans and I fear a Conan Osíris/Norma John/Claudia Pascoal case of true quality being grossly underrated if this makes it to Rotterdam…”

Stefan – 5 – “It gives me Lana del Rey vibes. I kinda like the dark and mesmerising tones, but the biggest con is the monotonous rhythm. Unfortunately, while I finished listening to the rest of the national final entries, I forgot about this one.”

Boris – 4 – “As one could have expected, Duncan’s win opened all the registers towards “Emotional Men With Piano Ballads” and *sigh*. Look, I have heard and seen worse, but the Czech have much better music on sale this year to not go for this eye-rollingly typical option.”

Daniel – 6 – “A highly personal song that builds over time to become a powerful pop power ballad. While the song itself is a beautiful piece, I feel it may seem somewhat simple for what the Czech Republic has been sending as of late. One minor critique I have is that the chorus “At least we’ve tried” breaks the rhythm and progression of the song rather than soothes it. Other than those comments, I think this is a perfectly good ballad that may do well in CZ 2020.”

James – 3 – “A joyless dirge of a breakup song. I am not sure what weighs this song down – his reedy voice or the cliché lyrics (“this ain’t my home without you!”, “bed smells like you!”). He’s got a voice more suited to something more up tempo, and at the very least he’s willing to let the object of his affection go unlike a lot of “nice guy” indie we’re seeing pop up at several national selections this year. But no, I don’t really want to listen to insincere assembled clichés masquerading as heartache at Eurovision.”

Melanie – 7 – “Karelll is keeping it simple with his song “At Least We’ve Tried.” It’s a great ballad with a superb composition. You can really feel his emotions when he sings. I only think that the songs of Olga and Barbora are more unique than his song. Nevertheless a good song from Karelll.”

Roy – 5 – “Karelll did try and he didn’t do bad at all coming up with this song. The unfortunate thing is that he is facing some very tough competition. I also feel like Karelll would have really benefited from a live final. He has a great voice that probably comes alive even more in live-performances. Unfortunate for him they scrapped the intentions for a live final. In any other selection this would rank in my top 5 and I would have graded it around a 7 or 8, but I am rating these comparatively in their own selections and without a live performance I think this is the 2nd least interesting song of the bunch… I do desperately hope Karelll tries again in the future when the Czechs can solidify their plans for a live final!”

Sean – 6 – “As piano ballads go in Eurovision, this is a very good, high-quality example of one. It has a great tempo and build, a strong sincerity in Karelll’s vocals and some interesting sonic moments that separate this from a lot of other examples of the genre. It perhaps could use a bit more of a boost in the final parts of the song to elevate it further, but this certainly is a song I wouldn’t mind listening to again and again.”

Pam Rabbit – Get Up

Boris – 9 – “Yesss, a heavily percussive empowerment anthem that promises a quirky kickass spectacle if it ever reaches an ESC stage (and it might!). GIMME.”

Daniel – 7 – “What a funky song, and I say that with all the joy in the world. The intro is very intriguing and really draws you in with all the random sounds in the background. Pam has a great sultry voice that balances the cuckoo nature of the instrumentation. The song is definitely a continuation of the more urban sounds that were popularized by Mikolas Josef. This song ticks off many of the boxes, coherent, fun and stage-ready.”

James – 7 – “Electronic pop singer Pam Rabbit is back, and again it’s an intriguing and different entry. The rap vocals at the bridge are a cute touch, though sonically this song is in an interesting place as its tempo may throw people off (too much shifting for some, too slow for others). This would be an interesting pick and would be in keeping with Czech Republic’s trendy entries of the past couple years.”

Melanie – 6 – “Pam is bringing us attitude in her song Get Up! I love the refrain, but the chorus reminds me a bit of “Walking Out” from Srbuk. I really like Pam’s style, but I’m having the feeling that this is just the start of what she can bring. She has so much potential, but I don’t see it shining in this song. So I hope she will back next year with a song that really let her potential show.”

Roy – 9 – “I was already intrigued by Pam last year and hoped to hear more from her. And here she comes with a piece that is a whole lot more complete and pleases my music sense in a lot of ways. Her voice is sooooo good, It is so many things at the same time. It is mysterious, playful, powerful and laid-back at the same time. Then the orchestration is everything that I love in some of my favourite music. The haunted feeling and sounds of a mental asylum combined with the distorted chorus that feel like you get torn open give this song so many dimensions and directions. So much is happening in this song and I love every little aspect of it. I am only afraid on how everyone else would receive this song and I fear that it may disappoint in the contest… A bummer because this is one of my favourite songs of national final season so far!”

Sean – 7 – “Billie Eilish meets Grimes meets BANKS meets the recently-eliminated JÆGER from this year’s Norwegian selection, blended with a sometimes simplistic electro-pop track. It’s certainly something different to the endless guitar ballads and safe pop songs that saturate most national selections. I feel it could be a little stronger or more daring though, I feel a little underwhelmed despite all of the potential on show here.”

Stefan – 3 – “I barely managed to listen the whole song and it’s not even the full 3 mins. Definitely not my cup of tea. It’s all over the place, both the song and the video. Worst song of Czech national final in my opinion.”

So, how do these three entries compare to the rest, and who did we put on top in the Czech selection?

In an incredibly high-scoring national selection, it is a clear decision – Barbora Mochowa is our team’s favourite, including an astonishing three awards of 10/10! But will the wider Eurovision fanbase agree?

What do #YOU think of the Czech selection? Do #YOU agree with our thoughts on the finalists? Share your thoughts with us on our forum HERE or join the discussion below and on social media!