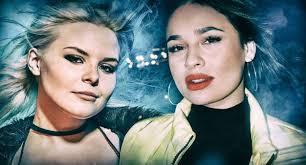 Norddeutscher Rundfunk (NDR) announced today that a seventh act will be joining the six already announced entrants to compete for Unser Lied für Israel. NDR also listed the song titles of the seven acts performing on the live show on February 22, 2019.

Sisters, performing the song “Sister”, is an act fronted by Carlotta Truman and Laurita Kastel. Both acts will be familiar to German song contest fans as both Carlotta, age 19, and Laura, age 26, were finalists and winners in many contests; from Kiddy Contest to Das Supertalent and The Voice Kids. Truman also formed and is frontwoman for indie-rock band Carlotta and the Truman Show, and also won Best Singer in the junior selection at the German Rock and Pop Awards in 2011.

The seven finalists, and their songs, are as follows: As with the previously announced six entrants, “Sister” was written at the five-day NDR songwriting camp which took place last year, where 24 national and international songwriters, composers and producers collaborated on material especially for the seven finalists.

Germany will be hoping to top the 4th place of 2018 entrant Michael Schulte’s “You Let Me Walk Alone,” which finished top of Unser Lied für Lissabon. With a similar format, there is hope that the resulting winner of Unser Lied für Israel will be of similar quality or better.

What do #YOU think of the participants announced so far for the selection? Share your thoughts with us on our forum HERE or join the discussion below and on social media!