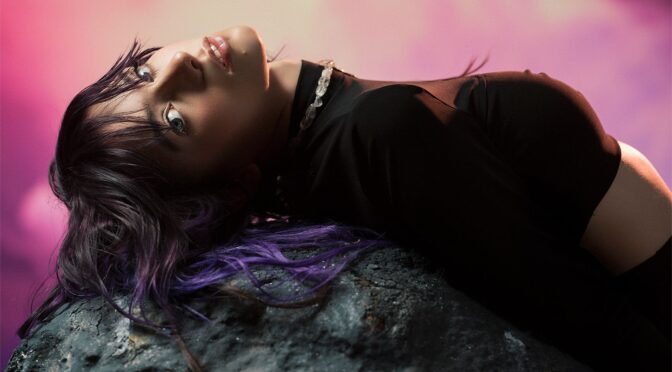 Next up, we take a look at the mysterious but talented singer Roxen, whose strong aesthetic, alternative style and deep house roots make her one of the rising stars of her home country…

One of the youngest stars of this year’s contest and a rising talent in her home country, Larisa Roxana Giurgiu was born in Cluj-Napoca a few days into the millennium on 5th January 2000. From an early age, she showed an interest in music and performing, taking up singing lessons and piano as a child. In an interview in 2020 with Romanian news outlet a1.ro, Roxen shared her upbringing; “As a child, I participated in various competitions and festivals, but I always wanted to make music at the highest level and I dreamed of singing on big stages and addressing the public.

Having worked on her musicality during her upbringing, Roxen became the winner at the age of 18 of the “National Student Festival of Light Music: Musical Harmonies” festival in Târgu-Mureș, a competition open to rising musical talent between the ages of 18 and 35.

Roxen became professionally known in Romania in 2019 when she featured on the Sickotoy song “You Don’t Love Me” in August, which featured extensively in Romanian radio and achieved commercial success, earning a third place position on the Airplay 100 chart. The song also received playlist status on radio stations in France, USA, Russia and Spain.

Roxen’s debut single, released as part of her deal with Global Records, was “Ce-ți cântă dragostea” in November 2019, which went to number one in Romania. Roxen was beginning to make a name for herself as an accomplished performer and vocalist in the deep house genre, with various media outlets comparing her to Billie Eilish or Dua Lipa.

How did Roxen get to Rotterdam?

For Eurovision 2020, Romania’s national broadcaster TVR struck an agreement with Global Records to help select the Romanian artist for the contest. From a shortlist of artists and strong consideration for many artists on the record label’s roster, Roxen was chosen and revealed as the Romanian representative on 11th February ahead of Cezar Gună and Diana V.

It was confirmed after Roxen’s internal selection that the long-running Romanian national final Selecția Națională would select the singer’s song for Rotterdam. Five songs were revealed on 21st February; “Beautiful Disaster”, “Cherry Red”, “Colors”, “Storm” and “Alcohol You”. The latter song was chosen in the final on 1st March 2020, with both the jury and televote agreeing it was the best of the selection.

After the song’s selection, Roxen set out on an extensive promotional tour of Romania, performing the Eurovision entry (and occasionally some of the candidate songs) in various media, radio appearances and interviews.

On 18th March 2020, the sad news we are all familiar with came; Eurovision was cancelled. While TVR was one of the first broadcasters to consider keeping the song for next year before the EBU ruled this possibility out, Roxen was quickly re-installed as the Romanian representative at Eurovision for 2021.

In January 2021, Roxen shared with her Instagram followers that a national selection for the Romanian entry would not be necessary, as her team and TVR had found “the perfect entry” for Eurovision. Eventually, it was confirmed that Roxen would sing “Amnesia”, recorded after a successful demo recording session in February, with the song released officially to the public on 4th March.

How has Roxen been preparing for Eurovision since selection?

Since her 2020 selection, Roxen has been using the time to enhance her profile both domestically and abroad. In June 2020, her strong image was a driving force behind being revealed as a brand ambassador for hair dye product Loncolor Expert HEMPstyle, featuring in commercials and promotional images for the product.

In October 2020, Roxen scored her second Romanian number one single with “Spune-mi” and the following month she teamed up with Eurovision veteran Alexander Rybak for the song “Wonderland”, breaking the 1 million mark for YouTube hits.

Following the announcement of her 2021 entry, she shared the meaning of “Amnesia” with Eurovision.tv; “The last year was a bit of a rollercoaster, filled with really good moments and some low points also. In the end, what kept me going the most was that I had some really great projects. Amnesia somehow manages to give a voice to all repressed feelings and to the people whose voices haven’t been heard, in a way that for me is incredibly pure.”

Romania’s Roxen will perform “Amnesia” in the first semi-final of Eurovision 2021 on May 18th, performing thirteenth on the night.

What do #YOU think of Romania’s entry for 2021? Share your thoughts on this article in the comments below, on our forum HERE and on social media!