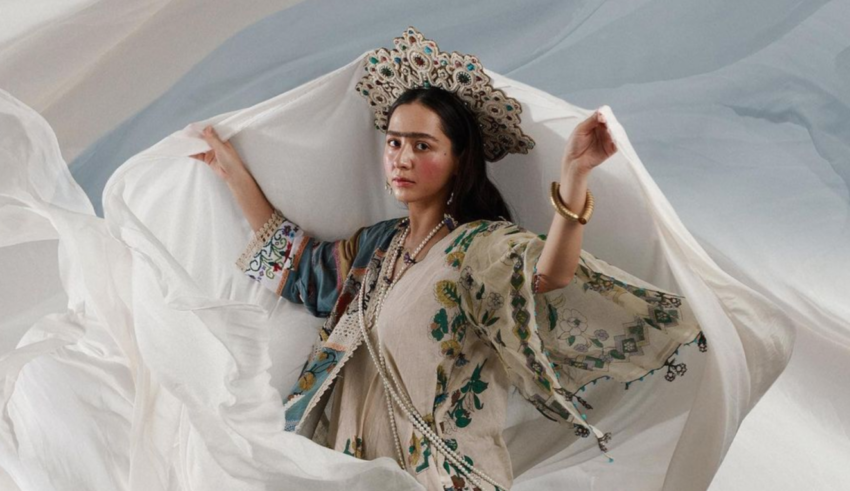 Today we take a look at the journey of Manizha, a Tajik-born singer who has turned heads and raised eyebrows on her way to Rotterdam with her powerful positive messages, defiance and no-nonsense attitude…

Born in Dushanbe, now the capital of Tajikistan, on 8th July 1991, Manizha Dalerova Sangin’s roots have always been laid bare for people to see, and the Russian-Tajik singer has worked tirelessly throughout her career to defend her roots, even from a young age – her father did not believe a singing career was a suitable career path for a Muslim woman.

Her great grandmother was a huge source of inspiration for Manizha, as one of the first women in Tajikistan to remove her veil and say that she would work, fuelling Manizha’s family background of strong woman figures.

Early on in her life, her parents departed Dushanbe for Moscow to provide a better opportunity for her and her siblings, and to escape the civil war in Tajikistan in 1994. While in Moscow, Manizha enrolled in a music school to study piano, eventually leaving to focus on singing and to train with private vocal coaches.

Her singing career began in 2003 when she performed as a child singer performing in various competitions in the region, winning a competition called Grand Prix of the Rainbow Stars in Jūrmala, Latvia, becoming a laureate at the Kaunas Talent competition in Lithuania and becoming a finalist of the Five Stars competition in Sochi, Russia in 2007.

She eventually enrolled in the Russian State University for the Humanities to study psychology where she also took part in singing events and worked in studios in the evenings to create and write music.

Manizha was a member of various performance groups in Russia, namely Ru.Kola, Assai and Krip De Shin, spreading her time between Moscow and St. Petersburg, before eventually moving to London in the United Kingdom to study gospel. She spent much of the next few years between Moscow, London and New York, and began to forge a career as a solo singer, developing an audience on Instagram with covers and beginning to release some independent singles from 2016.

Manizha released her debut album, “Manuscript” in February 2017, followed by another album, “ЯIAM” in 2018.

Known for being socially conscious in Russia and beyond, Manizha is a strong supporter of various charitable causes, particularly for children. She is a strong advocate for female empowerment and against media beauty ideals, inviting concert-goers at her performance at Chateau de Fantomas in Moscow to join her in wiping away their make up in 2018.

She also launched a campaign against domestic violence in 2019, releasing an app called “Silsila” to help victims of violence to reach help quickly, and is an active supporter and ally of the LGBT+ movement in Russia, performing at pride events in St. Petersburg and covering Cher’s “Believe” for online LGBT+ magazine “Otkritiye” during Pride Month – an act which Manizha said lost her thousands of Instagram followers.

How did Manizha get to Rotterdam?

Following intense speculation around the identity of the Russian artist for Eurovision 2021, with many expecting the return of Little Big to be announced – Russia’s broadcaster for this year’s contest, Channel One, announced an 11th-hour national selection “Evrovidenie 2021 – Nationalnyy Otbor” to be held on 8th March 2021.

Manizha was announced as one of the three acts competing in the selection, alongside indie/electropop band Therr Maitz and duo #2Mashi. Manizha won the competition with 39.7% of the public vote for her entry “Russkaya Zhenshchina” (the title was quickly translated to “Russian Woman” once Manizha was selected).

Describing the meaning behind the song, Manizha told Eurovision.tv that it is about “the transformation of a woman’s self-awareness over the past few centuries in Russia. A Russian woman has gone an amazing way from a peasant hut to the right to elect and be elected (one of the first in the world), from factory workshops to space flights. She has never been afraid to resist stereotypes and take responsibilities.” The song features many traditional sounds and is the first entry to extensively feature Russian for the country at Eurovision since 2009’s home entry “Mamo”.

How has Manizha been preparing for Eurovision since selection?

By batting away a lot of criticism, unfortunately. Manizha’s selection as the Russian performer saw a lot of opposition in Russia, with many taking offense to a singer of Tajik origin representing the country and Manizha’s activism for LGBT+ rights and female empowerment. In fact, culture deputy Elena Drapeko demanded that Manizha not be allowed to perform under the Russian flag at Eurovision due to her values and the pro-LGBT+ perception of Eurovision.

Manizha’s selection as the Russian artist and the subsequent domestic backlash garnered a lot of international attention, with media outlets as far as the United Kingdom picking up on the ‘controversy’. “I won’t allow myself to be broken” Manizha told the British news outlet The Guardian in an interview on April 9th; “If I came apart right now because of the ‘haters’, started crying, started saying ‘oh my God’, then I would prove all of their words to be true.”

As part of the promotional trail for Eurovision, Manizha made a number of domestic interview appearances, including with Alena Blin, and featured in an Adidas Russia advertising campaign.

Russia’s Manizha will perform “Russian Woman” in the first semi-final of Eurovision 2021 on May 18th, performing as the third song of the evening.

What do #YOU think of Russia’s entry for 2021? Share your thoughts on this article in the comments below, on our forum HERE and on social media!