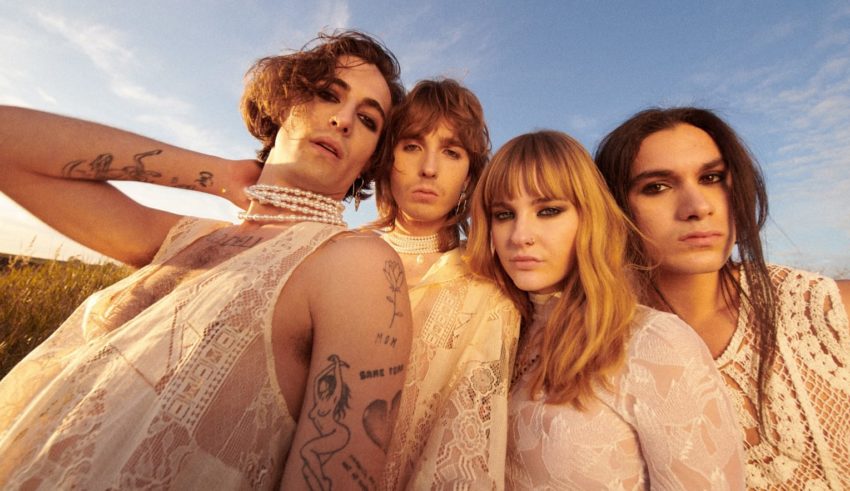 Today, we take our first look at an artist new to the contest in 2021. They’re no strangers to the music scene though… take a look as we profile one of Italy’s hottest bands right now – Måneskin!

After the group’s members first met at high school in Italy, they decided to start a band while attending the Kennedy high school in Monteverde in 2016. They entered Pulse, a local music contest for rising talent and emerging bands, where the name of the group was decided; Måneskin (Danish for moonlight) was chosen after the band asked half-Danish Victoria to throw some words out there to try as a band name. The contest itself led to the group needing to write original material, and they eventually won the competition.

The group honed their craft, practicing for hours a day with each other and performing as buskers on the streets of Rome, before they made their transformative step by auditioning for Italy’s version of The X Factor in 2017. The group passed through the bootcamp and Judges Houses stage in Manchester to reach the live shows of the competition, where they wowed the Italian voters with their rock covers and confident, charismatic performances, regularly winning the public vote week after week.

The band eventually finished second to Lorenzo Licitra, with their self-penned track “Chosen” performed in the final and serving as the group’s first official single. “Chosen” went to number two in the Italian charts, with the EP of the same name reaching number three in the album chart.

Måneskin followed up the success of their first track with their first Italian language single, “Morirò da re”, which also earned number two in the charts in 2018. The band topped the Italian charts later that year with “Torna a casa” and racked up over 100 million views for its music video (below), with three more of their tracks reaching the top 10 on the charts since. Late 2018 also saw the release of This Is Måneskin, a documentary film about the band’s rise to success.

How did Måneskin get to Rotterdam?

Like all of Italy’s recent hopefuls in the Eurovision Song Contest, Måneskin had to go through the Sanremo Festival process, taking part in one of the most prestigious music festivals in the world.

The group won the competition on their first try, taking part in Sanremo 2021 with “Zitti e buoni”, a fast-packed, snarling punk rock track. The group was ranked 8th by the demiscopic jury on the first night, eventually falling as far as 15th in the overall ranking once all ‘Big Artists’ performed once.

On the third night of the festival, the group performed with their X Factor mentor Manuel Agnelli, covering “Amandoti” by CCCP Fideli alla Linea. The Sanremo jury awarded them 6th place on the night for their performance, with their second performance of “Zitti e buoni” on the following night earning 2nd place with the Press Jury and slowly moving the group up the overall rankings of the festival.

The group earned 13.02% of the first televote on the final night, enough to place them second overall once all of the juries and televote were combined. A second vote was held between the band, Francesca Michielin & Fedez and Ermal Meta. In the end, Måneskin won the Press Jury and smashed the televote to be awarded the Sanremo crown in front of a TV audience of over 7 million Italians. It was confirmed within the next day that the group would indeed represent Italy at Eurovision 2021, having won first refusal at the Italian festival.

How have Måneskin been preparing for Eurovision since selection?

Shortly after their Sanremo victory, the band released their latest studio album “Teatro d’ira – Vol. I” on March 16th, which earned a gold classification in Italy and went straight to number one on the Italian album charts and peaked at #13 on the Swiss album rankings.

On the same day, Måneskin released the Eurovision version of their entry, cutting the song down to the three minute limit and also removing some of the bad language featured in the original song.

The band also announced that they would be performing at four shows towards the end of 2021, performing at Rome’s Palazzo dello Sport on December 14th and 15th, and Milan’s Mediolanum Forum on December 18th and 19th. The band are then set to go on tour across Italy in March and April 2022.

Italy’s Maneskin will perform “Zitti e buoni” at the final of Eurovision 2021 on May 22nd as one of the members of the Big 5.

What do #YOU think of Italy’s entry for 2021? Share your thoughts on this article in the comments below, on our forum HERE and on social media!