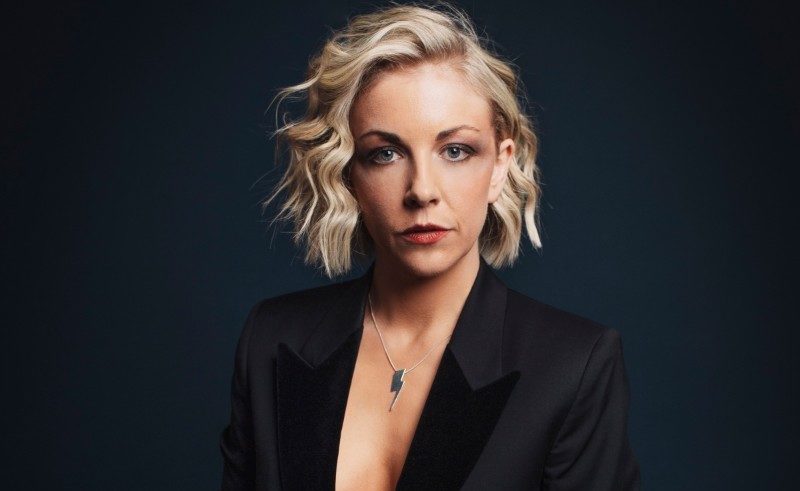 Splitting her time between her native Ireland and the United States, Lesley Roy has spent her career perfecting a pop rock sound and writing for some of the world’s most talented singers. But when Eurovision came calling, the “Maps” guided her back home…

Who is Lesley Roy?

Born in Balbriggan, a town to the north of the Irish capital Dublin, on 17th September 1986, music was always a passion for a young Lesley, and the Eurovision dream was alive from a young age; “Growing up in Ireland, obviously the Contest holds a special place in my heart, as it does for many people. It was a very big event in my house every year, we watched and voted on each act and I became a massive fan at a very young age. I’m very lucky that I am from the era of Niamh Kavanagh, Paul Harrington, Eimear Quinn and Riverdance.”

Lesley’s mother was heavily involved in music, having appeared in various bands and regularly playing records around the family home as Lesley was growing up, passing the ‘bug’ on. Lesley received her first guitar at around the age of ten and begun to write her own songs, heavily influenced by the pop rock artists of time such as Avril Lavigne.

At the age of 15, Lesley Roy began to record demos of her own material with local producer Rory O’Connor, and her music career kicked off as she signed with the independent label Religion Music in Ireland in 2006, but it was Stateside that she would begun to really experience success, signing with the US label Jive Records shortly after being noticed by the label’s A&R Jeff Foster. The two labels jointly funded Lesley’s debut (and to this day only) album “Unbeautiful” which was released in 2008.

The album sold 45,000 copies and was downloaded 350,000 times, peaking at #5 on the Billboard’s Top Heatseekers Chart. The lead single from the album, “I’m Gone, I’m Going” was a minor radio hit in the US, charting on the Hot Adult Top 40 and Pop 100 Airplay charts and being utilised as the theme tune of MTV’s show “Exiled”. It was also featured on an episode of the popular US reality series “The Hills”.

A number of the other singles achieved notability in US radio airplay, including a track called “Slow Goodbye” which was co-written with Katy Perry. Credits with Max Martin, Dr. Luke, Savan Kotecha and Andreas Carlsson could also be found on the album.

In 2010, Lesley Roy married her American wife, and she continued to split her time between the US and Ireland. Having had a deal for more album releases pulled, Roy became known as a songwriter, featuring on some songs of Miss Montreal’s “I Am Hunter” and Adam Lambert’s “Trespassing”, as well as the single “Waiting for Love” by Danish singer Medina.

Lesley began releasing her own music once more in 2016, with a trio of singles; “Hang On”, “Blood on Your Hands” and “Free the Flame (Ember Moon)”, the latter of which is used as the ring walk music for the wrestler Ember Moon.

How did Lesley get to Rotterdam?

On 26th September 2019, the Irish national broadcaster RTÉ opened a submission period for entries for Eurovision 2020, requesting songs from “artists and composers with a proven track record of success in the music industry”.

On 5th March 2020, it was confirmed during the RTÉ 2FM breakfast show that Lesley Roy had been internally selected to represent Ireland at that year’s Eurovision Song Contest, with her upbeat pop-rock entry “Story of My Life” released later that day. The song was co-written with Catt Gravitt, Robert Marvin and Tom Shapiro.

Lesley first performed the song live the next day, during “The Late Late Show”, but it would sadly be consigned to history just two weeks later as the contest was cancelled due to the spread of COVID-19 in Europe and globally.

Lesley would need to wait until 17th December 2020 until she was confirmed as the Irish representative once more in Eurovision, internally selected by RTÉ to work on an entry for the Rotterdam contest. With Roy teasing a number of clues to the entry throughout February, the song “Maps” was finally released on 26th February, written by a multi-national line-up of Lukas Hällgren, Philip Strand, Normandie, Deepend and Emelie Eriksson.

How has Lesley been preparing for Eurovision since selection?

Throughout her two Eurovision campaigns, Lesley has been active on social media and has engaged strongly with her fanbase, endearing her to many in the community. Sharing her thoughts on returning to Eurovision with The Late Late Show, she cited the positive reception to her 2020 entry and the lyrical content with finding the strength to go through the process and represent Ireland at Eurovision again.

On February 28th, Lesley shared the behind the scenes footage from the production of the “Maps” music video with her Instagram followers, with a further update on March 5th that she had reached #3 in the Irish Homegrown Music charts.

She appeared in Irish celebrity magazine VIP Magazine in early April to discuss Eurovision and mental health among other topics, and hosted the breakfast show Ireland AM on the radio station Virgin Media One on April 11th. Lesley continued to feature in Irish broadcast and print media in the build up to the contest, including the Irish Independent.

On April 22nd, Lesley went live with the United Kingdom’s entrant James Newman on Instagram for a Q&A session, two days ahead of performing an acoustic version of “Maps” in a mini concert at the Eurovision Spain PreParty. She also performed at Hrvatski ESC Klub’s Adriatic Pre Party on 1st May ahead of her final media appearances, before jetting off to Rotterdam on May 7th.

Ireland’s Lesley Roy will perform “Maps” in the first semi-final of Eurovision 2021 on May 18th, performing ninth on the night.

What do #YOU think of Ireland’s entry for 2021? Share your thoughts on this article in the comments below, on our forum HERE and on social media!