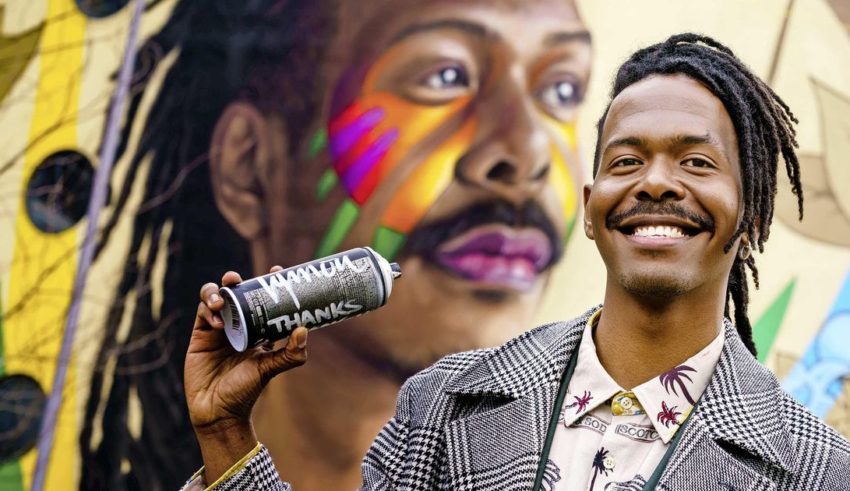 We’ve made it! We’ve reached the final stop of our Road to Rotterdam, leading us to the Netherlands ahead of tonight’s Eurovision grand final!

Let’s take a look at this year’s home favourite, and Jeangu has certainly had a long journey to get to this point…

Jeangu Macrooy is a soul singer-songwriter from Suriname in South America. Born on 6th November 1993 alongside his twin brother Xillan in the Surinamese capital of Paramaribo, his musical journey began as a teenager when he received a guitar from his parents for his thirteenth birthday. He formed a band with his twin brother called “Between Towers” in 2011. The duo released their only album in the band, “Stars on My Radio” in 2013.

Jeangu studied at the Conservatory of Suriname in Paramaribo for two years, before he moved to the Netherlands at the age of 20 to study at the ArtEZ Conservatory in the eastern city of Enschede, specialising in songwriting. While in Enschede, he formed a working relationship with producer Perquisite, who signed him to the label “Unexpected Records” and became his manager.

Jeangu released his debut EP “Brave Enough” through the label in 2016 and was shortly thereafter named the “3FM Talent”, going on to provide support for shows by Blaudzun and Selah Sue.

Macrooy’s debut album followed shortly after, with “High on You” being released in 2017. Unexpected Records describe the album as a collection of “highly personal songs” depicting “honest stories of struggle, gratitude, hope and leaps of faith that come with navigating young adulthood in different contexts”. The album was nominated for the Edison Pop Award for “Best Album” and the lead single “High on You” stayed at number one for seven weeks on the Surinamese charts.

His releases and growing profile both back at home in Suriname and in his new home of the Netherlands saw Jeangu invited to perform at various festivals, including “Lowlands Festival”, “North Sea Jazz” and “Eurosonic Noorderslag”, and he also nailed down a regular slot as a performer on the Dutch talk show “De Wereld Draait Door”.

Jeangu released his second album “Horizon” in 2019, marking a change in direction for the singer; “As soon as I recognized certain pre-existing patterns in my song writing, I stopped and tried to figure out whether there were alternative ways of going about it.” Following the release he toured in Germany, with headline appearances in Cologne, Berlin and Hamburg, performing in the world famous Reeperbahn in the latter.

How did Jeangu get to Rotterdam?

Dutch broadcaster AVROTROS once again opted for an internal selection to select the host entry for the 2020 contest, and on 10th January 2020 the broadcaster announced that they had internally selected Jeangu Macrooy to represent the Netherlands on home soil, becoming the third artist from Suriname to represent the Netherlands after Humphrey Campbell (1992) and Ruth Jacott (1993).

The entry for the 2020 contest, “Grow”, was released on 4th March 2020, telling the story of Jeangu getting older and finding himself. “Emotions, good and bad, are a universal language. I hope this song makes people feel a little less lonely in their search for happiness. I think that openness and honesty about how we really feel will ultimately bring us closer.”

Unfortunately, Jeangu would not get the opportunity to perform “Grow” for the home nation at the contest, as the contest would be cancelled by the COVID-19 pandemic on March 18th, and the Ahoy Arena in Rotterdam was subsequently handed over to the Dutch government to be used as a field hospital for patients suffering from the disease.

On the same day, the broadcaster AVROTROS committed to sending Jeangu Macrooy to the contest once again, and work began on a follow up entry for the 2021 contest. The new entry, “Birth of a New Age”, was finally revealed on 4th March 2021, in a special live broadcast from the broadcaster. The following day, the official video was released, filmed in the Rijksmuseum, Tropenmuseum and Koepelkerk, all in Amsterdam.

The song marks the first instance of the Sranan Tongo language appearing on the Eurovision stage, with much of the lyrical content of the song stemming from a poem Jeangu wrote in 2020 following the upsurge in Black Lives Matter movements worldwide starting last summer.

How has Jeangu been preparing for Eurovision since selection?

The song went to the top of the NPO Radio TOPSONG charts upon release, and Jeangu appeared as a guest on Matthijs Gaat Door, a music and chat show in the Netherlands, on March 20th with the Sven Hammond big band.

Being based in the host country, Jeangu’s preparation was perhaps more based around the contest’s hosting itself than other artists. He was pictured outside the Ahoy in early April as the countdown clock to the Eurovision final ticked past the 50 day mark. A commemorative €0 note was released depicting Jeangu on March 16th and was available to purchase from the Unexpected Records web shop.

A mural of Jeangu was unveiled in April to celebrate the artist’s participation in Eurovision 2021. The mural can be found across the street from the Ahoy in Rotterdam and was created by the visual artist Tymon de Laat as part of the #UPStreetRotterdam art project in the city. Jeangu also made the cover of Volkskrant magazine, discussing the contest and his participation in early May.

Jeangu recorded a session with Concertgebouw in April, released on the 15th.

On May 10th, Jeangu revealed that his backing vocalist for the performance of “Birth of a New Age” would be A Mili and his twin brother Xillian.

Netherlands’ Jeangu Macrooy will perform “Birth of a New Age” at tonight’s Eurovision 2021 final, performing 23rd on the night.

What do #YOU think of the Netherlands’ entry for 2021? Share your thoughts on this article in the comments below, on our forum HERE and on social media!