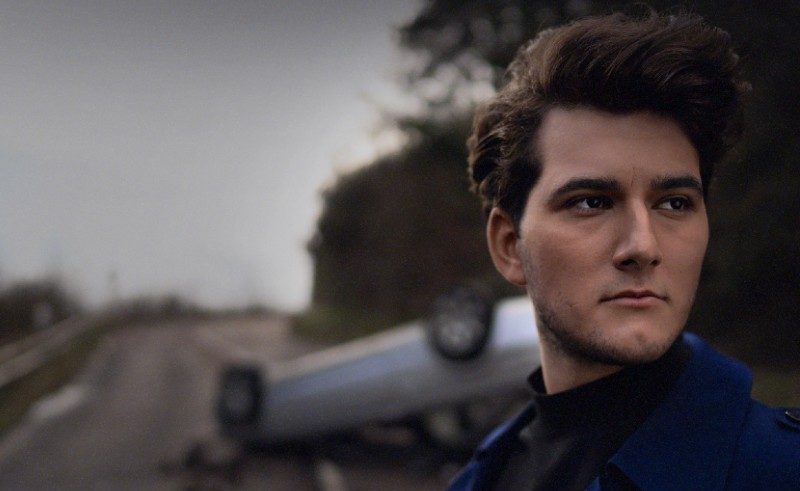 Today, we profile the journey of Gjon’s Tears, from childhood performer in Albanian and Swiss talent shows to one of the most hotly-tipped contestants in this year’s contest…

Gjon’s Tears is the stage name of 22 year old singer Gjon Muharremaj, who was born in the canton of Broc in Gruyère, Switzerland. He is of Albanian heritage, with a Kosovo Albanian father and a mother from Tirana. Gjon gets his stage name from the emotion he evokes in people, most particularly in his grandfather who was moved to tears by his performance of Elvis Presley’s “Can’t Help Falling in Love” at the age of 9. “Whether it’s joy, sadness or melancholy – I want to touch people with my music in every possible way.”

Gjon has belied his young age by already impressing as a young performer in various talent shows across the continent, first making an impact in Albania’s local version of the Got Talent franchise in 2011 at the age of 12, after his grandfather signed him up at the last minute. After finishing third, Gjon turned his attention to the Swiss version of the show where he reached the semi-final stage of the competition.

Gjon’s biggest break came in 2019 when he was a participant in The Voice France and prompted all four judges to turn their chairs for his performance of Christine and The Queens’ “Christine”. He joined Mika’s team and proceeded all the way to the semi-final stage of the competition before being eliminated.

Gjon returned to perform in Albania in 2019, with a live performance of his debut single “Babi” at the final of Albania’s junior version of The Voice, and begun to truly embark on his career as a recording artist.

How did Gjon get to Rotterdam?

Gjon was initially selected internally for Eurovision 2020 by the Swiss broadcaster SRF, having submitted an entry for the open call of songs. His song, “Répondez-moi”, was selected after deliberation from a 100-strong audience panel and a group of 20 music industry experts.

On the subject of his song, Gjon told Eurovision.tv “Everyone asks themselves why exactly are we here, where do we come from and where are we going. These are key questions, particularly for people from a migrant background. My parents are from Albania and Kosovo. I grew up in Switzerland and it’s my home, these are questions that I think about a lot.”

Gjon’s Tears had quickly established himself as a major favourite for the Eurovision 2020 title as Switzerland hoped to build on their strong showing at the Tel Aviv contest a year earlier. Unfortunately, as with many artists from last year’s selections, his hopes were temporarily dashed with the cancellation of Eurovision on March 18th.

Just two days later, the good news arrived – Gjon would represent Switzerland at the 2021 contest, and work begun right away on a follow-up entry. 20 songs were eventually written by Gjon and various Swiss and international composers, with the candidates put to two similar panels as in the 2020 selection.

In the end, “Tout l’Univers” was released to intense hype on 10th March 2021. Gjon’s latest message of the power of love resonated with many, with the singer stating at the time of release “I am so happy that I will finally be able to take part in Eurovision this year and that I can spread a positive message with my song. It was important for us to keep hope in this particularly difficult time: we must not give up and we must stay strong. With love, friendship, strength and courage, we can rebuild our future. I am convinced that in this exceptional situation it is possible to rediscover and reinvent ourselves.”

How has Gjon been preparing for Eurovision since his selection?

Gjon’s Tears’ 2021 entry made an instant impact, going to the top of the betting odds to win the whole contest and becoming the first song to break 1,000 points in our very own Forum Ranking Game. He has since earned over 100k points on the MyEurovisionScoreboard app and racked up 1.9m views on the official video for his song.

On 18th March, Gjon released some behind the scenes footage from filming of the music video for “Tout l’Univers” on his Instagram page.

Since the song’s reveal, Gjon has been hard at work promoting the entry, including the first live performance of the song in Madrid on March 22nd, as the song had been received particularly well in Spain and hit #1 on the iTunes chart there. Private Spanish channel Telencinco used the song to promote one of their documentaries and flew Gjon out to Madrid to perform it at their studios.

Gjon followed up his exploits in Spain with a streamed live performance on the Swiss platform Live It Live on March 26th, in the same week that it was revealed the Swiss delegation were working with Sacha Jean Baptiste on their staging for the contest.

Switzerland’s Gjon’s Tears will perform “Tout l’Univers” in the second semi-final of Eurovision 2021 on May 20th, performing sixteenth on the night.

What do #YOU think of Switzerland’s entry for 2021? Share your thoughts on this article in the comments below, on our forum HERE and on social media!