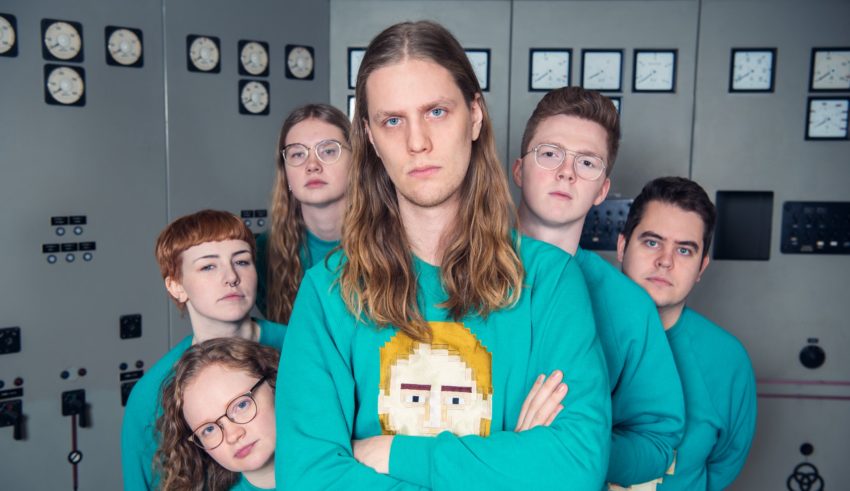 The next group took the world by storm in 2020 with their breakout hit “Think About Things”. A tough act to follow? Undoubtedly, but Daði og Gagnamagnið will be hoping to have struck gold a second time with their Eurovision 2021 entry…

Who are Daði og Gagnamagnið?

Just a little-known group from Iceland really, spearheaded by a creative mastermind.

The main focus is on Daði Freyr Pétursson, who was born in Reykjavik on 30th June 1992 but raised in Denmark and currently residing in Berlin, Germany. He spent the latter years of his childhood in Iceland, living in Laugaland and then Ásahreppur. Daði’s interest in music stemmed from his father, an educated musician, and he learned to play the drums when he was younger, before later moving on to piano and bass guitar. In an interview with DV in 2017, Freyr noted that “everything changed when I saw the movie School of Rock. I definitely saw it 100 times and formed by first band called “Finnski Herinn” (Finnish Army)”.

He graduated from the Fjölbrautaskóli Suðurlands college in 2012, while also having a short stint of playing basketball due to his considerable height of 2.08m; “I was a great basketball player. I would have been the best basketball player of all time if I had lasted the ball. It is a great loss for Icelandic basketball that I quit.” He jokingly mentioned in his 2017 interview.

He founded the band RetRoBot with his friend Kristján Pálmi and won the Músíktilraunir competition that year, a contest that also features Mínus, Of Monsters and Men and Sakaris in its roster of previous winners. Daði later earned a BA in Music Management and Audio Production in Berlin in 2017, and admitted that he had never been to Germany before deciding to move there for his studies.

Daði is a self-proclaimed big fan of Eurovision, and has produced a number of covers and DJ sets of Eurovision tracks over the years; “It’s a ‘solid’ party to meet your friends and watch the competition.”

The other members of Daði’s group for the contest, Gagnamagnið (literally “data plan”) include his wife Árný Fjóla Ásmundsdóttir (whose relationship with Daði forms the basis of their Eurovision 2021 entry), his sister Sigrún Birna Pétursdóttir and his friends Hulda Kristín Kolbrúnardóttir, Stefán Hannesson and Jóhann Sigurður Jóhannsson. Except Árný, the other members of Gagnamagnið are not music professionals but have joined Daði with many of his performances since first entering Söngvakeppnin in 2017. Daði and Árný have one daughter, Áróra, born in 2019, who was the subject of the lyrics of “Think About Things”.

How did they get to Rotterdam?

It was a long journey for Daði, but it is worth mentioning that the story may even have begun with his father, who was a bongo player for the group Katla Maria in the Icelandic selection for Eurovision 1993, finishing second last on the evening.

Daði first entered Söngvakeppnin in 2017 with “Is This Love?”, backed by Gagnamagnið but who were unnamed at the time. The electropop song about being awkward around the person who you have a crush on was an instant hit with voters, reaching the final of the contest and qualifying for the superfinal of the selection, before losing out to Svala’s “Paper”.

It would take another three years before the group returned to the Icelandic selection, entering the song “Gagnamagnið” in the 2020 contest. The song was initially written in English as “Think About Things”, and this version was used after the band qualified from the semi-final of the competition.

Or, at least, that was the plan. Obviously, COVID-19 had other ideas, and much with many of our #RoadToRotterdam stories, the contest was cancelled on March 18th. The song itself would take a life of its own without Eurovision however; the song was featured in a TikTok quarantine video that went viral, and started a trend on the app, with multiple celebrities and social media influencers sharing the song. Despite not having been performed at Eurovision, the song charted in Belgium, Ireland, Sweden and the United Kingdom due to its viral success, and earned silver certification in the latter country.

With many Eurovision fans concerned Iceland would not cancel their long-running national selection Söngvakeppnin and potentially risk the band not being chosen for the 2021 contest, Icelandic broadcaster RÚV finally confirmed on 23rd October 2020 that Daði og Gagnamagnið would indeed represent the Nordic nation in Rotterdam, with the song to be internally selected and revealed at a later date.

The song in question, “10 Years”, was finally released on 13th March 2021, depicting the relationship between Daði and his wife Árný.

How have they been preparing for Eurovision since selection?

Daði og Gagnamagnið have been busy with promotion during the lead-up to Rotterdam, with a lot of quirky branding and performances. The band got to work brewing a beer with the Borg Brugghús brewery in March, and the “10 Beers” cream ale was released just before the band flew to Rotterdam.

The official music video for the song, depicting a dance battle between a robot commandeered by the band and a giant monster threatening the people of Iceland, was released on March 29th. A dance tutorial video by Daði surfaced on his YouTube channel on April 9th, showing fans how to do the “10 Years” dance from the video.

Freyr performed at the Icelandic Hlustendaverðlaunin (People’s Choice Awards), winning “Video of the Year” and “Song of the Year” in the ceremony on April 10th.

Daði announced that he and his wife Árný were expecting a second baby in September on April 26th (congratulations guys!), and a day later shared his delight in earning a silver award from the UK for sales relating to his 2020 entry “Think About Things”. On their departure from Iceland, the band shared photos of the Gagnamagnið 2.0 bus that would take them to the airport as they flew to Rotterdam on May 9th.

Iceland’s Daði og Gagnamagnið will perform “10 Years” in the second semi-final of Eurovision 2021 on May 20th, performing eighth on the night.

What do #YOU think of Iceland’s entry for 2021? Share your thoughts on this article in the comments below, on our forum HERE and on social media!