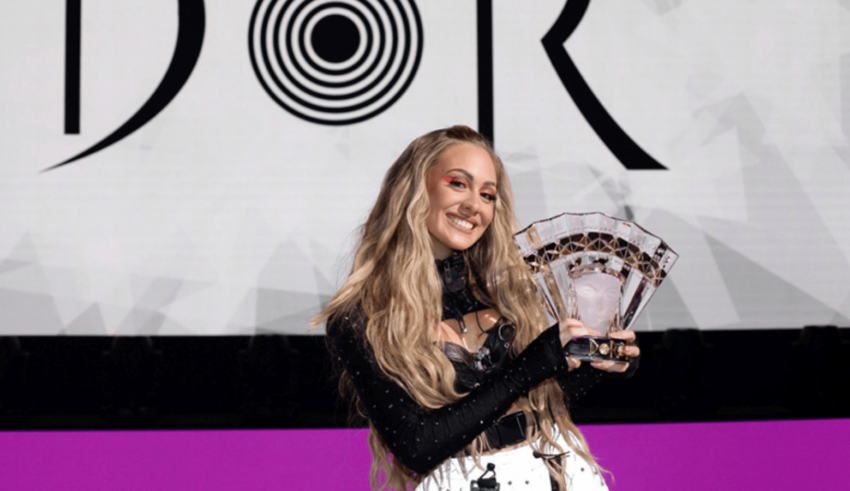 As rehearsals continue in Rotterdam, we continue to profile all 39 participants in this year’s Eurovision Song Contest.

Next up, we take a look at the rising talent of Albina, who has already made a name for herself in The Voice Hrvatska and as the winner of Dora 2021. What steps await the young singer next?

Albina Grčić is a 22 year old singer from Split, born on 6th February 1999 to an American expatriate father of Volga German descent and a Croatian mother, and grew up surrounded by music. She graduated from elementary music school and can play the piano.

Albina’s singing career took off from the age of sixteen in televised singing competitions in Croatia. In 2015, Albina auditioned for the Adria version of X Factor in Belgrade, Serbia, performing Oliver Dragojević’s “Ako izgubim tebe”. Speaking after her audition, she noted “I didn’t want to sign up for ‘X Factor’, but I’m glad I left anyway. I chose Oliver’s song because my biggest wish is to meet him. I would love to record a duet with him”

The production team of the competition wanted to form a girl group in the competition, with Albina being one of the members. She declined this offer, wanting to remain a solo singer, and subsequently left the competition.

Four years later, Albina returned on the talent show scene, auditioning for The Voice Hrvatska in 2019. She auditioned with Laura Pausini’s song “En cambio no” and had two judges turn around for her; Vanna and Davor Gobac. She joined Vanna’s team, and was initially eliminated at the battle round but was saved by fellow mentor Massimo Savić and joined his team. Her battle round performance with Filip Rudan was a major YouTube hit, amassing over 37 million views.

Albina progressed all the way to the final of The Voice Hrvatska, finishing in third behind Rudan in second (the singer who eliminated her in the battle round) and the winner Vinko Ćemeraš. She signed for Universal Music Croatia after the show, and released her debut single “Imuna na strah” on 16th October 2020.

Outside of singing, Albina was a student of the English language, literature and history at the Faculty of Philosophy at the time of participating in Dora.

How did Albina get to Rotterdam?

Croatia had been heavily linked to offering the 2020 entrant Damir Kedžo the ticket to Rotterdam, following the cancellation of Eurovision 2020 and his inability to represent his country. Eventually, it was confirmed by the Croatian national broadcaster HRT that the national final Dora would once again be used to select the entrant for the contest, with a submission window opened on 26th October 2020.

The submissions process for Dora 2021 stayed open until 10th December 2020, where it was revealed that 140 entries were received by the national broadcaster HRT. Damir was not amongst the final line-up, and so Croatia would be represented by a new face in 2021.

The line-up of competing entries was announced on 15th December, with two familiar faces in particular; Croatia’s 1994 entrant Tony Cetinski, who would participate alongside Kristijan Rahimovski, and 2016 entrant Nina Kraljić as Alkonost of Balkan.

With a combination of jury voting, televoting and SMS, the winner was clear on the night; Albina’s upbeat “Tick-Tock” triumphed over Nina Kraljić’s Alkonost of Balkan in second place.

The decision caused a stir in the Croatian tabloids, with runner-up Nina alleging that she could not hear her own song in her in-ear monitors during rehearsals and instead was played “Tick-Tock”, while the singer also shared her belief that many people could not vote for her due to telecom problems. She later deleted her Facebook and Instagram pages following the backlash.

How has Albina been preparing for Eurovision since selection?

Speaking after her victory, Albina praised her competitors and shared her thoughts about the “beautiful dream” of winning Dora; “I am not yet aware that I have won the Dora. All of this seems like a dream, and it is a beautiful dream in which I have invested a lot of effort and love. Thank you to my entire team, who have been a great support to me over the past months, from rehearsing to performing at Dora. I am happy that people recognized us. The competition was great, and if we had sent anyone else to Rotterdam, we would not have failed.”

Shortly after winning Dora, Albina was nominated for “Best New Artist” in the 2021 Porin Awards, one of the most prestigious award ceremonies in Croatia. It was also announced in late March that her Eurovision entry “Tick-Tock” was nominated for the Cesarica award for “Song of the Year”. The music video for Albina’s song was released to the Eurovision channel on March 11th.

Albina was among the artists who agreed to take part in Eurovision Spain’s PreParty on April 24th with an orchestral arrangement of her entry. Another version of the song followed on the 29th with the “Vintage Version” of “Tick-Tock”.

On May 1st, Albina performed a cover of the song “Husavík”, from the Eurovision Song Contest: Story of Fire Saga movie during the Hrvatski Eurovizijski Klub’s Adriatic PreParty, and on May 7th a remix of “Tick-Tock” was released by Italian producer Stefy de Cicco ahead of Albina’s departure for Rotterdam.

Croatia’s Albina will perform “Tick-Tock” in the first semi-final of Eurovision 2021 on May 18th, performing tenth on the night.

What do #YOU think of Croatia’s entry for 2021? Share your thoughts on this article in the comments below, on our forum HERE and on social media!