Home 2018 Remembering the Eurovision stars we lost in 2018 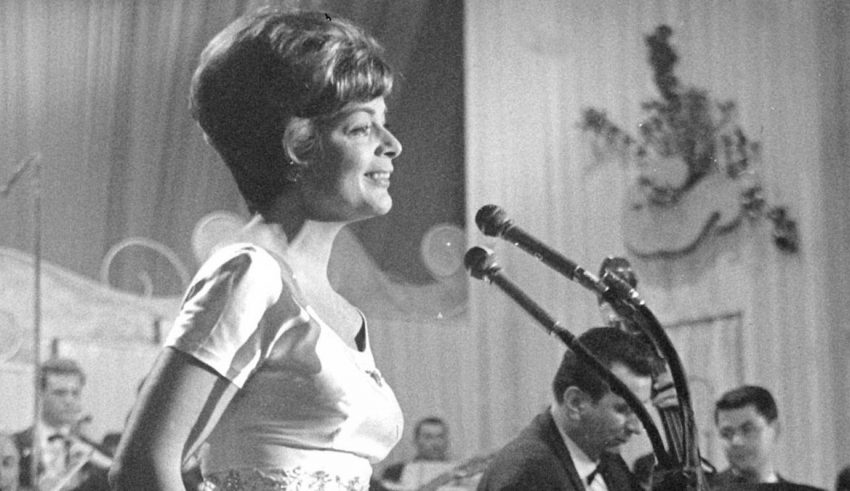 As 2018 comes to a close, we remember and honor Eurovision stars who passed away this year. Stars whose participation and performances provided so much joy to Eurovision fans at the contest and beyond.

Lys Assia
In 2018, we lost the First Lady of Eurovision herself, Lys Assia. Born Rosa Mina Scharer in 1924, Assia started off as a dancer before turning to singing with considerable success in 1950 with “O Mein Papa,” a chart-topper in her native Switzerland. When Eurovision began, it was a no-brainer to send someone of her pedigree and the decision paid off, with Assia winning the very Eurovision Song Contest in 1956 with “Refrain”. She tried again in 1957, and nearly came close to a second victory in 1958 with her 2nd placed “Giorgio”. Assia remained active over the years and close to Eurovision circles, participating in the 50th anniversary celebration and attempting a comeback in the Swiss national selection for Eurovision 2012. A huge presence, the Grand Dame of Eurovision will be sorely missed.

Frances Gall
If Lys Assia was the first, France Gall was the first to give Eurovision a jolt of modernity. Her victory at Eurovision in 1965 injected much needed youth into a contest that was being criticized for being a repeating cycle of ballads and chansons. Even though her performance on the night seemed a little off, her modern ye-ye number “Poupee de cire, poupee de son” stood out and blew away the jury. Penned by famed French composer Serge Gainsbourg, who already had hits with Gall in their native France, they took the song to Luxembourg and won it for them against a formidable field of strong, yet more conservative sounding entrants. Gall’s career continued strongly, performing more experimental pop numbers by Gainsbourg but also moving into German language songs written by Werner Muller, and even a couple early Giorgio Moroder songs. Gall was productive throughout her life, also moving into acting and musicals and humanitarian work before succumbing to cancer on January 7, 2018.

Valters Fridenbergs
Assia and Gall enjoyed lengthy careers, so it is even more tragic when a young performer passes away having only had a few opportunities to cement their legacy. As one half of Latvia’s youthful Eurovision 2005 entrants Valters & Kaza, their “The War is not Over” finished fifth, the third best performance by Latvia to date. A gentle ballad in a noisy year, “The War is not Over” stood out as a tender acoustic guitar driven ballad by two young lads sitting on stools, in contrast to the more rock-driven and bombastic Vanilla Ninja, Wig Wam, Gracia, and Natalia Podolskaya. This genuineness and tenderness carried on for Fridenbergs after Eurovision 2005, moving into television work as a kids’ game show host and becoming involved in Latvian childrens’ dance and singing schools. Sadly, Fridenbergs succumbed to cancer, cut down in his prime at age 30, on October 17, 2018.

Avicii
Another performer lost too soon was Tim Bergling, more famously known as Avicii, the world famous Swedish DJ who cowrote the 2013 Eurovision anthem “We Write the Story” with ABBA’s Bjorn and Benny to open the Swedish hosted contest. A phenomenally successful writer and producer, Avicii had a string of chart-topping hits in Europe and the United States, but the immense pressure, combined with mental health problems Avicii struggled with, began to take their toll. Avicii effectively retired in 2016 and moved to Muscat, Oman, where he was found unresponsive in his apartment on April 20, 2018. A great loss for both music and humanity, Avicii will be remembered for his energetic pop and for his remarkable generosity, having raised millions for children’s charity to combat hunger.

Sabahudin Kurt
A popular Bosnian-born folk act who enjoyed success in the Soviet Union in the 1960s and 1970s, Sabahudin Kurt represented Yugoslavia at Eurovision 1964 with “Zivot je sklopio krug,” which finished joint 13th. Born in Sarajevo in 1935, Kurt was a popular figure in Yugoslavia since 1954 with his hit “Dim u tvojim ocima”. Kurt retired to the Bosnian countryside after triple-bypass surgery in 2007, and passed away on March 30, 2018.

Madalena Iglesias
Despite finishing 13th at Eurovision 1966, Portugal’s representative Madalena Iglesias’s “Ele e Ela” managed to chart in Portugal, Spain, France, and Luxembourg. Iglesias tried again in 1969, but did not make it as Portugal’s representative that year. Iglesias turned to acting, racking up several film and television credits in the 1960s and 1970s, including the oddball cult horror comedy “Os cincos avisas de Satanas.” She passed away on January 16, 2018, in Barcelona of undisclosed causes.

Katie Boyle
Behind Barbara Dex, the most instantly recognizable fashion item in Eurovision history has to be the orange – pink feather boa adorned outfit worn by presenter Katie Boyle at Eurovision 1974. Formally known as Lady Saunders, but more well-known as Katie Boyle, the royal Italian-born English model, writer, actress, radio announcer, presenter, and animal rights activist, Lady Saunders was a familiar face to Eurovision fans, having been presenter of the contest four times in 1960, 1963, 1968, and most famously in 1974 when ABBA’s “Waterloo” destroyed the competition. Also a famous agony aunt for TVTimes magazine, it seemed there was nothing this remarkable woman could not do. Also remarkably humble and charitable, she was the very first contestant to vote herself off “The Weakest Link,” and was involved with the famous Battersea Dogs Home for more than 25 years. Lady Saunders’s passing on March 20, 2018 generated extensive press coverage and outpouring of condolences, reflecting a larger than life whose actions touched and inspired millions. 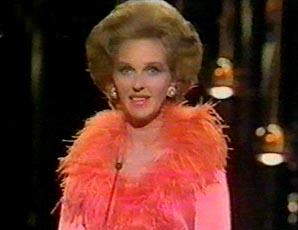 Lill-Babs
Another larger than life personality, Barbro Margareta Svensson, more famously known as Lill-Babs, was a singer, actress and television presenter with a long career outside of Eurovision, where she represented Sweden in 1961 with “April, april.” She competed again in national selections for both Sweden and Norway, and launched a career for herself in both West Germany and the United States, with one of her hits being an early composition for ABBA’s Benny and Bjorn. She returned to Sweden in the early 1980s and appeared in several television shows as actress and presented. She was active right up until her death from cancer on April 3, 2018, with her late career given a boost with a critically acclaimed role in the SVT series “Bonusfamiljen.”

Marianna Toli
As part of the Greek quartet Paschalis, Marianna, Robert, and Bessy which finished fifth with “Mathima solfege” at Eurovision 1977, Marianna was able to propel herself in a long and successful career as a singer, actress, musical theater performer and director. She passed away from cancer on December 29, 2018, but was active for almost the entirety of her career, balancing her busy recording career with such roles as Evita in “Evita”. She was also busy behind the scenes, doing directing duties on several stage productions and musical theater composition. Another Eurovision light lost too soon, Macedonian singer Vlatko Ilievski was found dead in his automobile in Skopje on 6 July, 2018, age 33. Ilievski represented FYR Macedonia at Eurovision 2011 with “Rusinka,” which tells of a Macedonia boy who falls for a Russian girl, and that he would try his damnedest to learn Russian just for her. Despite the bridge building and the colorful traditional costuming, the song failed to qualify for the final, but is still fondly remembered among non-qualifiers. Ilievski continued performing in his native FYR Macedonia, often in a duet or as singer of several rock groups. He also tried again to compete for FYR Macedonia, the last participation being Skopje Fest 2015 to qualify for Eurovision 2015.

Maria Guinot
Born in Barreiro, Portugal, Guinot released two EPs, “La mère sans enfant” and “Balada do negro só” in the late 1960s, then took a long break from the music industry. She returned in 1981 performing a song, “Um adeus, um recomeço”, in the Portuguese Eurovision selection, Festival da Canção, where she finished third. Her second attempt in Festival da Cançao came in 1984, when her song “Silêncio e tanta gente” (“Silence and So Many People”) emerged the winnerGuinot went forward as the Portuguese representative, finishing in 11th place. Guinot continued performing and composing, released three albums and collaborated with many artists. Guinot died on 3 November 2018, from a lung infection at the age of 73

Jürgen Marcus
Marcus was a German schlager singer who was most successful during the 1970s, when he had 14 chart hits in Germany.  His first charting single came in the same year, and he subsequently enjoyed three consecutive top 10 hits in 1972-73, including the highest-charting single of his career, “Eine neue Liebe ist wie ein neues Leben”, which peaked at #2. He was a regular on German TV music shows, and in 1972 appeared in a film, Heut hau’n wir auf die Pauke. In 1975, Marcus took part in the German Eurovision selection with the song “Ein Lied zieht hinaus in die Welt”. Although the song only managed to place ninth, it went on to become a top 3 hit and the last top 20 entry of his career. Luxembourgian broadcaster RTL almost invariably chose their Eurovision entry by internal selection. Unusually in 1976, however, they organised a five-song final in which Marcus participated with “Chansons pour ceux qui s’aiment” (“Songs For Those Who Love Each Other”). He won the selection, so went forward to the 21st Eurovision Song Contest which was held on 3 April in The Hague, where “Chansons pour ceux qui s’aiment” fared less well than expected, placing 14th of the 18 entries. In April 2017, Marcus declared the end of his career, citing chronic obstructive pulmonary disease as the reason.[4] According to his manager and longtime companion Nikolaus Fischer, he died of the disease in the middle of May 2018 in Munich, a few weeks shy of his 70th birthday.

Anneke Grönloh
Anneke was an Indonesia-born Dutch singer. She had a successful career starting in 1959 that lasted throughout the 1960s, and scored a hit with “Brandend Zand”, one of the best-selling Dutch songs of all time. At the height of her fame, in 1964, Grönloh took part in the Eurovision Song Contest with the song “Jij bent mijn leven” (English: “You are my life”), which ended with a joint tenth place with the Belgian entry, and by the end of the 1960s she had begun an international singing career. In 2000, Grönloh was named “Singer of the Century” because of the record-breaking sales of “Brandend Zand”. In the same year, she was also a participant on the television program Big Brother VIPS. Grönloh died on 14 September 2018, at the age of 76.

Do #YOU know of any Eurovision star accidentally omitted? If anyone is missing from this list, please let us know in the comments below, on our forum, or on social media.