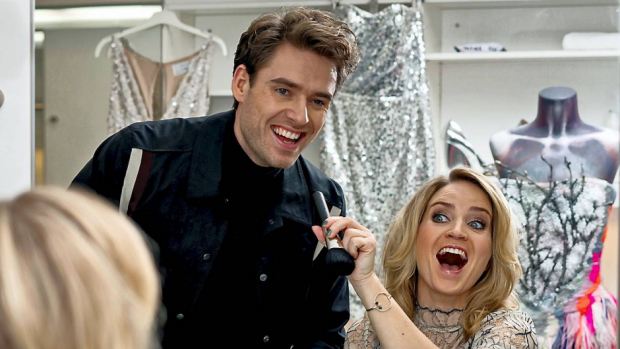 We have our hosts… well, not our hosts for next years Eurovision Song Contest, but our hosts for Dansk Melodi Grand Prix 2017. They are Johannes Nymark & Annette Heick, both of which the Eurovision fans have seen before in the past.

You most likely remember who Johannes is, since he is one of the boys, who represented Denmark at the Eurovision Song Contest in Stockholm, earlier this year. Together with Søren and Martin, they formed the group, Lighthouse X. The group represented Denmark with the song “Soldiers of Love”, which didn’t manage to qualify to the grand final, and sadly finished second last in the second semi-final. Earlier this year as well, the group sadly decided to split up, and instead Johannes now has some free time to tryout new things, which seems being the male of host of DMGP 2017.

Other than that, he has also featured in lots of musicals in Denmark, and has taking part in the Danish version of “Dancing With the Stars”, which is known as Vild Med Dans, where he finished on 2nd place in 2014.

Annette, who is the daughter of Keld & Hilda Heick, is a Danish TV host and journalist. In the Eurovision community, we last saw her as one of the hosts of Dansk Melodi Grand Prix 2016, where she hosted the show along with her mother and Jacob Riising.

Not only has she Eurovision related roots from her parents, but she multiple times also competed in Dansk Melodi Grand Prix, lastly being in 2007 with the song “Copenhagen Airport”. As a singer, she made her big breakthrough in 1988 in a duet along with Tommy Seebach, who as well has represented Denmark in the past, at the Eurovision Song Contest.

When it comes to TV, then we are in safe hands with Annette, since she has hosted multiple TV shows on both TV2 and DR, and also added voices to Danish dubs of numerous Disney and Pixar films.

As they revealed themselves in a video, on the official DR Eurovision website, then they present themselves as the hosts and that we can expect something great.

Despite 2 years without success for Denmark, at the Eurovision Song Contest, they promise that this won’t repeat, and that Denmark is ready to go all the way once again, and mainly that the songs that will take part are gonna be good. We shall see now, cause everyone has their own opinion about that, so to see if they can keep their promise, we must just wait and see until DR decides to reveal the 10 acts that will compete.

The show will take place in Herning, on the 25th of February.