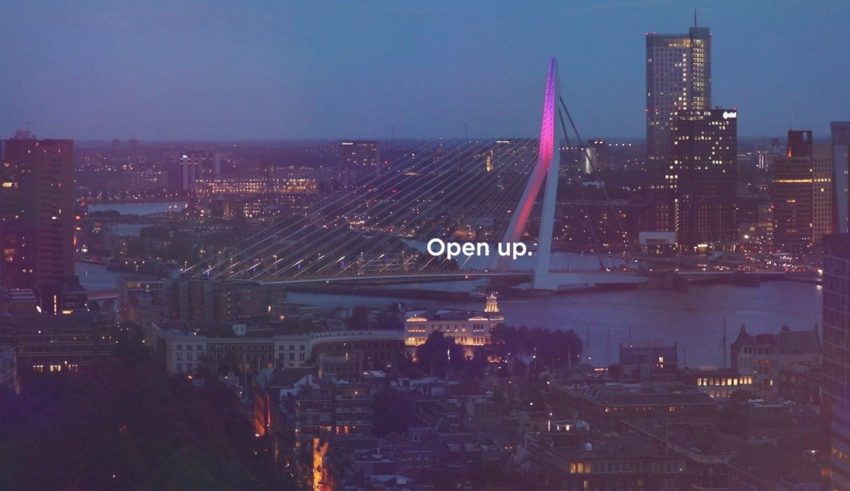 The European Broadcasting Union (EBU) announced today that “Open Up” will be the official theme and slogan of Eurovision 2020, to be held in Rotterdam, the Netherlands, in May 2020.

“The slogan ‘Open Up’ is intentionally incomplete,” said Sietse Bakker, the executive producer of Eurovision 2020. “Open up to each other. Open up to music. Open up to Rotterdam. Open up to… whatever you choose! Feel the freedom to complete the slogan in your own way. That way we get to know each other better,”

“We have looked for a theme and slogan that reflect what the Netherlands stands for and which the Dutch can identify with,” Sietse continued. “A country with an open mind to the world, where we speak our mind, with respect for each other. We also found it important to choose a theme that reflects the spirit of our times. People are concerned about increasing polarization and freedom isn’t as self-evident for everyone as it should be. With the slogan ‘Open Up’, we warmly invite people to open up to others, to different opinions, each other’s stories and of course to each other’s music.”

The press release for the slogan elaborated that “Open Up” continues the spirit of the contest, where a continent ravaged by World War 2 sought a cultural exchange event that would bring together previously warring nations through the medium of song. Since the inaugural event on May 24, 1956, EBU Executive Supervisor of Jon Ola Sand argued that opening up has been a theme of the event all this time.

“Open Up is the perfect slogan for the Eurovision Song Contest as it celebrates its 65th edition. In 1956, only 7 countries could watch the competition and since then we have opened up to the whole of Europe, to Australia and now, via streaming, to the whole world. The values of the Eurovision Song Contest are universality and inclusivity, and our proud tradition of celebrating diversity through music. Now we can add a new one – that of openness.”

Needless to say, initial reaction to “Open Up” has been mixed on social media.

Open up to music🎵
Open up to each other👨‍👨‍👧‍👧
Open up to new ideas💡
Open up to realness👊
Open up to Eurovision🎙#OpenUp| #Eurovision| #ESC2020🇳🇱 pic.twitter.com/iFv5iB5YFx

Some Twitter users, such as AJ Heraghty posted supportive messages and examples of how the contest has brought people from other nations together.

I met one of my now best friends in the YouTube comments section of Turkey’s entry in 2009. We’ve been to the contest four times since (2014, 15, 16 & 18), and I’ve been to visit her in Oslo seven times. Been friends ten years now. Thank you for bringing people together. 🇮🇪🇳🇴

However, some others have criticized the ambiguity and have been posting memes on other cultural references to “Open Up.”

What do #YOU think of “Open Up” as the slogan and theme? Do #YOU agree in spirit with the theme, if maybe not the slogan? Let us know in the comments below, on social media, and in our forum.