Home 2019 Oh, Say Can You See the Americans who Participated in Eurovision 2019 and its National Selections? 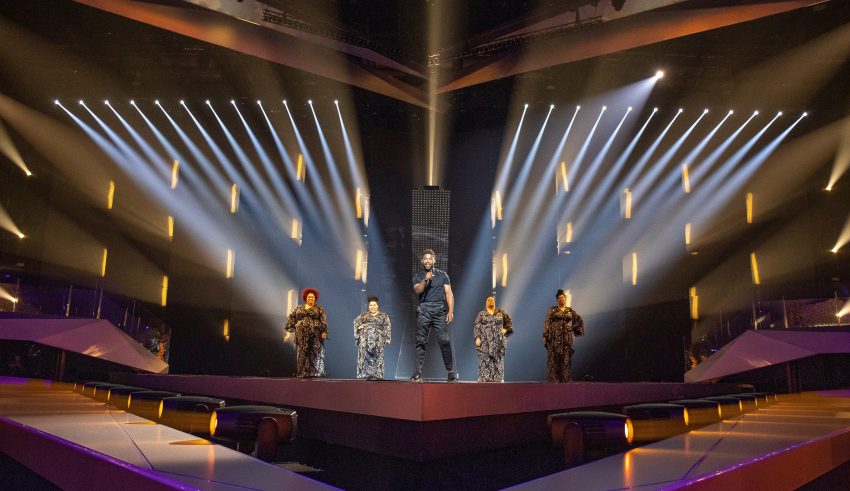 Happy Independence Day to our American readers, or Happy Traitors’ Day if you are of an English persuasion!

Despite the day being a celebration of telling Old Europe where to stick their old order, why not use this day to highlight Americans who participated at Eurovision 2019 in Tel Aviv or in the national selection process?

Americans have had almost two dozen participants in the contest proper over the years, including a winner (Katrina Leskanich of Katrina & the Waves and “Love Shine a Light” fame, and “Walking on Sunshine” fame if you’re an American reader who’s been sleeping behind a dumpster at a 7-11 in Victorville, California these past two and a bit decades). And America, a country that gave us musical excellence from Miles Davis to Korn’s Jonathan Davis, will continue to be used to compete in Europe’s premier music contest.

Let’s start with the Americans who made it to Tel Aviv. Not as many as the Canadians who made it to Tel Aviv this year, but we forgot about Canadian Independence Day (July 1) because they asked politely to part from the British, and being polite is not our current our president’s jam (neither is competence, honor, wit, strategy, intelligence, morality, etc.), so there you go.

The Mamas are the female quartet who backed John Lundvik on “Too Late for Love.” Ashley Haynes is a 32-year-old Washington, D.C. native who moved to Sweden before Melodifestivalen to pursue her dream. And it worked out fairly well for her as she landed one of four spots as a female backing singer for Melodifestivalen 2019 winner and Swedish representative John Lundvik.

A soulful ballad, the song really gets going once The Mamas kick in on the choruses, and placing fifth overall seemed a disappointment given the low televote relative to the high jury vote (the opposite of what happened to Scandinavian neighbors Norway). Anyway, the hype for “Too Late for Love” going in to Tel Aviv was deserved, and it’s largely down to the powerful chorus by The Mamas.

Alright. We jumped the gun in calling Azerbaijan as a likely entry for Junior Eurovision 2019. And by we I mean me. Mea culpa. That old Vietnam vet who hangs out at the end of the bar at Schooner’s in Palmdale, California, is usually so reliable when it comes to Junior Eurovision tips. In 2018 he stared me dead in the eyes and said, “Angelina, no, she ain’t gonna win. The Poles, they know! Yellow jackets gonna sting Macron in the $%&#.”

Anyway, Trey Campbell, who has a songwriting credit on Bulgaria’s 2018 entry “Bones” by Equinox, is back with a credit on Chingiz’s superb “Truth,” alongside Borislav Milanov. Born and raised in North Carolina, Campbell is now based in Los Angeles, and helped Azerbaijan to 8th place at Eurovision 2019, their best result since Farid Mammadov’s “Hold Me” in 2013.

Also listed as a songwriting credit is Pablo Dinero. The only Pablo Dinero I could find online and whose resume would allow him within waxing distance of Chingiz’s chest is the Pablo Dinero who is a hip hop artist originally from Buffalo, New York, a fertile music ground that also spawned Rick James, The Goo Goo Dolls, Cannibal Corpse, and America’s most excellent yet cursed melodic death metal band Sons of Azrael. If this is or is not the same Pablo Dinero who contributed to “Truth,” let us know, as there’s an old Vietnam vet with whom I have a score to settle.

Four words: Say Na Na Na. Yes, American poet and lyricist Applegate, who has written lyrics for Kylie Minogue and Modern Talking, as well as everyone’s favorite singing grannies Buranovskiye Babuski on “Party for Everybody,” contributed lyrics to Eurovision’s own version of Andrew WK, the Prince of Positivity himself Serhat, and his 2019 entry for San Marino “Say Na Na Na.” I say f&%$ you to anyone who dislikes this.

Boris Milanov and Joacim Persson showed up again with another songwriting credit at Eurovision 2019 on Michela’s “Chameleon,” and this time was joined by Nashville, Tennessee based songwriter Paula Winger. Winger has written for and contributed vocals to projects by Winger (yes, Kip Winger’s band) and Miranda Cosgrove, and can now add Gozo’s own Michela Pace to her resume alongside Kip “I am a more than the glam metal guy who wrote Seventeen, dammit” Winger.

We know this performance went down as well with the locals and Eurovision fandom at large as the Hindenburg. So the less said about this American duo as the interval act the better.

And now we cut to a few Americans who, to varying degrees of success, were in the national selections but did not make it to Tel Aviv.

Everyone and their mother had Chicago native Laura Bretan as the winner of Eurovision 2019 as soon as her video for “Dear Father” came out. She had America’s Got Talent, Romania’s Got Talent, Real Housewives of Beverly Hills ex-husband of Yolanda Hadid, David Foster, in the bag, what could go wrong when it came to Romania’s national selection?

Everything, as it turns out. If it wasn’t for Ukraine’s Vidbir fiasco, Romania would have earned the award for worst national selection of 2019. What were they thinking having six jury members (the less said about their “qualifications” the better) with the televoters’ input being equivalent to only a seventh jury member? And what were Bretan’s parents thinking sticking her in a “traditional marriage” political ad a couple months before?

Bretan’s still very young, and may emerge as a different performer once she escapes her Pentecostal parents’ orbit, so don’t judge her on a video she was stuck in while legally a minor. But Bretan’s “Dear Father” is a defeat snatched from the jaws of victory at Eurovision. As an aside, I do want to know what beef Eurovision 2013 winner Emelie de Forrest has with Bella Santiago’s “Army of Love” to be the only judge to not give points to her entry.

Also hailing from Chicago, American-Norwegian singer Chris Medina took his shot at Eurovision this year by entering “We Try” at Norway’s Melodi Grand Prix. Already famous for his Billboard Hot 100 charting song “What Are Words” from 2011, Medina’s entry into Melodi Grand Prix 2019 was a big deal. Not big enough, though as the 35-year-old Medina was eliminated in the first round. Hopefully the American Idol alumnus and talented singer and multi-instrumentalist takes another shot in 2020 as Melodi Grand Prix’s overhaul and expansion opens the field to a wider group of artists.

We have covered New York City native Matthew Dane Livingston and his contribution to Alen Chicco’s phenomenal finalist for Lithuania “Your Cure” before. And for good reason, as Livingston’s eccentric choreography was a perfect match for Chicco’s eccentric art-pop. A sizable enough group of fans kept Chicco going through to the Nacionaline Eurovizijos Atranka final, but unfortunately a dreadfully dull song that makes me want to put my head through a window to keep me awake by the love-child of Harry Connick Jr and Falco won, and then failed to make it to the Grand Final in Tel Aviv.

While “Run with the Lions” bombed, Chicco released “Sexy Song,” and only went and organized Lithuania’s first ever nationwide drag festival, disproving the notion that he’s only a “novelty national selection act.” Indeed, Chicco is using the fandom from Nacionaline Eurovizijos Atranka to be an Eastern European LGBT pioneer, and it is critical that we from Los Angeles to Kaunas support his endeavors however we can. Livingston played an instrumental role in building up the legend who will be Alen Chicco. Dare to love, and we’ll propel Chicco to Eurovision glory.

Yes, the “running” guy from Hungary by way of his birthplace of New York City Andras Kallay-Saunders was back in 2019, this time with rapper Farshad Alebatool as the duo The Middletonz. And their entry, “Roses,” was the tempo-shifting hip hop of Kallay-Saunders’s 5th placed “Running.” Though “Roses” made it to the final, it did not make it to A Dal 2019’s Super-final, where another repeat entrant in Joci Papai prevailed.

As we go through summer, ESC United is doing a country-by-country recap of the past decade (that’s 2010 – 2019 for the Math-inhibited), and my nomination for “Best Depiction of America in a Eurovision video 2010 – 2019” belongs to Frenchman Jessy Matador’s underrated dancehall entry for Eurovision 2010 “Allez Ola Ole” which, shocker of all shockers, makes Miami look like a fun place to party in his official video. Which we would have known from watching Vanilla Ice, Will Smith or Pitbull’s music videos or LuAnn De Lessep’s arrest video.

Who do #YOU think is America’s best contribution to Eurovision? Do #YOU know of any American writers or performers we missed? Let us know in the comments below, on social media, or in our forum.