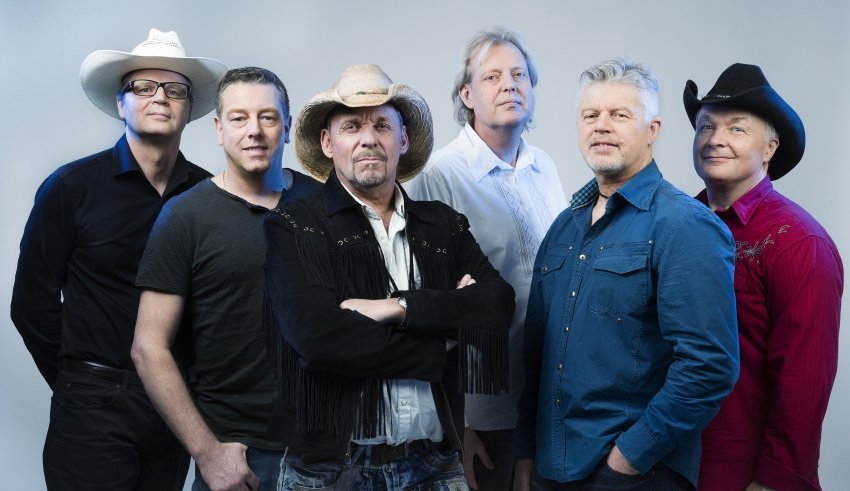 The national final season will soon end. Norway will air it’s Melodi Grand Prix on 11th March. 10 acts will compete against each other and the winner will represent Norway in Kyiv this May. This year, international juries will be reintroduced into the Melodi Grand Prix format; international juries were previously used to select Norway’s entries in 1985 and 1995, which resulted in the selection of songs that went on to win the Eurovision Song Contest. Today the Rune Rudberg Band has spoken to us about their entry “Run Run Away”

Hi! We are Rune Rudberg Band, and we are feeling good.

This band has been together since 2013, but Rune rudberg has been a very popular solo artist in Norway,Sweden and Denmark since 1988 .

Rune: My first hit ” Ut mot havet” was released in the summer of 1988 – and has became one of the biggest hits of the 80s in Norway.

And here is the rest of the band:

And we all sing.

Your song that you will be presenting for the Noregian Melody Grand Prix is “Run Run away”. What can you tell us about the song?

The song was sent to us by the swedish songwriters.  Rune has rewritten some of the lyrics after it was ready for the Norwegian Grand Prix.  It is a catchy country pop/rock tune – and very easy to learn.

What was the inspiration for the song, and did you write it specifically for the Norwegian Melody Grand Prix and Eurovision?

This question is for the songwriters – but we in the band liked it a lot from the first time we heard it.

In Scandinavia the Eurovision song contest used to be the only way to get some kind of international success.  These days it is a good way to promote a new single.  And that’s really what we do.  This is top entertainment.  We are not able to see the show each year, because we’re playing shows almost every friday and saturday.

Rune: My favourite entry is: Waterloo!

We would love to play the grand Ole Opry in Nashville.

It is a good way to release a new single , isn’t it?

Whats the one thing that might surprise people about you?

Hmmmm- that we don’t have alcohol in our rider!

Hopefully back at home

Be yourself and never give up no matter what happens.

Rune: One track on my newest solo-album Kindly Keep It Country is called If I could live my life all over again.  And maybe that song is about my life?

We have just bought a new big tourbus.  A typical day is getting into the bus after breakfast and spend some hours on the road before arriving in the venue where this nights gig is taking place.  Then putting up the gir, doing the soundcheck –have a meal – and playing the gig.  Then bring the gir down and back in the tourbus .  We have beds and kitchen and sofa and tv and everything we need in that bus.

You can listen to Rune Rudberg Band’s song Run Run away on this link below: