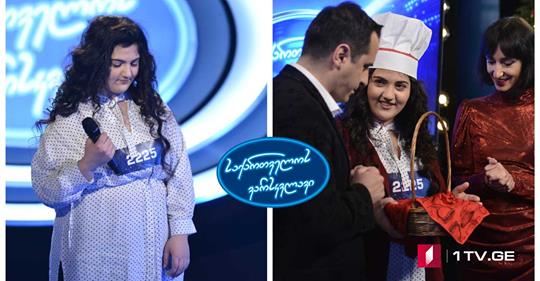 You know what the best way into the judges’ hearts on “Georgian Idol” is? Through their stomachs, as two contestants found out when they brought food to Audition Night Number Two.

Last week, nine golden tickets were handed out, and this evening another eleven were added as auditions commenced to find the next performer for Georgia at Eurovision. Next week, there will be a third night of auditions, and the four judges – Stephane & 3G’s Stephane Mghebrishvili, “Unser Lief fur Lissabon” and X-Factor contestant Natia Todua, Georgia Public Broadcaster’s (GBP) Media and Communications Director Tinatin Berdzenishvili, and head of London-based Bravo Records Zaza Shengalia – will begin deciding which golden ticket recipients move on to the next round.

First up, and offering savory muffins to the judges, was young baker and singer Liza Mebonia. If you’re a professional trained baker in a country with some of the world’s best baked goods (khachapuri!), that offering is going to win you points. Ultimately, it was her performance that won her a golden ticket, and it will inspire me to find something to bake from Tiko Tuskadze’s excellent cookbook “Supra: A Feast of Georgian Cooking” later on today.

If baking isn’t in your wheelhouse, flattery can work, as Pine Kapanadze found out in complementing Zaza Shengalia’s Beatles jacket. If I was to try accurately describe Pine’s performance, I’d have to say she’s Franka Potente impersonating Bjork doing Janis Joplin. Sometimes in national selections and other singing contests you find performers trying too hard to be oddball, but being an oddball is natural to Pine, with her red bangs, wool jackets, giant wool scarves and Goth make-up. Her Joplin cover was enough to earn her a golden ticket.

Third up, and former X-Factor Georgia contestant in 2015, was Giorgi Pruidze, doing his take on Seal’s “Kiss from a Rose.” Despite a haircut that belongs on 2001 era Jared Padelecki, who played Dean on “The Gilmore Girls”, he did enough to progress.

Next up was a fun bait and switch, when sight-impaired guitarist Gedevan Kevlishvili switched it up and did rapping for his audition, impressing Natia Todua. To seal the deal, Gedevan’s grandmother was on hand with homemade jam to win over the judges. Natia in particular was impressed with the brazenness and humor in Gedevan’s performance.

If you were watching the next contestant, 44-year-old Imeda Davitadze, who seems to have a sizeable following on social media based on his YouTube video antics, on the Georgian Idol Facebook stream, you were “treated” to a very meta-performance as he live-streamed on Facebook his entire audition. As chuckle inducing as it was, no golden ticket as you need to be able to actually sing for a singing contest.

The next two contestants were subject of a bit of media interest last week as they are both relatively famous for having entered singing contests in the Ukraine: brothers Otto Memzadze, 29, and Beso Memzadze, 27. Otto wowed audiences on The Voice of Ukraine and Beso got far in X-Factor Ukraine. Otto kicked off with a slowed down, yet powerful soul take on Michael Jackson’s “Billie Jean.” If you can like Otto’s voice to a Chevrolet Camaro, his brother Beso’s would be a Saab 9-3. Beso’s performance was a smooth jazz number, which will make for an interesting battle of the brothers and a contrast in two very different styles as Georgian Idol goes on, as both impressed enough to earn golden tickets.

Georgians are known for their dark humor, and hosts Vaniko Tarkhnishvili and Ruska Makashvili kicked off the next audition with a JFK assassination joke. Introduced and named only as Marilyn Monroe, the next contestant began with a performance of “I want to be loved by you” and halfway through ripped off her white dress and jacket to reveal a black outfit underneath, launching into AC/DC’s “Highway to Hell.” Seducing “Mr. President” in judge Zaza Shengalia was enough for a golden ticket.

The next audition was another one hyped by the Georgian press this week: 36-year-old transgender singer Anastasia Pirveli. It is a first that an openly LGBT performer has tried out for Eurovision in the entire Caucasus region, and ESCUnited reported on the significance of this story and Anastasia’s willingness to stand up and represent. But as this is Georgian Idol, the next question is, can she sing? Anastasia’s social media page hinted that we’d be in for a nightclub smooth jazz number, and that is exactly what we got. Subtle, understated, given a golden ticket.

Fans of Junior Eurovision will immediately remember our next contestant: Iru Khekanov, who was a member of the Junior Eurovision 2011 winning group Candy. The song she performed was a Sia number, who you may recall puts out nothing that sounds like Candy’s “Candy Music.” There was a little bit of confusion over the stylistic switch as the judges felt she chose a song that may not be the best for her voice, but she got a golden ticket regardless.

Another X-Factor alumnus followed in Dima Kobeshavidze, who did enough with his rendition of the blues song “Make It Rain” to move on. The judges were intrigued by his maturing over the years from his teenage performances to the mature, more soulful 26-year-old who showed up to audition.

Not at all mature, despite being obviously older than Dima, was a “comedy” performance by a rapper named Sacha. He didn’t impress with a terrible cover of Afroman’s “Because I got high”, and some of the other contestants he interacted with backstage gave the impression they found the 30-year-old white guy in a marijuana bandana and aviator glasses to be a bit repellent. Next up and not receiving ticket was a pregnant woman in an ugly Christmas sweater trying to lead a sing-a-long of The Beatles’ “Hey Jude.”

They saved the social media favorite for last, and also receiving a golden ticket was 17-year-old Lisa Kalandadze, another contestant familiar to Georgian singing contest fans. Her take on Nat King Cole’s “Nature Boy” impressed, and her next song was a clever showcase of her vocal skills in her range and how she can hold a note. She understands that this portion of the Eurovision process is focused on the singing only, so she gave a performance that exactly showed what she could do for the judges. Unless a shock is coming down the line, expect Kalandadze to be a firm favorite.

Next week, there will be more auditions, including some contestants who may be familiar to the Georgian public, and the process of winnowing down the golden tickets will begin as Georgian Idol moves beyond the audition phase. The GPB opted to use the Georgian Idol format to find their next singer after two years of internal selection resulted in non-qualification from the semi-finals at Eurovision 2017 and Eurovision 2018. Additionally, the song entry will be selected separately, with submissions to be incorporated into the later rounds of the show, though the CPB’s call for the public to submit their entry is still open until February 1, 2019.

What did #YOU think of the second round of Georgian Idol? Are there any contestants in particular who impressed #YOU? Comment below, in our forums, or on social media.